Stay Positive In Negative Temps – Fish In An Otter! 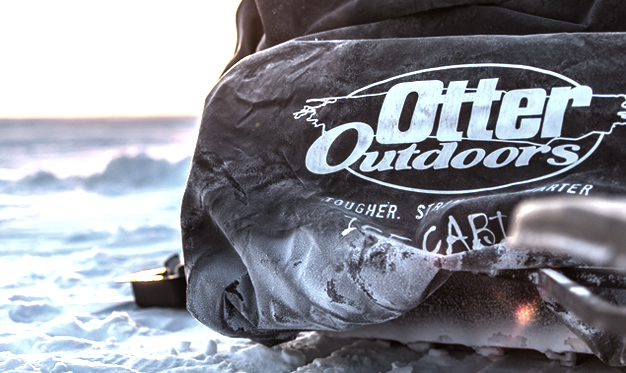 Stay Positive In Negative Temps – Fish In An Otter!

When the high temp is a negative number, Brad Hawthorne is positive his clients appreciate his full-thermal Otter portable ice houses.

“I’ve got 15 Otter Lodges out there on Upper Red Lake right now,” says the ICE FORCE pro and fulltime fishing guide. “The windchill is 43 below, but it’s 86 degrees in those Otter shelters – we’ve got a thermostat in one, so we know. It’s absolutely beautiful in ’em.

Even in a deep freeze like the one blanketing the Ice Belt of late, the coldest Hawthorne’s clients will ever be is on the ATV ride out onto the ice. Once they’re inside an Otter and fishing, they’re comfortable and content.

“In any other type of portable shelter when it’s this cold, condensation is just instant, and it will get cold inside,” Hawthorne says. “With the Otters, we don’ have to worry. The lofted insulation doesn’t fill up with moisture because the 1200-denier shell breathes even as its blocking out the wind.”

While conducting an interview for this article, Hawthorne is sitting comfortably in an  Otter Pro XT1200 Lodge that’s easily holding back a 30-mile-an-hour wind. “There’s no breeze through this portable,” he says. “That 1,200-denier shell absolutely blocks it. I don’t know what more of a test you can put a shelter through.”

Thanks to the Pro XT1200’s superior shell and insulation, anglers fishing in them will save on propane gas, Hawthorne says.

“Instead of setting your heater on medium, you can run it on low and be more than comfortable,” he says. “I can run a 20-pounder in a Pro XT1200 Lodge 24 hours a day and it will go almost a week and a half. In an un-insulated shelter, you’ll be lucky to get a couple days off that.”

An interior draft skirt and extra-long perimeter skirting provides additional comfort by denying stiff winds a ground-level invasion. They save on set-up time as well.

“You no longer have to bank the entire shelter,” Hawthorne explains. “Which is a really nice touch. That one extra minute you don’t have to stand out in 45-degree-below weather, you really appreciate it. It saves you a little bit of time there.”

Otter portables save time too when its time to bring your limit home to clean.

“When you go to pack them up, they fold nicely, just like a blanket,” Hawthorne says. “Having it easily fold up and not having to fight with it is a huge, huge deal. Especially after the sun goes down, when it gets even colder. Every second counts.”

The Pro XT1200’s shell also features crack-resistant windows equipped with insulated covers. “So you can keep out drafts or let in light on warmer, sunny days,” Hawthorne says.

When you invest in an Otter Pro XT1200, “you’re not just buying a portable for this year or for next year,” Hawthorne says. “The 1200s are made to last a lifetime. The shells more than match the durability of Otter’s famously indestructible sleds.”

Built around the legendary, roto-molded Otter Pro Sled, the Pro XT1200 is highly portable and features an oversized telescoping aluminum square-tube frame that’s sturdy enough to stand up to the fiercest blizzards the tundra has to offer.

The Pro XT1200 features an exclusive cross-link seating system with multi-directional deluxe padded swivel bucket seats. Its flip-over design allows anglers to use this house in a variety of positions. Whether sitting or standing, the house provides plenty of head and legroom that fishermen and women will appreciate as they work over hard water.

Ready to deploy at a moment’s notice and a cinch to tow, the Pro XT1200 boasts a custom trim-lock system that enables owners to attach the house to the sled in as little as 30 seconds.