He is called the “Godfather” of ice fishing. Dave Genz of Clam Outdoors is known and respected throughout the ice fishing world regardless of where you live or what products you favor using. Dave is the inventor of the flip over collapsible fish house as well as an influencer in rods, reels and tackle in the ice fishing industry. This year marks 40 years since the flip over “Fish Trap” fish house was introduced. Recently, I had the privilege for the first time to spend some time in a fish house and actually ice fish with Dave Genz on Lake of the Woods. When Dave first thought of the idea, he wanted warmth and didn’t want others to see what he was catching. The idea of the flip over was derived from the old baby buggies. Basically it was a wooden box with poles and fabric strategically attached so it could flip over. Dave’s wife would sew the fabric in the early days. 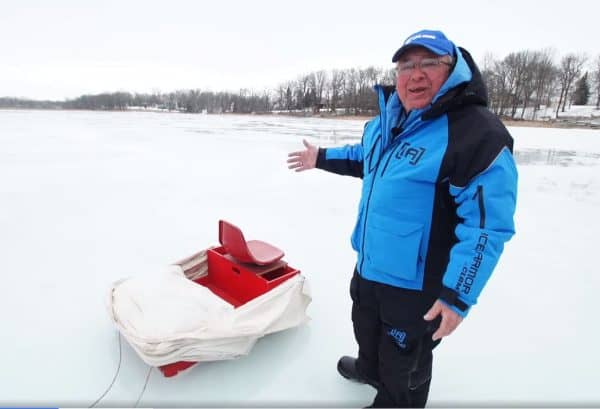 From the original Fish Trap to the flip overs we have today, there have certainly been some great modifications. Very hard durable sleds, state of the art fabrics, insulated fabric, additional doors for conveniences and many options to trick your fish house out just the way you like it.

It would be interesting to see where ice fishing would be if it wasn’t for folks like Dave Genz. Would we have the flip over fish house? What innovation did that spur on?

In the early days, Dave would take his fish houses to bait shops hoping they would purchase one for display. He mentioned often times the owners of the bait shops, who are normally very avid anglers themselves, often times would end up using that initial fish house for themselves and end up purchasing another to sell. In essence, they ended up being mini ambassadors for those early products. It started out by The Godfather selling one house at a time basically out of the back of his vehicle. What a neat story.

One of the things I so appreciate about Dave Genz is he is humble and a real guy. Despite his reputation in the ice fishing industry and notoriety, his down to earth nature and willingness to chat about ice fishing is refreshing. He is also one heck of a stick.

While I went with the normal lures and presentations that catch LOW walleyes for me, Dave was working some different methods I certainly had my eye on. Using a few wax worms on a new Clam jigging spoon was one of them. Yes, he definitely caught fish on it and with the huge expanse of mud basin with all of the living critters walleyes and saugers eat out of the mud, it made sense.

The event that brought us together was Ice Team University. Each year, Clam Outdoors has a university at a different location across the ice belt. It is an opportunity for participants to break up into small groups and fish with Clam pros. In the evening after dinner, the pros will put on seminars discussing different topics about ice fishing that as you can imagine, resonate well with this kind of audience. The learning that takes place rubbing elbows with guys and gals who are passionate about ice fishing is valuable. Let’s just say there is a lot of unconscious competence at an event like this.

The below video was part of Midwest Outdoors filming at last year’s Ice Team University which took place on Lake of the Woods at Arnesen’s Rocky Point.