Fly In Ice Fishing in Minnesota

45 seconds ago by Keith Worrall Often times, when people talk about a fly in fishing trip, the thoughts turn to summer and Canada. There is now another great option that puts you in the heart of world class walleye fishing without having to cross the border. Lake Country Air now does fly in trips to Minnesota’s Northwest Angle. The fly in adventure is incredible. The Kodiak they fly can take up to 8 passengers. This turbo prop plane is comfortable, equipped with leather seats and high end headphones with mics to communicate with others in the plane as well as the pilot.

Lake Country Air is based out of South St. Paul, MN and is where some groups board. This is also convenient for those flying into MSP as the airport is a short shuttle ride or Uber away. The fly in service also does a lot of flights across the lake from the Baudette International Airport and the Warroad International Airport as well.

Small groups can literally catch the plane from most airports in the five state area, flying right up to both the south end of the lake as well as the NW Angle.

Recently, I had the privilege of hooking up with Larry Smith with Larry Smith Outdoors and his crew to film an ice fishing show with the flying service Lake Country Air as part of the adventure. We caught the plane in Baudette and took the 15 minute flight across the lake. Seeing Lake of the Woods from the air is special. It gives you a different perspective on the lake, islands, how resorts have their fish houses laid out, how the ice formed, etc.

We weren’t nervous flying but I have to tell you, the pilot was top notch and really made the experience worry free. We could tell from the way the plane was kept and the thoroughness of the pilot we were in very good hands. When doing a fly in up to the NW Angle, the plane lands on a well plowed and groomed ice runway. This serves all of the Angle resorts and was as smooth as a runway for both landing and taking off. It was also pretty cool!

Upon landing in the late afternoon, the resort we were staying loaded us up in their bombardier and took us right out to the fish house. In this case, the house was set up in fairly shallow water, about 17 feet, to target the morning / evening bite.

We had action as soon as we stepped into the fish house. Using a combination of jigging and deadsticking a live minnow, there was action. That night, we filled the bucket with the anticipation of a delicious fish fry of fresh walleyes that evening. 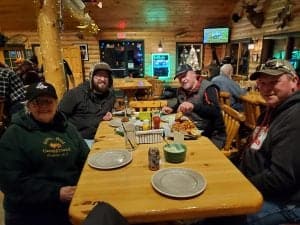 The ice guides clean the fish and either prepare them to either take home or to cook that evening. As mentioned, we wanted fresh fish so the filets were delivered to the cook.

For those doing a fly in and staying at a resort without a bar or restaurant, preparing a meal of fresh fish in their cabin is certainly a tradition for many. It also provides the opportunity to cook up the fish in a variety of ways. There is nothing like a meal of fresh walleyes when staying up at Lake of the Woods.

Our fish fry with all of the trimmings accompanied with our favorite beverage was just what the Doctor ordered. A really incredible day. During the day, we did some exploring of the Angle. Using a small vehicle, we used the resort ice roads to look at other resorts, check out the Northernmost Point Marker, the small post office and explore Angle Inlet which is the mainland. Some resorts are on the mainland, others are on islands. northernmost point buoy winter

After running around, filming the sites around the Angle, I bet you can guess what we did towards evening? You guessed it, we got into a fish house and took advantage of the evening bite.

It doesn’t always work out this way as it is fishing. Even on Lake of the Woods, it is still fishing despite grand expectations. I will say, because it is The Walleye Capital of the World, you always have the chance for something special to happen. In this case it did. I have to say it was probably one of the best ice fishing walleye bites I ever experienced. The fish we caught were between 15 – 19 inches as a rule and we caught dozens. We kept what we were allowed to keep and released the rest. It was incredible. That’s what Lake of the Woods can do. Just like that, you have a 50 fish day, or catch a 30 inch walleye, or a big sturgeon, or a trophy pike. As the saying goes, you never know what you will catch on LOW!

The next day after the morning bite again, we ate a nice breakfast at the lodge and flew back to Baudette.

For those who want a special fly in trip. For those whose time is precious. For those who aren’t able to drive to the Angle through Canada. A fly in fishing trip to Minnesota’s NW Angle might be just what you need.

More info about the Lake of the Woods area