Part 1 – How to Texas rig with evolved ElaZtech® baits

Ladson, SC – (March 29, 2022) – “Even after fishing this amazing bait material for over a decade, we’re still exploring its outer limits and discovering new ways to rig and fish it,” suggests renowned tournament angler, David Walker, among the first to experiment with the new generation of super plastics.

Legendary angler and bait designer Drew Reese, who fished the very first Bassmaster Classic, describes it this way: “ElaZtech baits exhibit the underwater angle all lure companies have been trying to achieve since the early 1900s: to make a bait that doesn’t lie flat on bottom, but that rises up on its own and moves like something truly alive.”

Or, more succinctly: “The bait’s buoyancy breathes life into its claws; at rest, they pop up and flutter, like they’re waving to the bass,” interjects Bassmaster Elite Series angler, Seth Feider, referring to his favorite craw-bait, the Z-Man® Turbo CrawZ™.

“Honestly, don’t know if we’ve realized the full potential of these super plastics in terms of the unique action they deliver, or their longevity on a hook,” says Walker, who’s constantly devising new ways to fish the evolved softbaits. “Most of us look at an ElaZtech flipping bait like the Palmetto BugZ™ and think, well, it kind of resembles other traditional soft plastics. But then you put it in the water, and man, that thing just springs to life. It’s kind of an ah-ha moment.”

For Walker, Feider and other pros who grew up wielding plastic worms, creatures and craws composed of PVC-based plastic baits, the transition toward a softer, livelier and implausibly durable material has been both a revelation and an education.

“Twenty years ago, no one would have believed a bait with such an unlikely combination of advantages was possible,” says Walker. “I mean, soft, lively and durable don’t usually fit in the same sentence, right?”

Yet while ElaZtech’s extraordinary combination of qualities produce livelier underwater movement and more fish per bait, Walker and other pros acknowledge that reaping its rewards comes with a learning curve.

“Because the material is so soft and flexible, it compresses easily,” Walker explains. “This makes ElaZtech baits super effective when rigged on an exposed hook. Baits like the Finesse TRD™ or a MinnowZ™ on a jighead are great fish catchers—and fish-hookers. It’s because their free-flowing movements elicit so many strikes; and because the soft compressible material moves out of the way and allows the hook to penetrate.

“With Texas rigging, it’s a slightly different story,” he admits. “Keeping the hookpoint hidden in the soft material was the first challenge, but also a great exercise in learning how ElaZtech works.” Following countless trials with different hooks and rigging configurations, Walker, Feider and other pros landed on specific schemes that produce high-percentage hookset ratios.

For Walker, rigging routines for baits like the Hella CrawZ™, Turbo CrawZ™ or Palmetto BugZ depend on light versus heavy flipping situations. In light cover, Walker leans on the Palmetto BugZ, rigging it on a 4/0 wide gap EWG hook. “Slide the hookpoint into the bait’s head and back out about three-quarters of an inch down,” he explains. “Rotate the bait 180-degrees and pull the body slightly forward before planting the hook back into the bait’s belly, pushing the hookpoint just through the material. Then, slide just a ‘skin’ of ElaZtech back over the hookpoint for a light barrier of protection.

“This is a great method for flipping or pitching into sparse brush or grass, where you’re just sliding the bait through the cover. The ElaZtech material’s so pliable that just a regular hookset is enough to penetrate a bass’ jaw. The resilience of the material also means you can rig and re-rig the bait dozens of times without wearing it out.”

Walker’s second rigging method is reserved for punching or flipping a Palmetto BugZ or a Hella CrawZ in heavier cover. “I go back to the old school way we used to make a Texas rig,” he grins. “Using a regular straight shank worm hook (choose one with a keeper barb, such as a VMC Flippin Hook), push the hookpoint nearly through the material to create a channel. Then, back it off and bury it right into the middle of the bait. I really like this method because when a bass bites, the soft ElaZtech material compresses and slides out of the way, allowing the hookpoint to do its job.

“For Texas rigging—pitching or flipping— I’m slinging the Turbo CrawZ behind a ¼- or 3/8-ounce sinker, pegged in place. I tried a bunch of different rigging and hook options before landing on a plain, 3/0 straight-shank VMC worm hook. A traditional hook gives you that good 45-degree angle between hookpoint and the bait—not in-line or parallel like you get with an EWG hook. Just bury that straight-shank hook about halfway into the bait’s body. The ElaZtech material’s so soft that when a bass bites, the hookpoint pokes right through and into the jaw. Once I started rigging it this way, my hooking percentages went way up.”

To elevate his own hookup ratios, Walker has contrived a few tricks. “First, avoid hooks with knife-like cutting edges, which slice excessively wide openings in the material. To preserve the bait’s integrity and snag resistance, pick a hook with a standard round or cone-cut point.”

If he’s punching heavy cover with braid, Walker ties his hook on with a snell knot. “Regardless of which snell knot version you chose, make sure you start by threading the line through the eye on the bend side of the hook. Done right, when the sinker contacts the inner jaw of a bass, it’ll pivot and drive the hook up into the jaw, right where you want it.”

Finally, says Walker, keeping the bait’s head pinned tightly to the hook eye prevents it from balling up over the hook gap when bass bite. “Make sure you’re using a hook with a nice sharp keeper barb—a chin-keeper. Holds ElaZtech nice and tight. But I go beyond this with a little fly-tying trick that forms a bulletproof bond between hook and bait.

“The trick is to wrap the hook-shank up and around the keeper barb with a layer of fly-tying thread. Secure it with a couple half-hitches or a whip-finish. The thread layer absorbs and holds drops of superglue, which bonds an ElaZtech bait almost permanently in place.

“Seriously, when you’ve hooked your twenty-fifth bass on the same single bait, and you’re actually pondering replacing the hook before grabbing a fresh craw, it kind of blows your mind for a minute.” 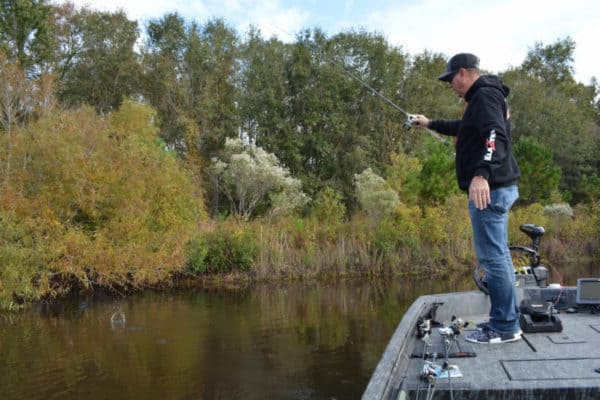