Open water, warming temperatures, plenty of places to fish, and a great walleye population make Devils Lake high on most angler’s Bucket List. The area boasts a contingent of quality guide services, ready for two fishermen to dozens of friends and family.

This North Dakota community loves to host fishermen, young or old. Male and female. Families. They fish with guides in space-ship equipped modern boats. Visitors may also patrol 25 miles of shoreline access fishing spots which are very good for the next month. 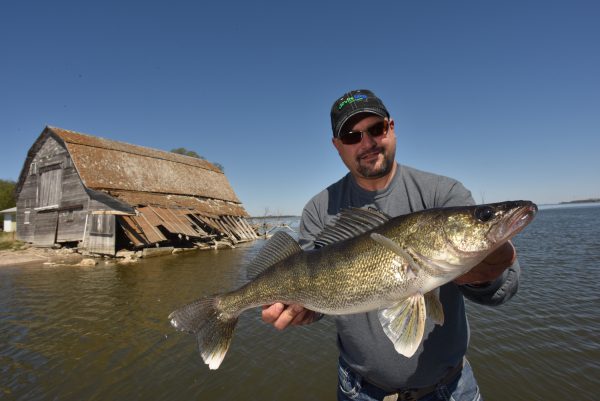 Jason Feldner of Perch Eyes with a nice walleye.

Walleyes are the main quarry, but expect pike and white bass to tackle anything tossed into the sprawling 180,000-plus acre lake in north-central North Dakota. The guides are already on the water or preparing for the start of their guide seasons within the week. Several offered their early prognostications.

Aaron McQuoid, owner of McQuoid’s Outdoors (701-351-6058), and his three full-time guides are preparing their new Ranger and Nitro boats, gear, assembling rods, reels and lures to create smiles from hundreds of clients. McQuoid said, “The fish are hitting, with a number of 22 inch walleyes and quite a few 25 to 27 inchers netted. It looks like another good year.”

Most walleyes are being caught from shore or from boats where casting to shorelines is the best presentation. “Shore fishing runs through June,” he said. Best tactics are slip-bobbers and leeches, with evenings to dark best.

As of May 14, he said a few female walleyes are being caught with eggs, but water temps in the 46-plus degree range indicate the spawn is about over. His tip, “The Highway 19 bridges are the hot-spots right now.”

John Adams, owner of Big John’s Guide Service (701-381-2599), anticipates great things as the water temp quickly rises to his magic time of 60 degrees. With the forecast for 60’s and 70’s over the next week, he will be on Devils Lake searching for shallow walleyes. “There were some good catches from the smaller lakes in the chain, but the main lake was inconsistent over Mother’s Day weekend,” he said.

Early in the season his clients will be pitching jigs and Northern Impulse or Moxxies to the shorelines. A slow retrieve generates strikes. As water warms, he also casts #5 Flicker Shads and Shad Raps or Rapala Countdowns. “I keep moving along until locating walleyes. Sometimes, with a cold front or finicky fish, I stop and fish with leeches below slip-bobbers,” Adams said.

Professional angler and tournament winner Jason Feldner, owner of Perch-Eyes Guide Service (701-351-1294), has been checking spots. His guide business kicks into high gear immediately. “The fish cleaning stations are in; the docks are in; the water is about the same as last year. We’re ready for business,” he said.

Currently, mornings are mainly bobbers with leeches. As the water warms with afternoon sunshine, he speeds things up by swimming jigs and plastics. Moxxies are one of his favorites. Number 7 Countdown Rapalas in perch color are also popular during early spring. “Mud bottoms heat up quicker and get the leeches going,” he said. Starting each day in 4 to 6 feet of water with slips, Feldner moves shallower as the sun slides across the sky.

“I’m fishing live bait now, but waiting for the good casting action that is right around the corner,” said Cody Roswick, owner of Fin-Hunters Guide Service (701-840-5407). When the water reaches the mid-50 degree mark, he ties on one-quarter ounce Northland RZ jigs with Impulse paddle minnows or Mimic Minnows. The trick is to reel them steady 6 to 12 inches off bottom. Occasionally, he drops them to bottom, and then re-starts the retrieve.

With the clear, cold main-lake water, he knows the walleyes are skittish. But, the upper lakes, back bays and after the wind stirs and clouds the water, fishing improves. “Right now, the current areas are tops, with some of the deeper water by bridges holding walleyes” Roswick said. “Evenings are best.”

With the financial support from local, state and federal levels, Devils Lake installed three ADA-compliant fishing piers which will accommodate handicapped anglers. Located on Channel A, the 8 x 36 foot pier is eight miles west of town on Highway 2 to 75th Ave NE. Turn north for a mile. At 54th St. NE, turn east for two miles.

The two 8 x 40 ADA-compliant piers are at East Ditch Rec Area and Henegar Landing. To East Ditch, turn on Elks Dr. just east of Walmart for one-quarter mile. Take the first left towards the pump station and dike. A playground is also located here. The Henegar Landing pier is one mile west on Highway 19 to Walleye Dr. Take Walleye Dr. one mile to pier.

Z-MAN: Ultra-refined JackHammer™ StealthBlade
From Tournament Success to a Winner for all Walleye Anglers
Keep Small Tackle Organized with the New Plano(R) EDGE™ 3500
Huskey Makes History
Ice is Coming Along Nicely. Are you Ready? – Lake Of The Woods MN
American Sportfishing Association Elects Board of Directors for 2022