Matthew and Bruce Rogers With The Win on D’Arbonne 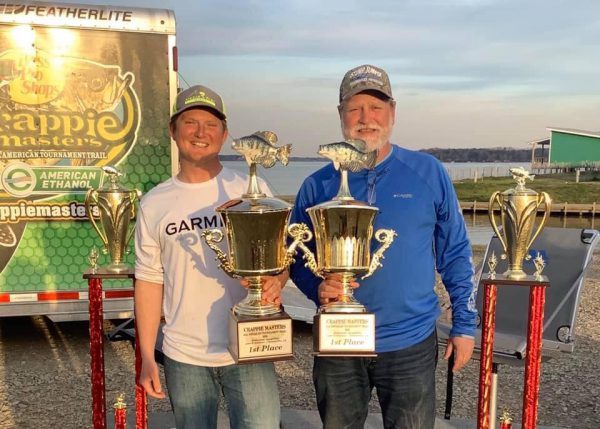 Post cold front conditions with morning temperatures in the 30’s along with a tough bite, and spooky fish set up to be a challenge for the 87 boats taking part in the Crappie Masters sponsored by the Renewable Fuels Association, “Ethanol Fueled With Pride”, American Ethanol, and Bass Pro Shops, Lake D’Arbonne National Qualifier, February 28 and 29 in Farmerville, Louisiana hosted by the Union Parish Tourist Commission, Union Parish Chamber of Commerce, and the City of Farmerville.

After a disappointing day one in their minds setting in sixth place with 13.89 pounds, the father/son team of Matthew and Bruce Rogers who have been on a two year tear, set their Crappie Masters Championship Saturday sights to overtake a more than formidable foe in the HH Rods and Reels team of Billy and Scott Williams fresh off the first $10,000.00 check at the St. John’s River who turned heads and awed the crowd topping the field with a day one 15.07 pound day one weight lining themselves up to collect back to back $10,000.00 checks but it wasn’t meant to be. Crappie Masters Championship Saturday brought calmer winds and warmer weather and that played exactly into a determined Rogers team who found a couple of angles on day one that eventually led to victory. First the team decided to move from one end of the lake to the other and even more important noticed that boat pressure and electronics noise was causing the bigger fish to spook and move into “ditches and channel lanes away from the pressure. That was the key to victory as Matthew and Bruce set up outside the other Anglers and intercepted the huge D’Arbonne fish by casting past the fish and bringing the bait back to the fish which was the same technique the top three teams used as did most of the field, however Matthew and Bruce found the bigger fish coming from sixth to Champions with an eye popping and possible Lake D’Arbonne seven fish record weight of 16.47 pounds bringing the Rogers fourteen fish weight to 30.36 pounds outdistancing the second place Father and daughter team of Terry and Terra Stewart who brought 29.64 pounds to the scale also using LiveScope to find and target larger fish with a pitch and retrieve jig technique putting the bait in front of the spooky and skittish fish. It was much the same for the third place team of Dustin Harris and Kelly Graham who brought a very respectable 29.07 pounds to the scale over the two days single poling and following the larger fish. The top three teams fished anywhere from two to four feet to 14 feet catching the big fish on the bottom with bellies in the D’Arbonne mud. Lake D’Arbonne showed well even in very tough fishing conditions with the average weight of fished weighed in an impressive 1.73 pounds.

Matthew and Bruce Rogers not only claimed the Crappie Masters National Qualifier Championship, they also took home two huge trophies from the Union Parish Tourist Commission and Union Parish Chamber of Commerce recognizing them as 2020 Louisiana State Champions. The Rogers also had a healthy day of winnings collecting a total of $11,800.00 beginning with a $10,000.00 first place prize. The team also took home the new Anglers Port Marine $1,000.00 customer bonus by fishing out of a Phoenix boat purchased from Anglers Port Marine in the last two years. Matthew and Bruce Rogers also collected the Missouri Corn Merchandising Council and American Ethanol $500.00 bonus for using E10 fuel in their boat, a $100.00 Jenko Fishing bonus, wrapped up by collecting the first $200.00 HH Rods and Reels bonus.

The Runner up team of Terry and Terra Stewart not only took home a $5,000.00 second place check, but also walked away with a Humminbird Helix 5 for being the top placing male/female team.

In fourth place was the father/son team from Missouri, TJ and Alex Palmer went back to the Show-Me State with not only a $2,300.00 check, but with a Minn Kota Trolling Motor and $100.00 Everharts Outdoors Store gift card for being the top place Adult/Youth team in the tournament.

Rounding out the top five was another seasoned team, Lamar Bunting and Greg London rolling out with $1,800.00.

Big Fish Honors went to the team of Dan Langston and James Pegram who stunned the crowd with a D’Arbonne Swamp Donkey weighing a huge 3.25 pounds, which brought them a $1,218.00 payday. Those of you that crappie fish will enjoy the fact that the team was proud they didn’t use a net and “boat flipped” the big fish in the boat.