Haidusek And McClure Win One Pole on Lake Fork Buoyed by a 3.11 pound Texas Toad on Championship Saturday, the Missouri team of Frank Haidusek and Mark McClure relied on one pole experience and electronics to claim the teams first Crappie Masters victory at the Crappie Masters sponsored by The Renewable Fuels Association “Ethanol Fueled With Pride”, American Ethanol, and Bass Pro Shops Lake Fork, Texas National Qualifier and One Pole Artificial Bait Ultimate Challenge April 5th and 6th hosted by Emory Tourism. Sitting in the fifth position after day one with the possibility of strong thunderstorms on Championship Saturday, stayed with their plan, dealt with the rain and topped a strong field backed by the teams 3.11 pound kicker fish to take their place in the Millennium Marine Hot Seats where they stayed as the 4 teams ahead of them faltered and were unable to overtake Haidusek and McClure’s 30.72 pounds on 14 fish over two days of fishing claiming the $7,000 first place check along with the big fish check of $1,148.00 plus a $500.00 E10 bonus from the Missouri Corn Growers Association and American Ethanol. Haidusek and McClure caught their fish scattered 13 to 20 feet deep fishing underwater structure on HH Rods and Ozark Rods using a Spike-It Junebug 2 inch jig and the new Midsouth Tackle tube in the MU color, a black and gold color scheme designed by McClure. With Saturday’s storm associated winds the team credited not only their Mercury powered Nitro boat and Minn Kota Trolling Motor said their Humminbird and Garmin combination kept them consistently on the bigger fish, which led to the win. Haidusek and McClure are sponsored by HH Rods and Reels, Foxy Fishing Gear, Ozark Rods, Spike It, Top Secret Jigs, Rod Sox, Midsouth Tackle, Crappieholic, Dairy Queen, Wyld Gear, and Dietz Family Restaurant. The runner up position was filled by the team of Shaun Church and Trey Phillips who brought 14 fish to the scale weighing 30.46 pounds, good for $3,500.00. Much like Haidusek and McClure, Church and Phillips caught their fish scattered in 12 to 20 feet of water on predominantly a purple and chartreuse jig, which they have confidence in when fishing stained water. They also credited their Minn Kota Trolling Motor and Livescope to find and keep the teams Mercury powered Nitro boat on the bigger tournament fish. 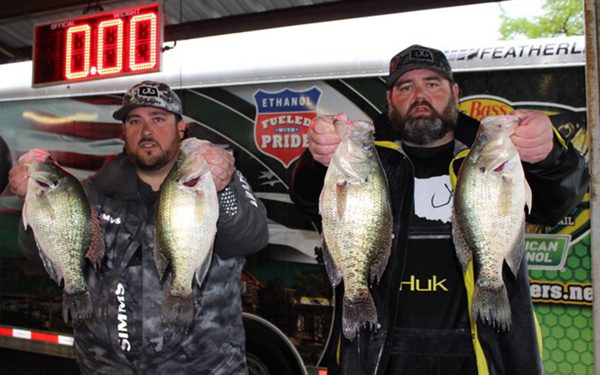 Third place went to the Oklahoma team of Bo Tisdell and Jerry Graham who also broke the 30-pound mark weighing in a two-day total weight of 30.17 pounds and walked away with $2,500.00. Tisdale and Graham also chose the Minn Kota Trolling Motor, Humminbird and Garmin combination to catch their fish on a bluegrass colored jig in 20 foot of water around 14 feet deep. Tisdale and Graham are sponsored by Okie Slab Seekers.

Claiming fourth place was the team of Dillon Hackler and Mike Krebbs who weighed in 29.87 pounds of fish good for a $2,200 check.

Rounding out the top five was the current Crappie Masters National Champion Matthew Rogers fishing with his father Bruce Rogers bringing 29.85 pounds of Crappie to the scale and walked away with a $1,900.00 check.

Second big fish of the tournament money went to the day one leaders who wowed the crowd with 3.01 pound Lake Fork dandy on day one that gave them $492.00 along with 4 Rod Sox for being first team out of the money, and also were the top Male/Female team of the tournament winning a Humminbird Helix 5 for that honor.