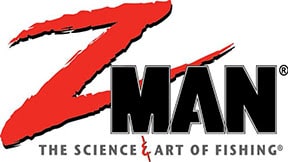 Ladson, SC (March 3, 2021) – This wasn’t Gussy’s first rodeo. But going in to the final day of prefishing for the 2021 Bassmaster Elite tournament on the Tennessee River, prospects of cashing any kind of paycheck felt pretty bleak. Following two brutally-tough practice days, however, everything would flip in his favor when the Z-Man pro discovered a spot that played right into his hands—and one of his favorite smallmouth tricks from back home.

On championship Sunday, Ontario, Canada’s Jeff Gustafson would weigh his twentieth smallmouth bass—more bronze than all other competitors combined—toward 63-pounds and a decisive 7-pound advantage over his next closest competitor. An impressive model of consistency throughout the four-day bass derby, Gustafson caught every smallmouth bass on a singular potent presentation—a 4-inch Z-Man Scented Jerk ShadZ (Bad Shad pattern) on a 3/8-ounce 90-degree jighead. Although he boated up to 30 smallmouth bass each day, Gustafson was only allowed to weigh specimens exceeding 18-inches in his 5-bass daily limit.

Employing a subtle, vertical jigging maneuver known as ‘moping’—or Damiki rigging— Gussy followed the descent of his jig and soft minnow bait on his 2D sonar screen, watching smallmouths track and ultimately wolf down the morsel, one to three feet above bottom.

“I’ve fished a ton of different minnow profile baits for this presentation, but a lot of us—including most of my friends back home—use the Z-Man ElaZtech stuff and specifically, the Jerk ShadZ,” asserted Gussy, who pocketed a $100,000 check. “The buoyant nature of ElaZtech baits allow them to perform perfectly in a lot of presentations like this. For this technique, the bait’s flotation is key because it hovers and presents itself in a totally natural, horizontal baitfish posture.”

Standing on stage, cradling the big blue Bassmaster trophy, the easygoing Gussy reflected on a career, well on its way to legendary status. “I’ve got a lot of friends back in Canada who are as good at fishing, maybe better, as I am,” he conceded. “But I’ve had some lucky breaks that have led to this, and let me live the dream.”

Modesty aside, Gustafson’s been one of the best smallmouth anglers in North America for several decades. Following several close calls on the Bassmaster Elite series, including a 2nd place finish at the 2019 Cayuga Lake event, Gustafson’s Tennessee River win marked his first Elite victory—only the second time a Canadian angler has won on the big stage.

It was, however, far from his first taste of tournament triumph. Beginning two decades ago, Gustafson sparked an incredible run of bass tourney triumphs, winning the ultra-competitive, 130-boat Kenora Bass International in 2000 and 2008. He also claimed first place at the 2005, 2010, 2011, 2017 and 2018 International Falls Bass Championship and won the Fort Francis Canadian Bass Championship in 2013 and 2014.

Z-Man president Daniel Nussbaum recalls his first day in the boat with Gustafson. “Had the good fortune to meet and fish with Gussy five years ago in Canada, and I knew that day he was someone who belonged on the Z-Man team,” says Nussbaum. “Yeah, he’s one of the nicest, most genuine dudes I’ve met, but he also completely ‘gets it’ in terms of recognizing and relying on the benefits of our ElaZtech material.”

Driving back home to celebrate with friends and family, flashing the friendly grin that’s endeared the Keewatin, Ontario angler to fans across the continent, Gussy reflected on his game-winning pattern. “Actually drove by my spot in prefishing a few times before fishing there. It was a canal area connecting Tellico and Fort Loudoun lakes—a 35 mile run from the weigh-in. My friend Clent Davis told me he’d had several bass come up in there and look at his swimbait. So, I motored through the canal and marked a lot of rock and cement chunks and quite a bit of bait and just felt there had to be some bass in there.

“One of my first drops, the Jerk ShadZ went whap! and I caught a 17-incher. Started hooking bass pretty regularly and would see other fish on the screen. Probably caught 20 to 30 smallmouths each day here, and some of them were the bigger ones.” Jeff “Gussy” Gustafson with the Z-Man Jerk ShadZ that helped him capture the 2021 Bassmaster Elite Series win at the Tennessee River—and the battle scars to prove it. (Photo courtesy of B.A.S.S. / Andy Crawford)

Describing the technique he’s used successfully many times before, Gustafson paid tribute to his friend and mentor, the late Ron Lindner. “Ron came up with the term moping, after his sons James and Bill won the Canadian Bass Championships with this technique, hanging a fluke-style bait on a jighead, vertical cat-and-mouse fishing for bass around deep structure. It’s become a popular technique down here on the Tennessee River, but on Lake of the Woods and Rainy in Canada, it’s been a predominant smallmouth technique from midsummer through fall.

“I’ve been dying to put this pattern together on one of these Tennessee River fisheries since 2012,” he admitted. “I actually didn’t expect to do it here. Had a miserable practice. Caught like three keeper largemouths the first two days, but found that spot on the afternoon of the third day of practice, and it was game-on.”

Gustafson noted that properly presenting his jig and ElaZtech bait wasn’t a mere matter of dropping it to the bottom. “You couldn’t just spot-lock over the fish. If you did this, the current would sweep the jig way under the boat before it hit 18 to 20 feet. With cold, fast-moving 45-degree water, you had to stay one-hundred percent vertical and in constant contact with the bait. I was doing controlled drifts of .8 to .9 mph, keeping the bait directly below the transducer beam. “You’d lift the Jerk ShadZ up over the rock and drop it back into the holes. The smallmouths were lying right on the backsides of these current breaks. Sometimes, the fish would come right up and smoke it. Other times, I’d have to shake, lift or give the bait a little twitch. Honestly, all the time I’ve spent ice fishing, watching fish react to baits on a flasher, paid off.”

“The Jerk ShadZ’ buoyant nature elevates the tail up so it hangs naturally horizontal. That’s huge. With most other plastics, you hang it down there and the tail sags and sits more vertical, which doesn’t look right to the bass. The ElaZtech material also helped slightly float the bait above snags and stay in the bass’ line of sight.

“You should see my thumb right now,” he laughed. “Absolutely torn up and raw with bass battle scars. Wouldn’t have it any other way.”

“It’s pretty amazing,” continues Nussbaum. “We were just talking a few weeks back how we believed Gussy would win one this year. To see him win the very next tournament with all smallmouth while fishing his way is one of the coolest things I’ve seen in bass fishing. We couldn’t be more thrilled for Gussy and for Z-Man to be part of his success.”