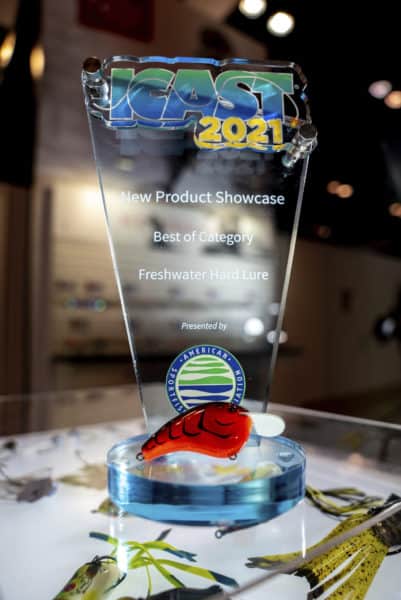 LEXINGTON, S.C.–July 22, 2021–Teamwork pays off as Strike King and Strike King Pro Andy Morgan teamed up to win a best in category award in the freshwater hard baits division, with the Chick Magnet. Strike King’s innovative design team worked with Morgan to develop the flat-sided crankbait. Andy whose home is in Dayton, Tennessee, harkened back to his upbringing on or around Lake Chickamaugato develop the Chick Magnet.” It is great to finally see the flat-sided crankbait getting the attention it deserves,” said Morgan.

Strike King Director of Product Development Crispin Powley says “While the flat-sided crankbait has a rich history in Tennessee and the Carolinas-where Andy cut his teeth-it has proven to be highly effective style of bait nationwide.”Those early lures I remember so fondly were designed by garage craftsmen out of balsa and cedar, and they had action like no other,” said Morgan.“That’s what our team at Strike King had in mind when we envisioned the Chick Magnet, and I think we were true to those early designs.”The thin body design of the Chick Magnet and the circuit board lip impart a tighter wiggle and an exceptionally lifelike action to the lure.”The Chick Magnet has the perfect action, that wobble, and thump, that makes it really get bit,” Morgan added.

The Chick Magnet is ideal in the three-to-six-foot depth range and anglers will certainly see the design’s benefit for targeting fish in tougher conditions; the Chick Magnet excels in cool water, when fishing pressure is high, or after a weather front has made finding a bite more challenging.

“We worked really hard to breathe new life and bring new technology to an old, tried-and-true design,” Morgan offered.”One of the challenges of traditional balsa flat-sided crankbaits is their castability and durability. Historically flat-sides are hard to cast for distance or accuracy due to their lighter weight and could only handle so much abuse before it was destroyed. But we addressed these issues when designing the Chick Magnet. It will cast, hold up well, and more importantly, catch big ones!”

Strike King offers the Chick Magnet in 13colors. For clear water, Morgan prefers the Green Gizzard Shad, Natural Shad, Natural Bream, and Sexy Shad 2.0. When fishing stained water, Morgan often switches to a Chartreuse with Blue/Black Splatterback or a Chartreuse Copper. His personal favorite color in the line is “Tip’s Special” which pays homage to Marion Tipton, the original carver of the bait that was the inspiration of the all-new Chick Magnet.

Rather Outdoors is a global outdoors corporation uniting some of the most recognizable brands in the fishing space. With historic and iconic brands such as Lew’s, Strike King, Quantum, Zebco, Fox, Matrix, Salmo, and Fox Rage, Rather Outdoors provides a wide assortment of fishing products worldwide in an effort to enhance angler’s success and the enjoyment of outdoor pursuits. To learn more about the Rather Outdoors brands, visit www.ratheroutdoors.com.