Z-MAN: Breaking Down the Bass Jig Breaking Down the Bass Jig

Ladson, SC (March 27, 2020) – “Sure glad I don’t have to pour my own homemade bass jigs or tie my own skirts anymore,” laughs David Walker, jig fishing maestro and MLF Bass Pro Tour angler.

Now fishing another full season on the Bass Pro Shops / Major League Fishing Tour, Walker says he’s never been more confident that each flip, pitch and skip of his freshly-minted CrossEyeZ Jigs will result in a hookset. “You’d be amazed how often many of the standard flipping jigs snag up in wood,” observes Walker, who credits a skirted jig for the majority of his $1.9-million tournament winnings. “What a waste to flip into a juicy-looking spot when your jig gets stuck all the time. Thankfully, I don’t worry about that anymore. I know these jigs are going to get in there and come back clean or with a fish attached, every time. That’s a big deal when you’re picking apart long stretches of cover, one cast at a time.”

Between tournament prefishing days, the Tennessee based angler recently sat to evaluate the fine-points of jig design and all the little perks of doing things a certain way . . . the Walker way.

“I fish a series of four different jig styles—a flippin jig, swim jig, football jig and power finesse jig— depending on the season, lake scenario and factors like water clarity and cover,” says Walker. “Of those, the flippin’ jig is the workhorse. It’s rigged on my deck almost all year long. A month ago, I was using the CrossEyeZ Flippin Jig to skip under docks and laydowns on Lake Eufaula. A few weeks later, I was on Okeechobee, flipping eelgrass. Here at (Lake) Fork, I’ll be flipping along the edges of boating lanes in timber and grass. I couldn’t cover all that water, one flip at a time, if I didn’t have an efficient jig design—and that starts with the jighead itself.” When Walker first sat with the Z-Man team to dissect jig design, he related precise ideas about the shape of the lead head. “To me, you want a jighead that’s wider than it is tall,” he asserts. “Unfortunately, a lot of jigs have been built with a rounded or dart shape that makes them pivot and turn the hook into the cover, so hang up and have now wasted the opportunity.”

It’s one reason Walker says the CrossEyeZ Flipping Jig represents a major departure in traditional jig design. “We constructed our jig with a wide, flattened head and a smooth, plane-like surface on the bottom. The flat bottom makes it skip across the surface without digging in—ideal for pitching under docks or laydowns. This shape—opposite that of a rounded profile—prevents the jig from rolling over. The jig stays in an upright position with the hook perfectly aligned as it planes through the water.

“When I set the hook, this jig’s flattened head won’t pivot in the fish’s jaw. Rather, the head positions the hook to penetrate the roof of the mouth or upper lip—a location that makes it nearly impossible for a bass to shake loose. The wide, planed surface of the CrossEyeZ head also allows the jig to slide through and over branches and brush without rotating the hook into a snag.” 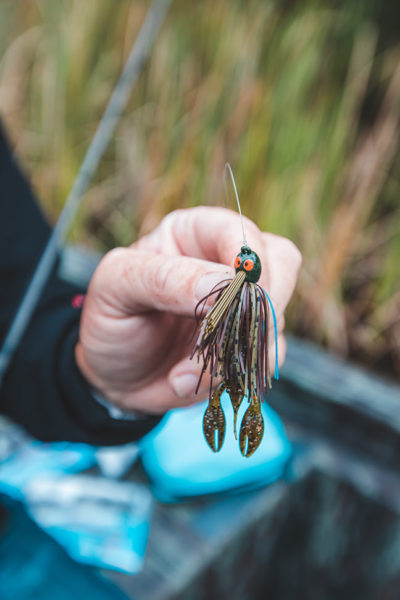 The CrossEyeZ Power Finesse Jig shines in clear water and other subtle situations.

Working in concert with the flattened jig shape, Walker is adamant about the orientation of the eyelet, or line tie. “Aligning the eyelet flat or horizontally relative to the jig’s flattened profile keeps it in an upright position during the retrieve, without rolling off to one side or the other. If you pull it up to a limb, give slack and quickly pull back, the jig won’t turn one way or the other. Instead, you get a nice clean presentation through the cover.

“By positioning the eye toward the top, front end of the jighead, you’re helping facilitate the nearly-vertical pull of the lure, while holding your rodtip high. The flat-oriented line-tie also works with the jighead, rather than against it, to further stabilize the jig and keep it from getting pinched between branches.”

For working through vegetation, as opposed to wood, Walker prefers a vertically-oriented line-tie and slightly different jig style. “In part because we fish vast forests of grass more horizontally, I designed the CrossEyeZ Snakehead Swim Jig with a vertical line tie positioned right at the tip of the nose. This gives the presentation an almost snake-like quality—and a talent for slithering its way right through the grass.” For the perfect blend of snag-resistance and hook-setting success, Walker delineated brushguard details such as fiber flexibility and the precise number of bristles. “Most jig manufacturers don’t pre-trim their fiber-guards, opting to let the individual angler decide where and how much to trim. The problem is that most anglers are afraid to trim because they don’t want to screw it up and leave themselves with a non-performing lure. And a lot of the non-trimmed guards are too flexible, because they’re simply too long. (To comprehend the concept, Walker suggests comparing a 10-foot versus a 5-foot wooden two-by-four.)

“To me, I’d rather have a jig that worked perfectly right out of the package. So, we pre-trimmed the Z-Man brushguards to give the optimal flex without folding past the hook barb. That’s about the ideal movement you want out of a fiber-guard—enough flex to hook every bass and ample protection to slide the hook cleanly through the cover.

“We actually played around with a bunch of different strand materials with different densities and stiffness. In the end we used the same number of bristles on both the swim jig and the flipping jig, but used softer bristles on the swim jig based on the nature of the cover itself—vegetation versus rigid wood. 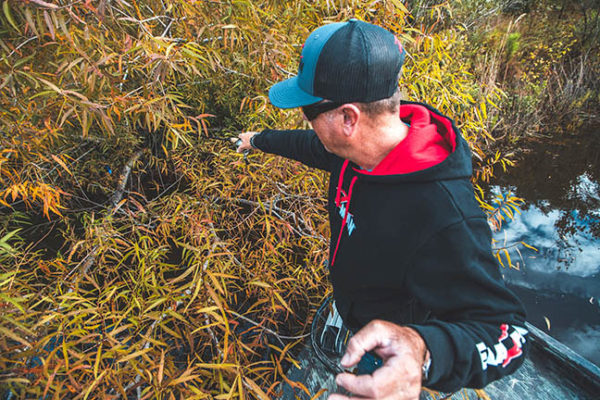 “Still amazes me how many jigs use skirts with those little rubber bands,” Walker admits. “Sooner or later, the band breaks and the skirt falls apart. You open your box and find your favorite jig laying there in a bed of loose skirts. I hate that. It’s why I carried a little fly-tying kit in my boat for years: to hand-tie my silicone skirts with copper wire.

“To my knowledge, CrossEyeZ jigs are the only ones with hand-tied, copper-wire-wrapped silicone skirts. Z-Man fought me on this because it’s takes longer to produce. But what a difference it makes. The skirts themselves are 100-percent silicone with no fillers or additives. They’re probably going to last as long as the jig itself.

“What’s also great about these durable skirts is I can actually slap the lure on the water and shed grass or algae without losing a single strand. Try that with a rubber band, some time.”

The penultimate part of any jig, hook selection for Walker also carries intelligent thinking. “A lot of bass jigs have 5/0 or larger hooks. After flipping all the various jigs for 20 years, there’s no doubt in my mind the large gap of a 5/0 leaves you vulnerable to snags even when you’re fighting a bass, which leads to lost fish. Instead, the heavy duty 4/0 VMC flipping hook we chose is big enough to hook bass really well. It’s also compact enough to move cleanly through the cover.”

Further, Walker insisted on positioning the wire trailer keeper on the inner shank of the hook for good reason. “The inner keeper faces the fat side of most jig trailers, like the Turbo CrawZ™—which face up on a jig, pinning them in snugly place. But when I’m rigging a trailer like the ElaZtech®BatWingZ™, which is tough enough to simply hook once through the body—like a piece of old-school pork rind— I’m not even using the keeper. But because it faces in and isn’t left exposed, it won’t snag or get hung on stuff.”

“Two years ago, I sat with my friends at Z-Man to discuss ideas for a new, radical series of bass jigs,” Walker recalls. “Right out of the chute, I told them I wasn’t interested in doing a cookie-cutter; we’d need to re-evaluate and re-engineer every specific jig detail. Too many issues with so many bass jigs that have gone unfixed forever. Thankfully, the Z-crew just gets it, and patiently let me be as persnickety and precise as the project warranted. Ultimately, everyone who fishes these jigs wins.”