SANDUSKY, Ohio (June 30, 2020) – The 2020 Toyota Series will open the Northern Division with a tournament next week at Lake Erie, July 9-11, with the Toyota Series at Lake Erie. Hosted by the City of Sandusky, the three-day tournament will feature the region’s best bass-fishing pros and co-anglers casting for a top prize of up to $65,000, plus a $35,000 bonus if the winner is a qualified Phoenix Boat owner. 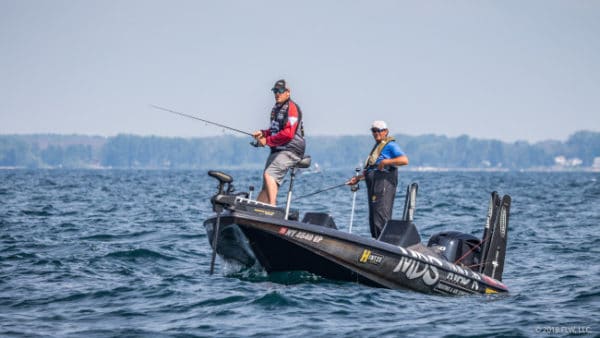 The event will be the third Toyota Series tournament held since the organization paused all competition in mid-March due to the coronavirus pandemic. Originally scheduled to be held at the St. Lawrence River in Massena, New York, the event was moved to Lake Erie at Sandusky after New York’s recently announced travel restrictions last week.

“Because of the timing of the event and with Canada being off-limits, it’s going to be a little tougher tournament for the smallmouth bass,” said boater Mike Trombly of Belleville, Michigan, who has eight career FLW wins. “Typically, what ends up happening, is those fish come to the islands to spawn, and then those fish scatter off into Canada. With it being postspawn, I think it’s going to be tougher for the smallmouths.

“They’re pretty much just done. You may have some bucks still on beds, but you’re probably going to catch fish deeper,” said Trombly. “They’re going to start finding them on the deeper structure, probably 16-feet plus, and you could catch them as deep as 25 or 30 feet. How well they get caught depends on how far into summer they are. If they’ve had a chance to gang up guys should catch them.”

While the smallmouths are likely to be in a transition stage, Trombly thinks the largemouths, which spawned earlier in warmer bays and backwaters, will be ready to rock. In the shallows, frogs, other topwaters and flipping baits will work. For offshore fish, a crankbait or a heavy jig could get the call.

For smallmouths, the usual range of Great Lakes techniques should play. For shallow fish, a jerkbait, swimbait and spy bait will be good tools. For deeper fish, the tried and true standards apply.

“It’s pretty much the same old, same old for the smallmouths,” said Trombly. “Ned rigs – anything that is minnow-replicating – goby baits, that all is good. Gobies are probably the predominant forage species for smallmouth, on that particular part of the lake.

“I think a mixed bag could definitely do it, and I would not be surprised if a largemouth-only angler won it,” Trombly went on to say. “I think if someone can average 20 pounds a day, they will have a really good chance of winning.”

Anglers will take off daily at 6 a.m. EDT from the Shelby Street Boat Launch Facility, located at 101 Shelby St., in Sandusky. Weigh-ins will also be held at the Shelby Street Launch Facility and will begin at 2 p.m. To minimize the spread of COVID-19, attendance is limited to competing anglers and essential staff only. Fans are encouraged to forgo the daily takeoffs and weigh-ins and follow the event online through the “FLW Live” weigh-in broadcasts and daily coverage at FLWFishing.com.