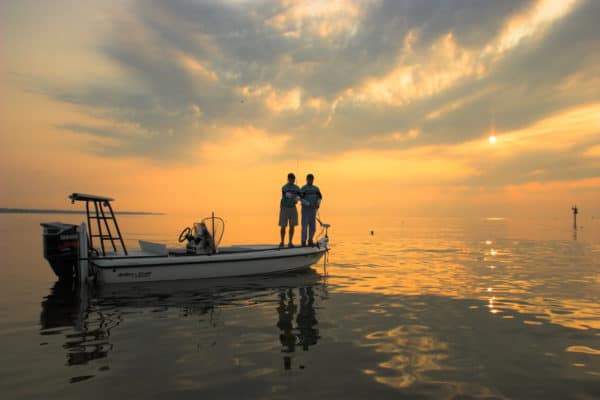 Teams competing in the 2021 Yamaha Bassmaster Redfish Cup Championship presented by Skeeter will only be allowed to weigh two fish in the 20- to 28-inch slot per day. BIRMINGHAM, Ala. — For the six Bassmaster pros competing as part of an all-star team in the Yamaha Bassmaster Redfish Cup Championship presented by Skeeter, the event’s format will make finding the right bites critical for claiming the $50,000 first prize. The 10 teams competing Nov. 12-14 on Texas’ Port Aransas will only be allowed to weigh two fish in the 20- to 28-inch slot per day rather than the standard five-fish limit for B.A.S.S. events.

Bassmaster Elite Series angler Derek Hudnall, who will be part of a team with veteran redfish angler Ron Hueston, believes his Elite experience will serve him well: “A lot of us on the bass side really pay attention to execution. In a tournament like this, you’re looking for two of the right bites. Those (high slot) redfish are the ones you have to have, so execution is absolutely key because those types of bites don’t come around often.”

“A lot of guys will fish these events and think that catching two fish a day is going to do it,” he said. “Or, you get in an area where you’re fishing a school of fish and it takes you 50 fish to catch the right two. What you need to do is find an area where the fish are feeding differently — larger forage — and you’re looking to catch half a dozen to find the right two.”

Tournament waters for the 2021 Redfish Cup Championship include Aransas Bay and Corpus Christi Bay, stretching from the Gulf side of the Port O’Connor Jetties north to Port O’Connor Point and South Bird Island Basin — marker 80 (red) and 70 (green).

While picking through smaller schooling fish to find a pair of high-slot reds can become an exercise in futility, Hueston believes his odds are usually better by going to the other end of the size scale. That means taking advantage of those fall aggregations.

“Also, this is going to be a three-day tournament, so you’re going to try to look for consistency on the right size fish for three days. If a team is fishing smaller fish and then oversized fish, there’s no consistency on taking a chance with those bigger fish.”

With high-slot fish generally running in the 7- to 7 1/2-pound range, the winning team will likely need 14 to 15 pounds a day.

Ten teams will compete in this year’s Redfish Cup Championship, including the teams of Travis Land and Nicky Savoie and Glenn Vann and Thomas Barlow from the Elite Redfish Tournament Trail as well as Jeremy Heimes and Mickey Gibbs and Chris Cenci and Chris Kennedy from the Power-Pole Pro Redfish Tour. Hudnall and Hueston will be joined by five additional all-star teams featuring Bassmaster pro anglers paired with redfish pros: Matt Herren and Chad Manning; Mark Menendez and Ricky Bort; Patrick Walters and Dwayne Eschete; Chris Zaldain and Ryan Rickard; and Trait Zaldain and Matt McCabe.

Competition hours are 6:45 a.m. CT with daily weigh-ins set for 3 p.m. at Fisherman’s Wharf in Port Aransas. Fans can catch Bassmaster Redfish LIVE coverage all three days of the tournament as cameras capture all of the action beginning at 7 a.m. each day on Bassmaster.com. FS1 will broadcast live Nov. 13-14 from 7-10 a.m. with livestreaming available on Bassmaster.com and the FOX Sports digital platforms.

The 2021 Bassmaster Redfish Cup Championship is being hosted by the Port Aransas Tourism Bureau & Chamber of Commerce.