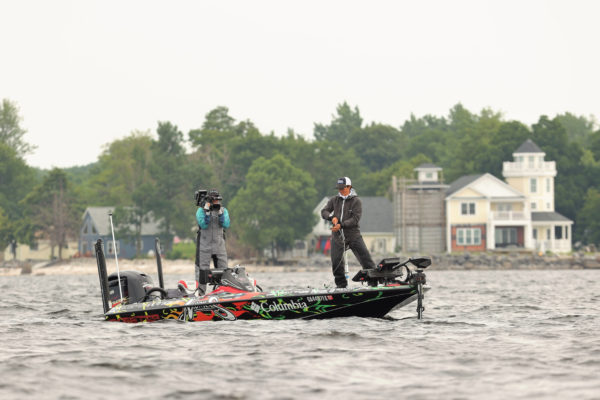 Taku Ito, who took home his first victory in 2021 on the St. Lawrence, will be among the field when Clayton, N.Y., hosts the Guaranteed Rate Bassmaster Elite at St. Lawrence River July 14-17.

CLAYTON, N.Y. — While locals classify St. Lawrence Seaway vessels as salties (ocean-going ships) and lakers (those used solely for inland transit), a similar notation will divide the field of 90 anglers set to compete in the Guaranteed Rate Bassmaster Elite at St. Lawrence River.

Competition days will be July 14-17 with daily takeoffs from the Antique Boat Museum at 7 a.m. ET and weigh-ins each day back at the museum at 3 p.m.

“When we went out of Clayton in 2020, the Canadian side was closed (due to global pandemic restrictions),” said Wendlandt, who finished third in last year’s St. Lawrence event. “This year, the Canadian side is open — and with Lake Ontario, it’s massive. I think the sky’s the limit.”

Traditionally, Lake Ontario has produced the greatest number of quality fish. The river definitely holds big smallmouth as well, but the majority of the 5- and 6-pounders come from the lake.

With Lake Ontario’s vastness necking down into the St. Lawrence, the suddenly constricted water creates stronger current. Fish expend more energy in swift water, as opposed to the stationary lake lifestyle, which allows for more weight retention. Also, river anglers are forced to fish the shoals, rocks and ledges with long drifts, while the lake favors a more target-oriented strategy.

Time and fuel consumption won’t allow anglers to visit Lake Ontario’s entirety, but the northeastern region that sits within realistic tournament range offers a generous array of options. From Cape Vincent and Chaumont Bay near the U.S. side of the river mouth, to offshore islands, to open-water bottom structure, Lake Ontario smallmouth love their rocks.

A variety of shiners and minnow-type baitfish inhabit Lake Ontario and St. Lawrence River structure, but the round goby — an invasive species that reached the Great Lakes region through the bilge water expulsions of international ships — dominates the food web. Lacking a swim bladder, these smallmouth snack bars are mostly bottom huggers, so it’s no surprise that drop shots, Ned rigs and Carolina rigs do most of the work.

Jerkbaits, crankbaits, spinnerbaits, swimbaits and marabou jigs also tempt smallmouth. This offers plenty of options for anglers, but, as Wendlandt points out, the brown fish are not the only game in town.

“There’s a variety of ways to fish there and, in 2020, largemouth earned third place,” Wendlandt said of Brock Mosley’s atypical game plan that year. “If you fish for largemouth, you’re going to have the whole fishery to yourself.”

Mosley spent most of his time working seawalls and shoreline structure in the Clayton area. He caught his fish on a bladed jig, but squarebills, spinnerbaits, swimbaits and Texas rigs will also interest largemouth.

Those who fish the lake use their electronics to target specific structure. A lot of this is at least partially vertical in nature, but forward-facing sonar enables anglers to closely inspect a structure and target specific fish.

This year’s weather outlook calls for southwest winds of less than 10 mph, but much can change. To this point, Wendlandt said anglers taking on the big lake must remain vigilant.

“You have to be smart; the wind can mess you up,” he said. “Our boats can handle it; you just have to take your time.

“You can’t fish as effectively. You can’t use your trolling motor (as well) when it’s windy, so you have to be willing to drift when it’s really bad.”

Going into the tournament, Brandon Palaniuk of Rathdrum, Idaho, leads the Progressive Insurance Bassmaster Angler of the Year standings with 536 points. John Cox of DeBary, Fla., sits in second place with 518.

In the Falcon Rods Bassmaster Rookie of the Year race, Joseph Webster of Hamilton, Ala., holds the top spot with 373 points. He leads Jacob Foutz of Charleston, Tenn., by just 3 points.

Wendlandt predicts it will take a little under 20 pounds a day to reach Championship Sunday’s Top 10 field. An Elite angler has yet to enter the Century Club (recognizing a four-day total of 100 pounds or more) with all smallmouth, but Wendlandt predicts the brown fish will comprise a 102-pound winning total.

“We’ve gotten pretty close before, so I’m going to make it a goal,” Wendlandt said. “I think this will be a good event.

“It’s just a good place to fish and it has big fish. Whether it be smallmouth or largemouth, I think there’ll be an odd pattern that gets into the Top 10.”

Full coverage from all four days of the Bassmaster Elite at St. Lawrence River will be available on Bassmaster.com and the FOX Sports digital platforms. FS1 will also broadcast live with the tournament leaders on Saturday and Sunday, July 16-17 beginning at 8 a.m. ET.

The Guaranteed Rate Bassmaster Elite at St. Lawrence River is being hosted by the 1000 Islands Clayton Chamber of Commerce.