Even with day-one leader Eric Jackson taking a massive lead into the final day of competition and 70 more of the best kayak anglers on the planet behind him, Henderson did what he said he was going to do. He won the Dee Zee FLW/KBF Cup presented by YakAttack and the $15,000 top prize.

“I’ve never been set up this good for a tournament,” he said after his day-one performance of 81.25 inches, which landed him in third place. “I’ve never found something like this before. It’s special. No doubt it’ll hold up.”

And hold up it did. Henderson says he was confident his special stretch of Lake Ouachita would produce for him if he had it to himself on Saturday. For the most part, he definitely did.

Henderson almost didn’t fish the event – he says he’s “in the negative on PTO balance” at work – and Navionics study on his phone was about as much early scouting as he could do.

“We found the spot on the map that had the stuff we like to fish back home, contour- and cover-wise,” he says. “We got on the water there, and I got to looking at my map. I saw this spot that, when I first pulled up on it, that MEGA Imaging just lit up. I was telling myself there was no way that was all bass.”

He was wrong. Henderson had found a massive school of bass that hung around the same area all week. After catching some in practice, he decided to leave the school undisturbed, mostly to make sure no one saw him cracking a bunch of potentially winning fish in that area.

“I caught three good fish in practice easy, quick. I was like, ‘We need to go. We need to get out of here. It’s special here.’”

What the Rome, Ga., pro found was a section of the lake with a main-channel ledge in 12 to 18 feet of water. For whatever reason, that particular ledge was a favorite summering spot for some big Ouachita largemouths. The trick was getting them to bite.

“I caught them all dragging a junebug creature bait,” he explains. “I had some fish on other lures on day one, but today was different. I was just dragging that thing, dragging it slow. You could feel that thing coming through the school of fish, popping the line.”

Cloud cover was Henderson’s biggest foe both days, contrary to what the leaderboard might have suggested. Without the typical sunny, hot, humid conditions of Arkansas in midsummer, Henderson’s school was more scattered and harder to catch.

“They stayed 12 to 18 feet the entire time,” he adds. “They moved around some depending on the weather. They pulled up real tight to a bank shallower the first day.”

On day two, those same fish were scattered throughout the area, so it took a more finessey approach – the aforementioned creature bait on a Texas rig with a 3/4-ounce weight – to get the job done.

Confidence in his spot and in his own fishing ability is what really did the trick, though. Henderson came within a quarter inch of winning the 2016 KBF National Championship. That honor instead went to Matt Ball, who finished ninth in this event.

“This does not seem real,” he admits. “I’ve been chasing this dream since that first national championship I was close to winning. Matt’s a great, great guy. I couldn’t have lost to a better guy.”

But as he said on the weigh-in stage at Bank OZK arena in front of a packed crowd as he was crowned the inaugural FLW/KBF Cup champion, Henderson got this one. Arkansas pro Dwain Batey jumped from 17th to second with his huge day-two performance on Ouachita, tallying 84.25 inches, which led all angler totals on the final day.

It was Batey’s first fish – his kicker fish – that was the key component to his limit.

“I caught a 20.25-inch bass in about 6 inches of water fairly quickly, but it took me all day to grind out my five,” Batey says. I caught a couple short fish, but I had five keeper bites today.”

Getting just five keeper bites isn’t so bad when they’re the right keeper bites. And a little persistence certainly helps as well.

“The only subsurface fish I caught was the big one, with a fluke,” he explains. “He hit the topwater twice, and it looked like a little one. I thought it was a little fish.”

Batey followed up those topwater misses with the fluke and set the hook on the fish that would anchor his massive limit of Ouachita largemouths and propel him to a second-place finish. Like Batey, Garrett Morgan had a special fish on day two, and he caught it in a special place.

“It was funny. At about 9 o’clock today I looked at the buddy I was fishing with and said, ‘I’m going to try my 17-inch tree over there,’” he explains. “I caught a 17-incher over there in practice. I rolled over there and got the worm rod out and hadn’t really thrown it much with the clouds the way they were. I pitched it in there, and I caught an 18-incher and it took me about six minutes to get this thing out from the tree because it had wrapped itself all around every limb in there.”

Morgan hadn’t employed a worm much on day one because he felt the changing conditions from practice to the tournament – abundant sunshine to blankets of clouds – stifled the finesse bite. Instead, he opted for a swimbait and umbrella rig, which he rolled over submerged standing timber in about 40 feet of water.

But that cast with a worm on his “17-inch tree” was probably the one he’ll remember most. It produced a big fish that contributed to a big bag that earned him third place in perhaps the biggest tournament of his life. 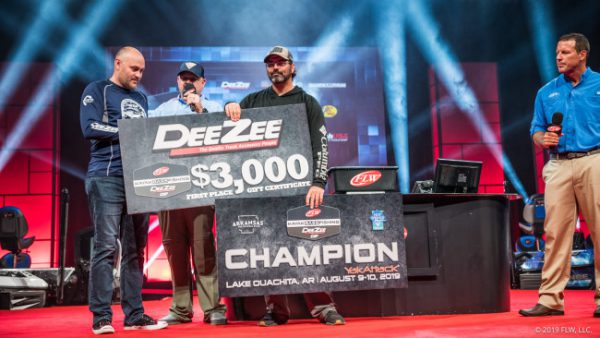