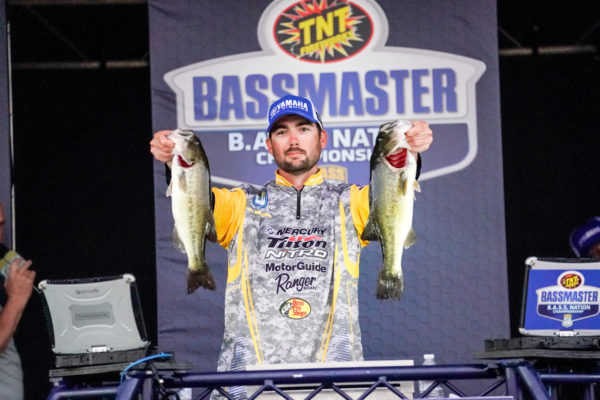 Wil Dieffenbauch of Morgantown, W.Va.., is leading after Day 1 of the 2022 TNT Fireworks B.A.S.S. Nation Championship on Pickwick Lake with 15 pounds, 4 ounces.
Photo by Chase Sansom/B.A.S.S.

FLORENCE, Ala. — Wil Dieffenbauch was the second-to-last boater to weigh in on Day 1 of the TNT Fireworks B.A.S.S. Nation Championship, but he’s first on the leaderboard.

Dieffenbauch, 33, of Morgantown, W.Va., caught a five-bass limit weighing 15 pounds, 4 ounces to seize the early lead in this three-day event in northeast Alabama.

Not that Dieffenbauch’s day started with a bang. He went to what he thought was his best spot as soon as he took off Wednesday morning, but with his late draw, two boats were already positioned there. Dieffenbauch tooled around the same general area for two hours with little production before deciding to scrap the spot and look for something better.

It was a wise move.

“I stayed shallow in a 3-mile section of water,” he said. “There was a good amount of wind blowing today which helped me and there’s bait everywhere, at least where I am.”

Dieffenbauch said he caught his best bass on a lure he makes. That was the only detail he was sharing for the time being, though.

“I’ve been making it for a long time, and it’s taken me a long time to perfect it,” he said.

While many of the 100-plus competing anglers struggled mightily on Pickwick, Dieffenbauch said a 2-foot drop in water overnight didn’t affect his bite. The U.S. Army Corps of Engineers is pulling water on Pickwick currently to get the 47,500-acre impoundment down to winter pool.

“I didn’t even notice a difference, really,” Dieffenbauch said. “I actually saw more shad popping today than I did in practice.”

Will Davis Jr. of Sylacauga, Ala., held the lead for most of the afternoon but dropped to second after Dieffenbauch charged from behind in the waning minutes of the weigh-in. Davis, 30, weighed a 13-13 limit with his two biggest bass coming later in the afternoon on a Davis Bait Company Shaky Fish — a lure his family makes.

“It was just a lot of different things today,” Davis continued, noting that two earlier keepers came on a spinnerbait and another on a swim jig. “You have to keep the faith and keep on grinding. Today’s a day when you could easily spin out (mentally).”

Kris Bosley of Amarillo, Texas, certainly is within striking distance, ending Day 1 in third place among boaters with a 13-4 limit.

“I had five keepers today on five keeper bites using five different baits,” Bosley said. “It was typical fall fishing. You just have to fish what’s in front of you; cover water. I’ve got two large areas and I’m just picking everything I can apart. There’s not a lot of cover, but I’m fishing riprap, grass, a channel ledge … being around bait is the whole key.”

Tim Talento of Meriden, Conn., is in fourth place after catching a limit that weighed 12-15. He used a myriad of baits but said his catches came “running across fish” rather than a particular pattern. He’s targeting largemouth, saying his smallmouth bite was too sporadic in practice.

“It’s a real grind out there,” Talento said. “I must have made 10,000 casts and I covered a lot of water. I have a couple of small spots that have been producing, and I lost a couple key fish today that would have really helped me out.”

Doug Thompson, of Mabelvale, Ark., caught a 4-15 to grab the early lead for the Big Bass Award and the $1,000 cash prize that goes with it.

The Top 3 anglers in the tournament will qualify for the 2023 Academy Sports + Outdoors Bassmaster Classic scheduled for March 24-26 on the Tennessee River in Knoxville, Tenn. The overall winner on Pickwick also will earn an invitation to fish the Bassmaster Elite Series for 2023 and the use of a fully-rigged Nation’s Best boat for the year.

David Porter, of Rockwall, Texas, caught two bass and leads all nonboaters with a 6-5 total. Pheerayout See of Rochester, Minn., is second with 6-3 and JJ Dickens of Beaver, W.Va., is third with 5-12.

Porter is in the lead for the $500 Big Bass among nonboaters with a 4-6.The Top 12 anglers in both divisions will claim cash prizes, with $20,000 cash going to the top boater and $10,000 to the leading nonboater.The full field will compete again Thursday, with the nonboater champion being crowned after the Day 2 weigh-in. The Top 10 boaters will advance to Day 3, as will the two leading boaters from each of the five B.A.S.S. Nation regions (if not already in the Top 10), the nonboater champion and any nonboaters that have enough weight to be among the Top 10 boaters overall.Day 2 competition will begin Thursday at McFarland Park at 6 a.m. CT. Weigh-in is scheduled for 2 p.m. Follow all the action on Bassmaster.com.

The 2022 TNT Fireworks B.A.S.S. Nation Championship is being hosted by Florence-Lauderdale Tourism.