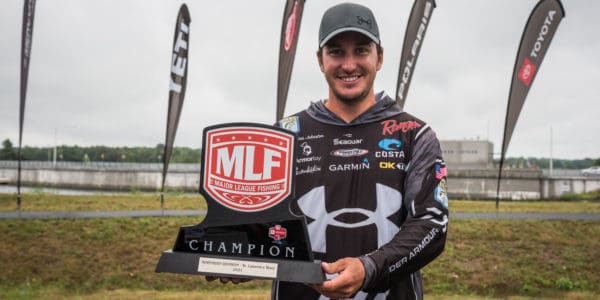 MASSENA, N.Y. (Aug. 29, 2021) – Toyota Series angler Chris Johnston of Peterborough, Ontario brought a five-bass limit to the scale Saturday weighing 27 pounds, 6 ounces to win the three-day Toyota Series Presented by A.R.E. at the St. Lawrence River in Massena, New York. Johnston’s three-day total of 15 bass weighing 77-15 earned him the win by a 6-pound, 5-ounce margin over his brother Cory Johnston of Cavan, Ontario, who finished the event in second place with 71 pounds, 10 ounces. Chris took home the top payout of $39,048 in the second tournament of the 2021 Toyota Series Northern Division.

Though he’s a former FLW Tour and B.A.S.S. Elite Series champion, Chris said he’s been foiled by Toyota Series events on the St. Lawrence and the associated waters too many times over the last several years. After running hundreds of miles over the three-day event, from Massena to Lake Ontario each day, he said he was excited to finally get the win.

“I was thinking about it while running back up the river, thinking ‘If I get back, I’ve finally got this off my back,’” said Chris. “I’ve obviously won tournaments, but the St. Lawrence River is special to me. To win this one means a lot because something has always gone wrong. I jumped off a 6-pounder on Day 3 before I had a good one in the boat, and my co-angler boated three good ones.

“Then I ended up breaking a 6 ½-pounder off, and thought ‘Oh no, it’s going to happen again.’ Thankfully, I finally got some in the boat, but I was definitely sweating a little bit today.”

Catching 25-pound bags each of the first two days, Chris mixed in a couple river bass both days. On Day 3, he said he headed straight to the lake to finish the event in style.

“It was good, but I didn’t have a lot of time,” he said. “People think it’s easy to go out there and catch a big bag, but it’s really not. I didn’t have a spot that was loaded. I only hit two spots on Day 3, but they weren’t loaded. I had to work for them and I needed all four hours to catch them.

“My starting spot on Day 3 never had a bass on it. On Day 2, I hit two spots that were dry. That’s what’s scary, when you’re making that run, if you hit two spots in a row that don’t have fish on them, you don’t have enough time to be running around.”

Chris said an unidentified prototype worm on a drop-shot was the main player this week, which he threw on a Daiwa Certate LT 2500, a 7-foot, 1-inch Daiwa Tatula Elite spinning rod, 10-pound Seaguar Smackdown with an 8-pound Seaguar Gold Label leader, on a No. 2 Gamakatsu TGW Drop Shot Hook with a 3/8-ounce drop-shot weight.

“I had a river spot that I was counting on for Day 1,” Chris said. “I caught three good ones off it. It’s just a break that they get on, and when its sunny and calm I could see them, that’s how I found them. They’re hard to catch though. They knew the gig was up because I only got two the second day.”

As for the lake, Chris said he mostly fished deep rock, usually piles or stretches of it in general areas. He said he fished small sections in 20 to 40 feet of water so that he wouldn’t get too bogged down.

The top 10 pros on the St. Lawrence River finished:

Brent Anderson of Kingston Springs, Tennessee took home an extra $1,000 as the highest finishing Phoenix MLF BIG5 Bonus member. Boaters are eligible to win up to an extra $35,000 per event in each Toyota Series tournament if all requirements are met. More information on the Phoenix MLF BIG5 Bonus contingency program can be found at PhoenixBassBoats.com.

The 2021 Toyota Series Presented by A.R.E. consists of six divisions – Central, Northern, Plains, Southern, Southwestern and Western – each holding three regular-season events, along with the International division. Anglers who fish all three qualifiers in any of the eight divisions and finish in the top 25 will qualify for the no-entry-fee Toyota Series Presented by A.R.E. Championship for a shot at winning $235,000 cash, including a $35,000 Phoenix MLF BIG5 Bonus for qualified anglers. The winning Strike King co-angler at the championship earns a new Phoenix 518 Pro bass boat with a 115-horsepower Mercury outboard.

The 2021 Toyota Series Championship Presented by A.R.E. will be held Oct. 28-30 on Pickwick Lake in Counce, Tennessee, and is hosted by the Hardin County Convention and Visitors Bureau.
For complete details and updated information visit MajorLeagueFishing.com.