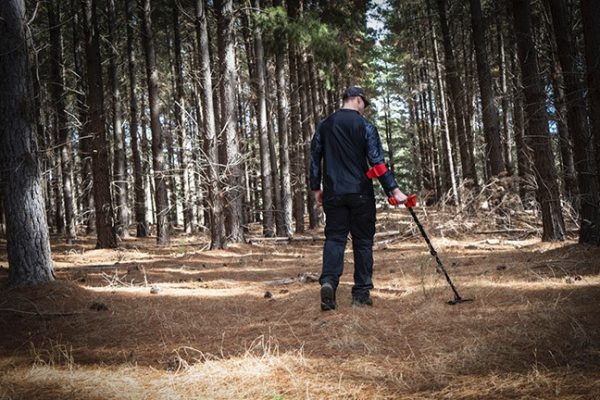 Even if you’ve never heard of Shawn Rauch, if you lose something valuable in South Florida and post about it, history shows he’ll probably find it 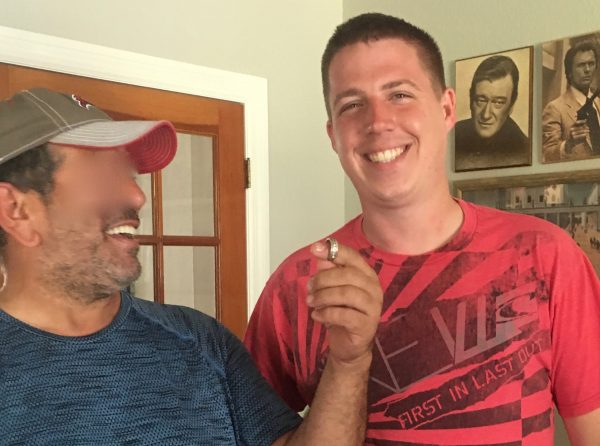 This gentleman lost his large diamond wedding band way off the coast out in the middle of nowhere in the Gulf of Mexico. He saved his GPS coordinates and Rauch found it within 30 minutes.

You’re vacationing in Florida, frolicking in the surf, when your $20,000 diamond and platinum ring slips from your finger. Most people in such a situation would believe their ring to be lost forever. Those who reach out to amateur treasure hunter and freelance jewelry finder Shawn Rauch, however, may have their prized possession back on their finger surprisingly fast. Rauch, you see, has a reputation as the guy who will not only find your lost valuable in South Florida, but will always try to return it to you, even if you don’t reach out to him first.

A resident of Sarasota, Rauch spends about 95% of his metal-detecting time searching the saltwater shallows along Florida’s Southwest Coast. While he mostly searches in the surf, he also scuba dives to locate lost valuables in deeper water. Rauch constantly searches the web and social media for posts about lost items and has a network of friends who do the same. Once he receives a lead, he attempts to contact the owner of the lost item to obtain detailed information about what they lost, when they lost it, and an approximate location. He then grabs his Minelab Excalibur II underwater metal detector and heads for the beach.

His stories – and success rate – are compelling. 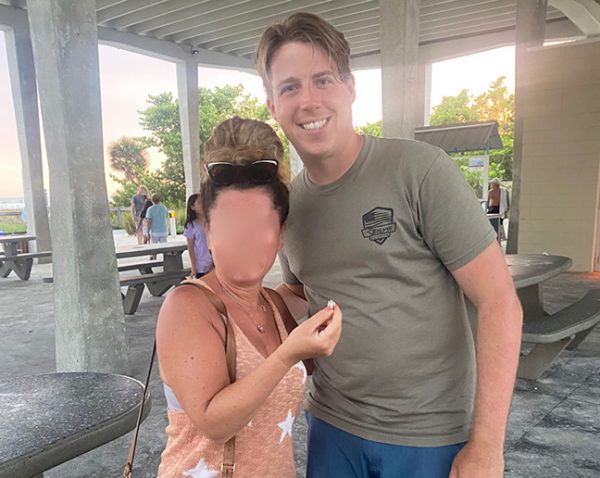 “I found this woman’s very large diamond and platinum ring valued at over $20,000,” Rauch says. “It took about three hours, but only because the ring wasn’t anywhere close to where she said it was!”

“One couple was visiting Florida when the man lost his wedding ring,” Rauch says. “They had already gone back home to New York when I contacted them through a social media post the man’s wife had made. They gave me the location and I went there and began searching. The waves were throwing me around like a rag doll, but I found their ring in about 30 minutes and was able to return their lost valuable.”

Rauch says when he started metal detecting he had dreamed of finding gold and diamonds. “I’ve found quite a lot of that, but the best treasures by far are the people I meet along the way,” he says. “That particular couple from New York now vacations here multiple times each year, and they always include me in their plans. They’ve taken me to nice dinners, family cookouts, sunset cruises, and even invited me to go skydiving. I’ve met some really good people and made new friends.” 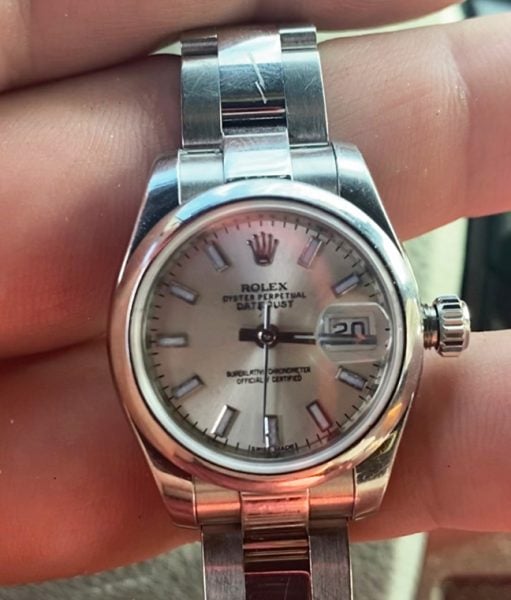 Rauch found this working Rolex one day out in the water while hunting with a bunch of detecting buddies. He has reached out to Rolex with the serial number, and the watch was never reported lost or stolen.

Rauch bought his first detector when he was around ten. It was an old Radio Shack model purchased at a garage sale. “My mind started to race thinking about the buried treasure I was going to find,” he recalls. “I found nails and a few modern coins in my backyard, but that was the extent of it and I soon quit hunting.” About 15 years later, he moved to southern Florida and got the itch again. He knew the detector he wanted – a fully waterproof and submersible Minelab Excalibur II model – and searched until he found a used machine in his price range. “I had done extensive research on metal detectors and knew that if I were to get back into the hobby, that’s the only machine I’d settle for,” Rauch says. 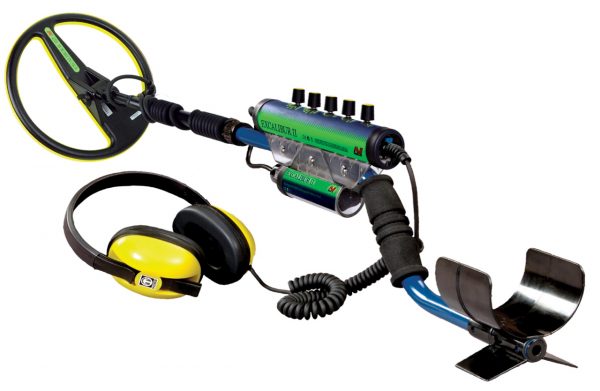 Shawn quickly made a lot of friends through the hobby who mainly hunted the land and beaches. He bought a Minelab CTX 3030, then purchased a Minelab EQUINOX 800 when it came out a few years later. “I have since made a name for myself by successfully recovering countless items for people underwater, so I like to focus on that now,” says Rauch, “but I still regularly hunt with lots of amazing friends that I would have never met if it wasn’t for this wonderful hobby and metal-detecting community.” 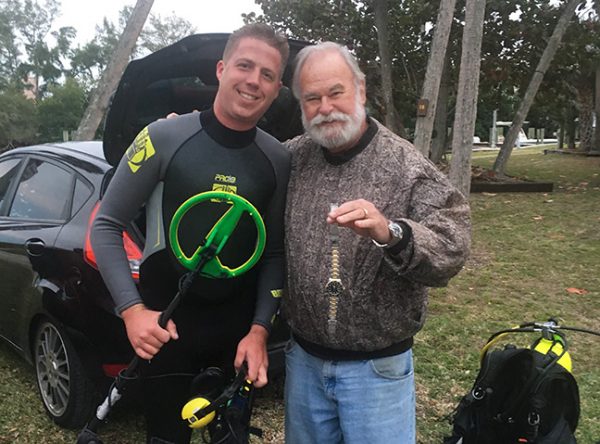 Rauch found another Rolex in 10′ of water on the coldest day of the year.

When queried about some of his best or favorite finds, Rauch doesn’t even know where to begin. “I have found Rolex watches still working after being in saltwater for who knows how long, extremely high-end diamond jewelry, and much more,” he reports. “I found a large, diamond wedding band way off the coast in the middle of the Gulf of Mexico. The man saved the GPS coordinates and it only took me about 30 minutes to find it.”

Ultimately, Rauch says his favorite finds are the ones he is able to return to their owners. “No amount of money could ever replace the reactions on their faces when they realize one of their most sentimental possessions – thought gone forever – is back from the bottom of the ocean or the raging surf.”

Shawn typically hunts alone during the week. This is when he does most of his jewelry recoveries, as well as scouting for hot spots he and his friends can hunt during the coming weekend. “Our weekend group outings are fun and sometimes my dad joins us, too,” Rauch says. “All of us are using the Minelab Excalibur II and we all usually find at least one ring each. We are usually hunting in shallow water, but sometimes I have to use my dive gear to search deeper water to make a find.”

Being in southern Florida, water temperature is not often a problem. If it is cold, Shawn dons his wetsuit and keeps on searching. While scouting on the beach, he spends hours trying to find areas that have been washed out – spots obviously affected by rip currents that have pulled all of the loose sand out into the Gulf, leaving a hard, rocky bottom. He advises other hunters to try to find any dark, deeper patches or any exposed rock in the water. “These are areas where heavier items sink and remain,” he explains. 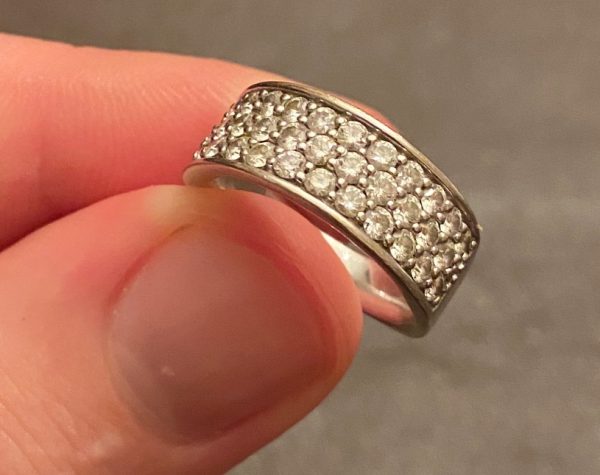 “You typically find items of a similar density clustered together in the same areas,” Rauch says. “If you’re only finding pull tabs, aluminum cans, and foil, take a walk further down the beach. If you start finding lead fishing weights, slow down. That means this area will likely produce some really nice things. Gold rings and jewelry are often found with these heavy lead sinkers.”

Even though Rauch meets plenty of great people through the course of his own detecting work, he still makes time to attend a few organized metal-detecting events each year. These are often “seeded hunts” where participants pay an entry fee to hunt for old coins and prizes that have been buried. “I don’t go to these events for the prizes, but for the people,” he says. “I meet so many incredible and interesting people from across the country at these events and have made many new friends.” 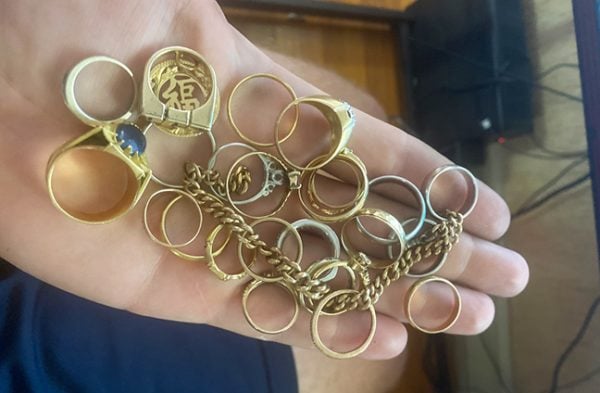 Just a sampling of the gold rings Shawn Rauch has found within the past year in the waters of the Gulf Coast.

If you ever find yourself heartbroken by the loss of a valuable personal item in the sudsy waters of South Florida, you’d do well to track down Shawn Rauch. Whether it’s his skills, intuition, research, or the special abilities of his Minelab Excalibur II detector – most likely a combination of all four – chances are more than good that he can find and return your item… while putting a smile back on your face in the process.