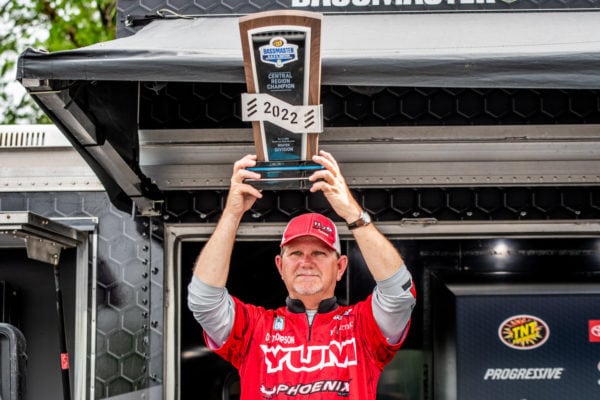 GROVE, Okla. — Doug Thompson and Tim Carmouche finished in a statistical tie for the lead after Friday’s final round of the TNT Fireworks B.A.S.S. Nation Central Regional at Grand Lake, each with a three-day total of 42 pounds, 7 ounces.

But because Thompson had the biggest single-day bag between the two of them — a five-bass limit that weighed 18-11 on Day 1 — he was named the victor and earned $5,500.

With a Day 2 bag weighing 13-9 and a final-day limit of 10-3, Thompson also earned a spot in the 2022 Nation Championship in November as the top finishing Arkansas B.A.S.S. Nation boater.

While Thompson has qualified for three Nation Championships previously, with one of those trips ultimately resulting in a ninth-place finish at the 2014 Bassmaster Classic at Lake Guntersville, the Mabelvale, Ark., angler had never won a Regional before Friday.

“I’ve been fishing this since ‘07 and you get to know the guys you have to beat in this thing,” Thompson said. “They were all lined up there this morning and I thought, ‘This is going to be tough.’ I’ve wanted (this trophy) for a long time. This is an amazing program. Guys who aren’t fishing it are missing out.”

Heavy rains throughout practice and the first two days of the tournament caused Grand Lake to change every day. The first day, the lake was well below full pool. Day 2 saw it rise to just above full pool.

On Day 3, the Bassmaster crew was forced to move the weigh-in stage away from the pavilion at Wolf Creek Park as the water rose close to 5 feet overnight and left anglers scrambling to find patterns.

Fishing a mix of rock and wood, Thompson weighed in the second-biggest bag of the tournament on Day 1 in an area where he had not practiced but knew about from a previous tournament. He said several other key areas played a role as well.

He cranked a squarebill around rock each day before flipping a tube at wooded cover.

“I wasn’t expecting that bag. I didn’t touch it in practice because I didn’t want to stick any,” Thompson said. “I just pulled in and it was on. I was able to ride that spot and a couple of other places for the three days.”

On the second day, Thompson had to slow down and use a shaky head and a Senko to catch his limit and maintain his second-place position. By Day 3, several of his spots began to muddy up, including his primary area, and the rock points he had been fishing were completely submerged. The water temperature had also dropped.

Around the corner from his primary area, however, was some cleaner water, and Thompson used a ChatterBait and the tube to secure a limit.

With bags of 16-4, 10-15 and 15-4, Carmouche ended his tournament with a three-day total of 42-7. While he may have lost the tiebreaker for the overall win, the Gonzales, La., native qualified for the Championship as the highest finishing Louisiana boater.

“I can remember exactly how many times I’ve made the state team, but this tournament has always been my crutch,” he said. “I have never done better than 11th overall in these Regionals and never won my state. This is awesome. I’m looking forward to representing Louisiana.”

After spending several days of practice up North, Carmouche spent the final day of practice on the South end of the lake and had 20 keeper bites. That strong bite continued into the first day of the tournament, as he caught 25 to 30 keeper bass on a wacky-rigged Senko and landed in sixth place.

Debris from the storms made it difficult for Carmouche to fish his primary area and he fell to 13th on Day 2 with a smaller limit.

“Down South, they were on beds. With the bad weather we had, you couldn’t really see them the first day. The second day, the water rose and you couldn’t see them, but I knew they were there. They just weren’t as active.”

With water continuing to rise, Carmouche moved to the mid-lake area where the muddy water and clear water began to mix. In the clearer pockets, he found bass holding in 10 to 15 feet of water and used a jig to land his 15-4 bag, the largest of Championship Friday.

On his way to Grand Lake, Ryan Lavigne was involved in an accident, forcing him to return home and pick up another boat before coming to Oklahoma. Despite the rocky start to the week, the Louisiana boater finished third with a 40-12 total that included bags of 15-8, 14-11 and 10-9.

“I’m very blessed to be where I am at. From a rough start to the trip to a rough practice and then building on what little I found every day,” he said. “I haven’t been fishing much the last few years and it feels good to get back into it and actually compete.”

Day 2 leader Mike Webster earned $500 for catching the Big Bass of the Tournament, a 6-4 largemouth on Day 1.

Thompson took home an additional $500 as the winner of the Garmin Tournament Rewards.

Kansas native Ray Cates took home the victory in the nonboater division with a three-day total of 25-10. After landing in 23rd with 7-5 on Day 1, Cates put together bags of 10-3 and 8-2 the final two days to claim the trophy. Cates has made a name for himself as a nonboater, winning that division at the 2021 Nation Championship on the Ouachita River and nearly winning two years ago at Pickwick Lake as well.

“I missed winning the championship (at Pickwick) by 2 ounces and managed to get the win down in Louisiana. I got back here today and made it happen,” he said.

The top boater and nonboater from each state represented in this week’s event punched a ticket to the TNT Fireworks B.A.S.S. Nation Championship scheduled for Nov. 9-11 on Pickwick, where three berths will be awarded to the Academy Sports + Outdoors Bassmaster Classic presented by Huk. The top boater from the Nation Championship will also earn an invitation to the Bassmaster Elite Series.

The tournament was hosted by the City of Grove.