The Allure of the Shore for NE Striped Bass 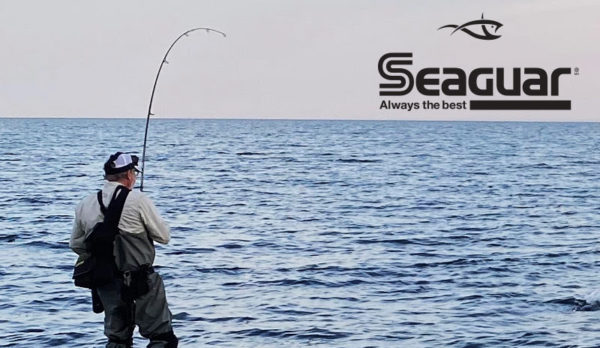 Many aspects of fishing relate to pursuing fish from boats, but fishing from shore is a major draw to some anglers. It’s especially popular in the northeastern states for a favorite regional quarry: the striped bass. Surf fishing is an escape for many anglers, including John Skinner, author of books on fishing, including Striper Pursuit: Surf Fishing Beyond the Basics and others, and New York surf fishing guide Bill Wetzel. 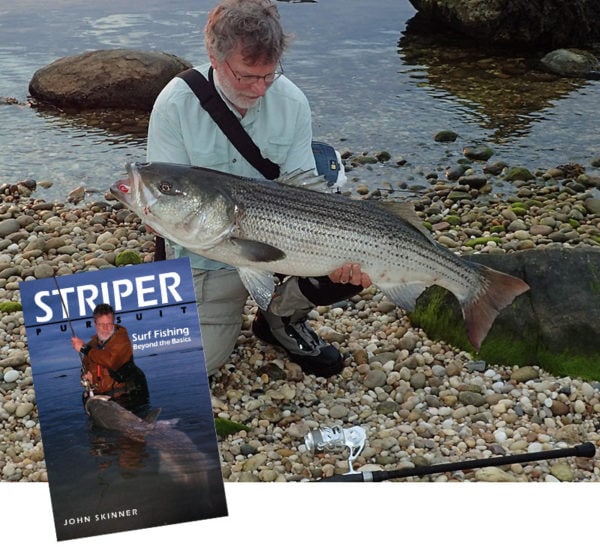 The When and Where

Skinner has figured out how to maximize his angling, spending time in southwest Florida during the coldest months in New York. He surf fishes May through November near Greenport Village on Long Island.

“Surf casting is huge in the Northeast and it starts in May when the stripers just start coming in on the eastern side of Long Island,” says Skinner. “Around mid-May, the larger bass started coming into the inlets on the Gardiners Bay side first and then on the Long Island Sound side after that. It has to do with water temperatures and the movements of the bunkers and squid.” 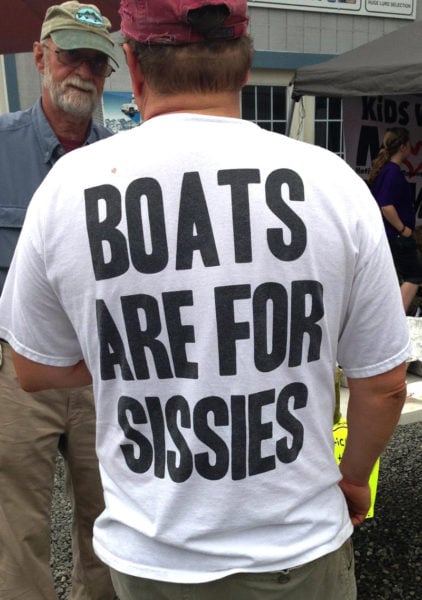 “The Bayside has plenty of pinch points that generate current,” he says. “On the Sound side, the shoreline is very irregular, affecting the current. There are eddies, boulders, current breaks and spectacular structure. There really isn’t a bad place to fish.” 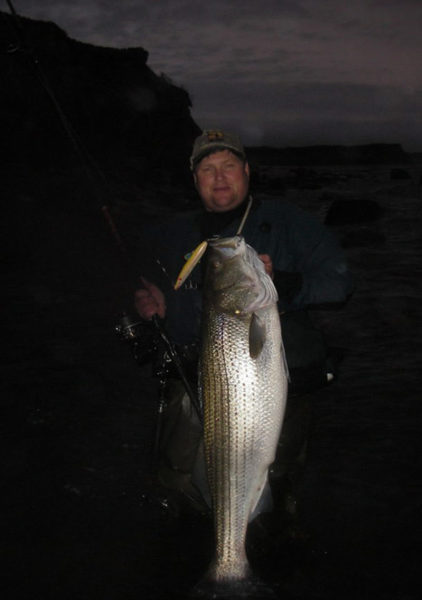 Not far away from Skinner is Bill Wetzel, who guides clients throughout Long Island, emphasizing the popular Montauk area. He says that’s his bread and butter, but he also takes clients to the back bays for stripers both early and late in the season.

“It starts in early April on the western Sound and the bite progresses east, but the back bays are first because the water is warmer there,” says Wetzel. “It could be ten degrees warmer than Montauk. It’s the same in fall — September, October, and even November can be awesome in the back bays. It’s reverse of spring, and the water is warmer and keeps stripers there longer.” 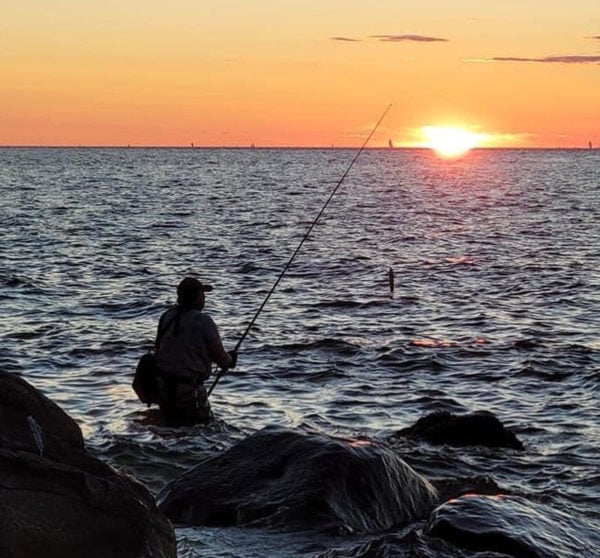 The Draw of Surf Fishing

Fishing from the shore offers a unique angling experience, including solitude and the ability to squeeze in a few hours when time is limited or when the weather isn’t cooperative. These are just a few reasons Skinner has devoted much of his fishing life to the pursuit.

“It can be as simple as grabbing a rod and your bag and off you go,” he said. “You can also fish under a tremendous range of environments, even with bad weather like Nor’easters where you can’t take a boat out. It’s you versus the environment and you have to overcome constraints like distance from the fish.”

Wetzel has also dedicated his life to it and guides clients with a wide range of possible experiences, from the thrills of standing in crashing waves in the middle of the night to fishing the back bays for the same species under vastly different conditions.

“You can fish the flats in the back bays and it’s like chasing bonefish,” he says. “Or you could be walking through the tall grass like a jungle to fish the drains. It’s a much different experience.” 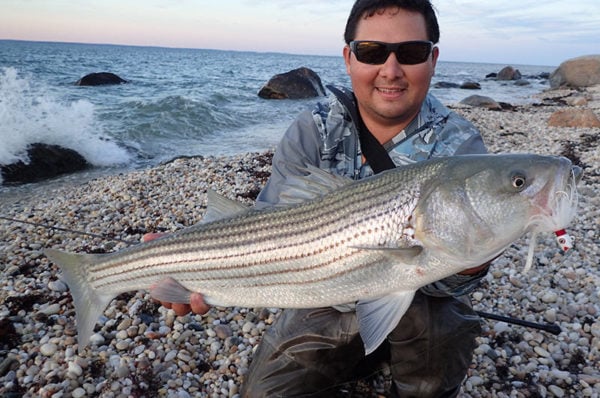 “When we first start in May, it’s a lot of 7-foot rods because we’re targeting the creeks and channels that dump into the bay,” says Skinner. “A rod that size can handle big fish, but if we are on the Sound side, it’s more often a 9- or 10-foot rod. That’s because we’re using bigger plugs and there’s a lot of structure and powerful fish in deep currents.”

He helped design rods for Lamiglas, and the GSBSKINNER model is available in one- and two-piece versions and designed especially for surf fishing for striped bass. So is the J&H Tackle Dark Matter Skinner surf rod, a 9’2″ medium rod with a moderate action. For 9- and 8- and 10-footers, the Lamiglas GSB models are his preferred rods.

Skinner matches his rods with Tsunami SaltX 4000- and 6000-sized reels along with Penn Spinfishers and spools them with 30 to 50 lb braid with 50 lb Seaguar Blue Label or Inshore fluorocarbon leader material. 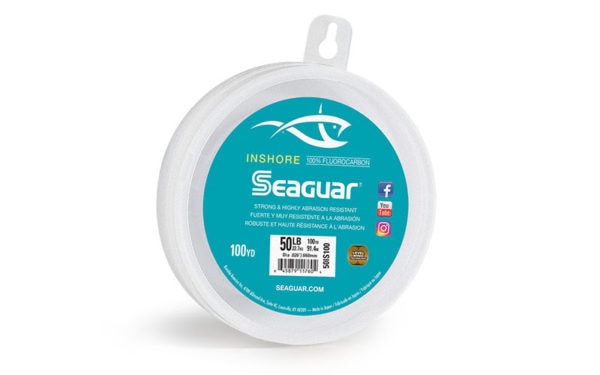 “The fish are not overly line shy and a 50 lb test is needed to stand up to the rocky environment,” Skinner says. “I’ve been incredibly impressed with the abrasion resistance and use the same Blue Label and Inshore leader material for my tarpon fishing in Florida. If it can handle the chaffing from a big tarpon, that’s saying something.”

For lures, it’s hard to beat bucktail jigs, according to both Skinner and Wetzel. Skinner also frequently fishes pencil poppers and Wetzel likes to fish the Daiwa SP Minnow and small 1-ounce darters.

“Bucktails are a standard everywhere and in all environments for striped bass,” says Skinner. “It could be everything from ½-ounce jigs to 2 ounces or even 3, 4, or as much as 6 ounces in the current. The key is to keep it down and in the strike zone.”

Wetzel prefers even lighter bucktails at times when fishing the back bays for stripers. “It’s a much quieter and stealthier type of fishing than the Montauk scene and ½- or ¾-ounce bucktails are good, and I’ll go down to 3/8 ounce at times,” he says. 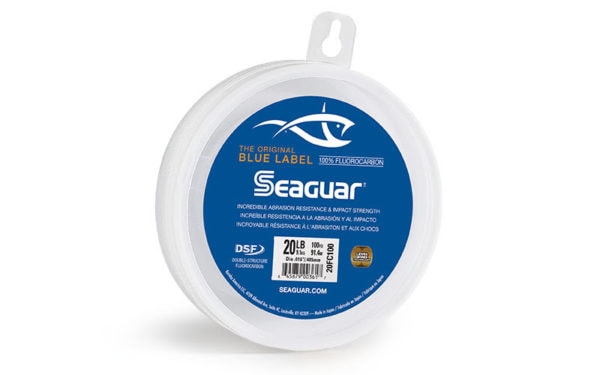 “I’m a believer in Blue Label fluorocarbon leader for fishing the back bay and it gives me more confidence to get more bites,” says Wetzel. “I’m more comfortable with fluorocarbon back there and it’s fantastic for how well it performs in that environment.”

Surf fishing is a way of life in the Northeast and striped bass have a cult following that’s unmatched anywhere else in the country. Targeting these prized fish comes down to understanding their seasonal movements, selecting the right gear to tame them, and being dedicated to the pursuit.