Ladson, SC (May 3, 2022) – Any way you view it, a pot-bellied 14-inch “seven-striper” from North America is one impressive yellow perch. But show us a true 20-incher—a fish Swedish angler Tomas Helge Sköld calls ‘perchzilla’—and American anglers might just drop what they’re doing and hop on the next flight abroad.

The transformation of a species began about 100 million years ago. As tectonic plates shifted and separated North America from Eurasia, once-related plant and animal species found themselves at opposite ends of the globe. Fish and other animals on the now-detached landmasses evolved within new habitats, shifting body shapes, coloration and growth potential. European pike developed a tolerance for brackish water, growing to astounding top-end sizes of 40 to 55 pounds.

Among the ubiquitous perch, a similar evolutionary dynamic, known as speciation, produced two discrete species—each prized for its predatory nature and willingness to bite lures. Today, North America’s Perca flavescens inhabits a wide breadth of waters from west Canada to New Brunswick, south to South Carolina and west to Kansas. A 14-inch 2 pounder sets the benchmark for an American trophy. A fish of those proportions wouldn’t, however, raise many eyebrows in Europe. Naturally inhabiting lakes, rivers and the brackish waters of the Baltic Sea across large swaths of Europe and northern Asia, European perch (Perca fluviatilis) have also been introduced into Australia, New Zealand and South Africa. In 2010, the River Meuse, Netherlands produced a colossal 8-pound 4-ounce specimen.

“Our perch often grow extremely slow, though they can live over twenty years and exceed 24-inches in length,” notes Mario Sbrzesny, an exceptional perch angler and Z-Man® lure fan from Stockholm, Sweden.

“Here in the UK, while we catch many larger perch, a 3-pound specimen is considered the holy grail amongst anglers,” suggests John Watson, Z-Man Ned rig disciple and editor of Angling International / Tacklestream magazines. “In my opinion, the growing popularity of perch fishing has been influenced by adapted American bass techniques like the Ned rig and the Finesse TRD™ system,” believes Sbrzesny. “The decline in our pike populations has also played a role. But there’s no doubt, Z-Man ElaZtech systems have greatly influenced the Scandinavian and European perch scene.”

He further notes that, like their American counterparts, European anglers spend appreciable time locating perch— a species known for its nomadic, grazing behaviors. “Most of our larger perch prefer to hunt along structure, usually in large roving wolfpacks,” notes Sbrzesny. “When they’re meandering across vast spans of featureless terrain, something as simple as a bigger stone can attract a lot of fish. Sunken trees, docks, bridges and especially, weed beds attract the most consistent action. Low growing grass on sand or other soft substrates gather crayfish and other invertebrates, as well as baby perch, which our larger perch eat like candy.” 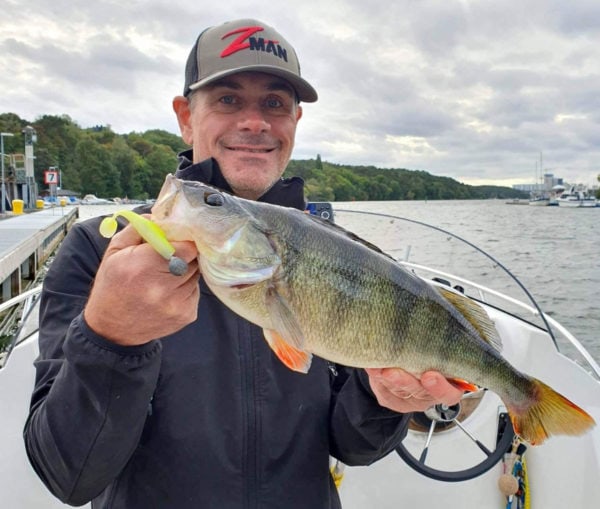 Once anglers unearth a sizeable pod of fish, Watson says it’s possible to anchor or spot-lock and work the school for hours. While ripping crankbaits can be effective for the first few active biters, Watson much prefers a subtle yet lively presentation. He favors a Z-Man NedlockZ™ EWG jighead and TRD TubeZ™ or Baby GOAT™. “Affixed to the compact, weedless jighead, a single ElaZtech bait can catch dozens of perch and even last a full session or more before re-rigging a new bait becomes necessary,” he says.

The baits’ buoyancy, Watson suggests, also provide a decided advantage. “As grazers, perch are attracted visually to vulnerable prey items,” he says. “When you pause your retrieve, the buoyancy of ElaZtech pivots the jighead, tipping the bait’s tail up off bottom, exposing it to the eyes of big perch on the hunt.”

Adds Sbrzesny: “It’s taken Scandinavian anglers five years to embrace these types of softbaits; people were slow to accept the practice of storing ElaZtech baits separate from plastisol baits, or in their original bags. Now, the amazing advantages of these baits have made them our go-to presentation; they catch more fish per bait, offer lifelike buoyancy and even provide environmental benefits over traditional plastics. Most of the best perch anglers here now fish these baits as an afterthought.”

For Sbrzesny and Perch Pro’s Sköld, one interesting and effective means of presenting ElaZtech finesse baits is something they call a Cheburasca (or Cheb) rig. Employing a free-swinging, pivoting weight-to-hook connection, the Cheb rig imparts “delicious, natural, lively swimming actions to any buoyant ElaZtech bait.” When you pause, the loose, free connection gives the bait even more freedom to pivot and elevate off bottom. For larger, extra selective perch, the naturalistic stop-pivot-rise maneuver often provides the decisive strike trigger.

While standard European Cheb rigs allow the angler to quickly change weights to match conditions, a Z-Man Texas Eye™ Finesse Jighead offers an alternative swinging hook-to-jighead connection, widely available in North America. Other alternative “lift rigs” such as dropshot or Tokyo rigs, exhibit the lively, buoyant nature of ElaZtech baits and appeal to the discerning eyes of the largest perch.

“Should I be forced to fish just one bait for monster perch,” interjects Sbrzesny, “I would tie on a Slim SwimZ on a Ned head, alternately fishing it as a swimbait or a Ned. If that combo fails to catch perch, I go home.”

Adds Z-Man’s Glenn Young: “It’s been amazing to witness the rise in popularity of Z-Man baits among European anglers, particularly perch enthusiasts, over the last five years. Fascinating that the same techniques and Z-Man baits used by bass fans here have been so embraced by top anglers across the ocean. It’s exciting to see. And the fact is, we’re just getting started and continuing to develop new baits and techniques, to the benefit of anglers around the world.”