Extravagant Hunting at Lake of the Woods Minnesota is a hunting paradise thanks to millions of acres of public hunting land. But finding a great place to hunt is often as challenging as the actual hunting itself.

Minnesota hunters are fortunate that the search is not nearly as difficult as it is in many states, where public land is rare. The most commonly hunted public lands in Minnesota are state wildlife management areas (WMAs), state forests, national forests and federal waterfowl production areas (WPAs). Be sure to check the Minnesota DNR website for complete details on seasons and licensing. Lake of the Woods County, a hunting haven, offers thousands of acres of public hunting lands in addition to the waters of the Rainy River, Big Traverse Bay on the South Shore and the Northwest Angle. Ample hunting opportunities of all kinds exist including field hunting, jump shooting, and hunting over decoys, river, sloughs, big water, islands and more. Here are some examples of the species you will find in this area. Grouse hunters must wear at least one visible article of clothing above the waist that is blaze orange or pink. This could be a hat, jacket or hunting vest. Remember to stay abreast when walking with other hunters in the woods so you remain visible and behind the line of fire. Ruffed and Spruce grouse season is now open running until January 1, 2023. The Ruffed & spruce grouse combined limit is 5.

HUNTING HAVEN FOR DEER: Soon, Lake of the Woods will declare its “National Orange Season”. This is affectionately labeled as everyone wears orange during the season for the beautiful Whitetail deer. With so much public land, deer hunting opportunities abound. Both archery and rifle seasons are permitted in this part of Minnesota. Locals joke that there are probably more deer in Lake of the Woods County than people. Trophy bucks are shot each and every year in the area.

Hunters must do the following:

Hunting season is unique at Lake of the Woods because avid sportsmen can don blaze orange for whatever hunt they want and then they can get in their boats and hunt for that trophy fish. Big Traverse sees walleye, perch and northern moving towards the bays and the river area when the waters start to dip in temperature.

Shiner Minnows travel up the Rainy River and do their spawning and the walleyes that are hungry all the time, chase them up river. It’s not uncommon to see hundreds of cars lining the highway up-river at Vidas Landing, Frontier Landing and Birchview Park.

All are dressed for the cooler temperatures found during hunting season and cooler waters underneath their boats. Catch

and Release is practiced during this time of year which protects the great fishery of Lake of the Woods. Fish for that trophy walleye but don’t be surprised if you happen to snag a sturgeon. What a fight they give the anglers, but once again it’s catch and release. 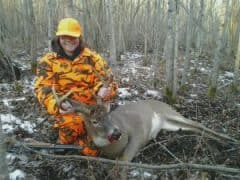 So, get out your orange duds and make sure you have your poles in good condition and come hunting at Lake of the Woods for the time of your life!!!

For more information and lodging opportunities, visit our website at www.lakeofthewoodsmn.com