Today’s walleye warriors are armed with the most sophisticated electronic mapping systems in the history of the sport. Yet surprisingly few take full advantage of one of the most basic but important features at their fingertips-the humble waypoint. 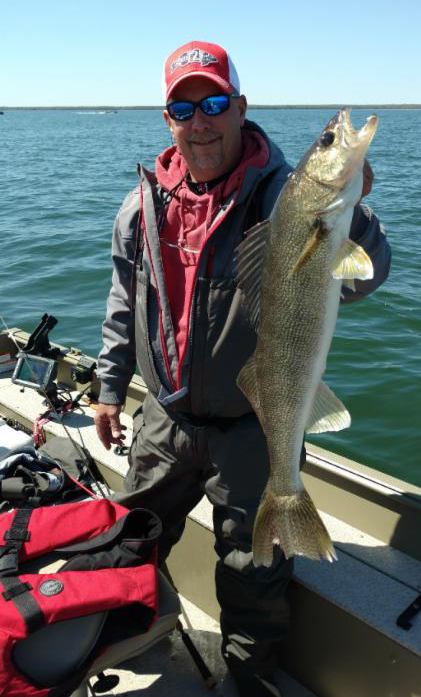 “Waypoints allow you to create an extremely detailed map of fish
location and activity, providing insight into present behavior and long-term trends,” says veteran walleye guide and decorated tournament competitor Scott Glorvigen.
“They’re extremely easy to use and cost absolutely nothing to add to your lake map,” he continues. “And they’re just as effective on a $200 plotter as they are on a unit costing $3,000 when it comes to building a picture of where the fish are and how they react to changing conditions.”
While many otherwise savvy walleye anglers are reluctant to hit the button and drop waypoints marking notable locations, Glorvigen isn’t shy about it. His charts are sprinkled with a healthy dose of these electronic breadcrumbs, which guide him to more fish in a variety of settings.
“Regardless of the time of the year, you can use waypoints to figure out patterns and catch more fish,” he says.
Here’s how to get the most out of waypoint technology on your next fishing trip.
Waypoint 101
In simplest terms, a waypoint is a set of coordinates used to mark a certain point for reference or future return. Waypoint technology has been around for years, and while it’s less glamorous than many newer, cutting edge GPS functions and capabilities, waypoints can still form the foundation of successful fishing strategies.
Waypoints are handy reference points for marking key spots on classic structure such as drop-offs, points and humps-especially when you find something notable while fishing that doesn’t appear on your base map.
“But waypoints are also really helpful when fishing large flats with relatively featureless bottoms,” Glorvigen says. “Little bits of cover and structure mean a lot in these areas. Against the barren backdrop, things like isolated rocks or weed clumps can be focal points of walleye activity, because they use them as ambush points to get at baitfish that are moving through the area. Yet most times you won’t see these hidden gems on a map unless you mark them yourself with a waypoint.” Toward that end, Glorvigen religiously punches in a waypoint every time he connects with a fish. “Not just walleyes, but pike and perch, too,” he says. “In fact, I hit the waypoint button as soon as I hook a fish, not waiting to see what it is. Regardless of the fish species, each one offers another piece of information that can be important in solving the puzzle.”
Some anglers may avoid creating waypoints because they fear spending time laboriously logging a variety of details. “But it doesn’t have to be time-consuming or painful,” Glorvigen says.
In fact, he says the number automatically provided when adding a waypoint is often all you need. “The number is enough to help me remember the chronological order of where different catches came from. It also makes it easier to recall things like fish size and species. With just an icon and no number, I could never remember all that.”
Glorvigen says waypoints help anglers focus on the most productive fishing areas available in large expanses of water. “These sprawling, nondescript areas are the places walleye anglers tend to drift aimlessly across,” he says. “But if you mark the best spots and target just these areas, you avoid wasting time straining fishless water.”
For example, instead of making marathon drifts across a massive flat, Glorvigen uses surgical tactics such as pitching jigs to specific hot zones, which allows him to spend more time catching and less time fishing. He takes a similar tack when fishing smaller structure, such as the fish-holding side of a reef or point.
Other tricks for making the most of waypoints include color selection. “When fishing a lake for multiple days, I use a different color for each day of the trip,” he says. “This helps me home in on productive areas, and also reveals trends such as changes in location from one day to another.”
Over time, a waypoint database can also increase your understanding of walleye behavior. “Waypoints build your knowledge library in regard to what fish do in response to other conditions such as changes in wind, weather and light conditions,” says Glorvigen.
“It’s almost like watching the ‘Wheel of Fortune’ on TV,” he says. “The more letters get turned over, the easier it gets to solve the puzzle. When you’re fishing, the more waypoints you put on the map, the easier it is to solve the mysteries of walleye location.”