BY Lake Of The Woods MN’s Joe Henry

The Warrior Boat Company located in Melrose, MN once again held their 10th annual dealer meetings called the Warrior Rally and the 7th Annual David A. Andersen Memorial walleye tournament on Lake of the Woods this past week. Although Warrior dealers and boat owners stayed at numerous resorts in the area, Wigwam Resort was the official headquarters again for these events.

144 Warrior boats with teams of two people competed for cash and prizes. The week was filled with unveiling new boats, some business meetings, friendships, a big tournament and a company that looks as their boat owners as one big family.

“This is definitely one of my favorite weeks of the year,” explained Kent Andersen, National Sales Manager for Warrior Boats. “Spending time with the Warrior family is definitely the highlight. Having this event up at Lake of the Woods is a big part of the success. There is something special about this area, the wilderness feeling, it’s peaceful, no big cities. It’s just the entire atmosphere.”

Test Rides on the Rainy River and Lake of the Woods

“We always have test rides and introduce new products at this event. We had 23 different models of boats on the water for demoing this year. We have people looking at Warriors come from neighboring states to try out various models on big water like Lake of the Woods. It is the perfect atmosphere,” explained Andersen.

I mentioned to Kent how I ran into a Warrior two person team at one of the resorts, a couple of really nice guys, who had a Warrior V238 with a 450 HP Mercury on the back. This was impressive! They said they made it back from west of Long Point to in front of Pine Island in 16 minutes in calm seas of course going about 60 mph. “Our largest boat is a the Warrior V238. It is rated for a 450 HP motor. There were probably 25 boats like this at this year’s tournament, not all with 450s however, some had 400’s.”

The Format of this Tournament is Catch – Record – Release

The one criteria you had to have in order to fish this tournament, you needed to be fishing out of a Warrior Boat! This tournament has grown from 34 boats when it first began in 2016 to the 144 Warrior boats this year.

In asking Andersen how fishing was overall, without hesitation, it was good. “Anglers caught good numbers and lots of big fish. It goes to show the slot works. We love AIM running our tournaments and doing the Catch Record Release format as well.”

The CRR is a format where anglers take two pictures of a walleye they want to register. One photo is a measurement of the walleye on an official bump board handed out at the beginning of the day by tournament officials. The second photo is a “hero” shot, showing the markings of the fish so it cannot be used a second time.

Anglers also receive a score card to record their lengths. At the end of the day, anglers determine their 5 longest walleyes and use the conversion chart to covert the inches to weight.

This format does a couple of different things. First, it allows walleyes in a protected slot to be counted as fish are being released. Second, it allows the tournament anglers to release the fish back into the water.
Results of the Tournament Nate Gilkey and Dan Pfeifer got the win in this tournament with a eye catching weight of 49.37 lbs for 5 walleyes. That is nearly a 10 lb average per walleye!

This tournament draws a lot of great anglers from across the Midwest. Some of them have fished Lake of the Woods in the past. For some, they have always wanted to and this is a great reason to come. 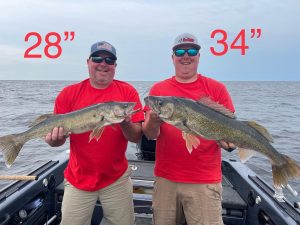 Although this walleye was caught pre-fishing for the tournament, it was certainly getting a lot of attention. One of the anglers pre-fishing with Mike Olson of Fish Addictions TV was Brian Konz. Brian caught an absolute beast of a walleye, 34 inches to be exact! Not only was this fish long, it was big. What was really impressive is it dwarfed a big 28 inch walleye caught at the same time, which really gave it’s massive size perspective.

It was a good week and special week for the Warrior family up at LOW. Andersen spoke about how the Warrior family loves coming to Lake of the Woods. “We would like to thank Wigwam and the entire Lake of the Woods resort and small business community for such a nice welcome to our Warrior Boat family. We are very appreciative and look forward to 2023!”

Info about the Lake of the Woods Area

Lodging around Lake of the Woods