Dog Days Walleyes on Lake of the Woods

Dog Days Walleyes on Lake of the Woods

There is a well-known pattern of catching big numbers of walleyes that takes place each year during the late summer or dog days on Lake of the Woods. Massive numbers of walleyes make their way to the big open expanses of basins of the lake. These huge expanses are 30 – 35’ deep and full of walleye attracting forage. There are no weeds, flat structure and miles, and miles of nothing but walleyes. These walleyes can be caught a variety of ways, however, one of the most effective is covering water by trolling crankbaits.

In many Midwestern waters, the sultry days of August or “dog days” is a tough time to catch walleyes. The weeds are up, baitfish are prolific which are tough to compete with and catching walleyes consistently is downright tough.Lake of the Woods late summer is an anomaly. Many anglers actually plan their fishing trip during the late summer because the fishing is so good. Yes, you can catch fish a number of ways this time of year, but one of the absolute go-to methods for plucking basin walleyes is pulling cranks. 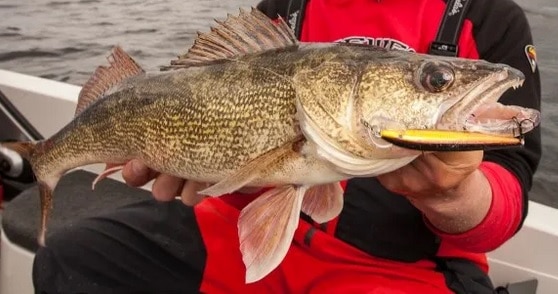 No man’s land this time of year is a prolific aquarium full of life. As the water warms, many of the walleyes slide to the deepest depths of this basin (30 – 35 feet of water) in search of cooler water and less light penetration. Most importantly though, there is a smorgasbord of bait in this part of the lake. Roaming schools of emerald shiners, tulibees, perch and trout-perch minnows (a minnow that lives in the deeper depths) are in abundance.

There is also a variety of critters walleyes eat that call the mud their home. Blood worms, a variety of invertebrates, and nymphs of aquatic insects (before they reach the surface to shed their skin reaching adult stage) are just a few.

So, here’s the scenario, tens of thousands of walleyes all living in a big expanse of open water. In most cases, there is very few “spot on a spot” areas that will group walleyes tightly. Thus, it makes sense to cover some water. Hence, pulling crankbaits is not only a great fit, but it is also effective.

The trick is to present the right crankbait at the walleye’s desired speed in front of or a few feet above the walleyes in the relatively deeper waters. With technology and ever developing products, getting a crankbait down to 35 feet has become much easier.

It isn’t realistic that most anglers will have downriggers on their boats. Up at LOW, many do, however. Getting cranks down to the bottom foot or two of the lake in 30-35 feet of water where the majority of the walleyes are living is key. Downriggers are extremely effective in consistently positioning the lures in the strike zone, even when the boat surges from a wave.

In other bodies of water, some may argue downriggers spook walleyes. Perhaps they do, not here, however. Maybe it is the stained color of the water, but year in and year out, riggers catch a ton of walleyes.

In today’s world, an angler can pick up an entire rod and line counter reel filled with lead core line for around $100. What a great option at a moderate price point to be able to play at these deeper depths. Lead core line is exactly that, line with lead as its core which causes it to sink. The more line you let out, the deeper your crankbait will reach.

In a nutshell, lead core line has a different color every 10 yards. For every color of lead core let out, your lure will go down an additional 5 feet. I really encourage anglers who may be intimidated by formulas and dive charts to keep it simple. Estimate how deep your crankbait dives. Figure out how much deeper you want your lure to run and let out what you believe is the amount of lead core to get you there. Then, troll and watch your rod tip.

If your rod tip starts to bounce, the crankbait is hitting the mud, reel line in 10-foot increments until it stops. If your rod tip does not bounce, let out more line until it does, you’ve found the bottom. Again, reel up line in 10-foot increments until you are not hitting bottom. This will get you in that bottom two feet of the water column, right where you need to be.

One disadvantage to using lead core is it takes a long time to reel in fish and let the lure back out. Because of this, there is lead core product I use that has been helpful. Suffix 832 Advanced Lead Core dives 30% deeper than traditional lead core which allows you to reach your desired depth with less line. To me, that 30% less reeling is worth something.

Braided line with a deep billed crankbait. When looking to reach depths in excess of 30’, some of the deeper diving crankbaits teamed up with a thin diameter braided or superline will get down deep. If the fish are hitting the bigger billed cranks, you are in business. If by chance you want to use smaller baits, it is tougher to get down deep with just the crank. When the walleye show a liking to the larger billed crankbaits, this method is effective.as been helpful. Suffix 832 Advanced Lead Core dives 30% deeper than traditional lead core which allows you to reach your desired depth with less line. To me, that 30% less reeling is worth something. I had a conversation recently at a sports show with an angler who spends a fair amount of time trolling the deep mud on LOW with success. He laughed as he said, “everyone has this fancy equipment, heck, we still use a 4 oz bouncer with a 6-8’ leader and a shallow diving crank and we catch all the walleyes we want.” There are a number of ways to get down there, and it doesn’t have to be rocket science. A tip, make sure to lower your bouncer slowly to avoid tangling.

A three-way rig is similar to a bouncer, but instead of a wire with a piece of lead as in the case of a bottom bouncer, a three-way rig uses a 6-12” piece of line down to a sinker. The third part of the three-way swivel has a leader to the crankbait. Believe it or not, there are days when three ways are the ticket and will greatly outfish a bouncer set up.

I have literally heard anglers discuss how they have had success on every shape, color, wobble, and brand. Here is my advice. The water is stained, meaning it is stained a light brown color from natural tannins. With this being said, as a rule, gold or bright colors dominate. Gold is a staple color on Lake of the Woods.

My go-to colors are gold, blue/chrome, pink and UV pink, firetiger and black. Yes, black. By raising the black crank up a bit, walleyes see that dark silhouette against the sunlight above. Just like night fishing, dark-colored lures can rule against the shine of the moon.

When fishing with a partner, I will start us out with two different colors and wobbles. When pulling through fish I can see on the electronics if the fish aren’t responding, we rotate lures, speeds, and nuances until something clicks and then we hone in. Every day can be different. It’s just a matter of going fishing.

Nuances to Get More Walleyes

During a Minnesota Tournament Trail event using lead core, I was reeling in a crankbait while we were trolling to check for mud as it didn’t seem to be running right. About 25% of the way in, I get hit, a nice walleye. My partner notices so he started reeling in and letting out and reeling in, as we are trolling, and he gets a fish. The rest of the day, we began trolling very erratically, speeding up to 4 mph, dropping down to a crawl, making sharp turns, and began to fill the livewell.

In another instance, I was trolling lead core in a boat that didn’t have rod holders. Consequently, since the rod was in hand, I began zipping the lure forward, dropping it back and BANG, a fish. For whatever reason, the walleyes that day wanted the lure to pause and take off abruptly and as soon as it took off again, they ate.

Every day is different, and it is up to us to figure out what the walleyes want. The point here is rather than just going in a straight line with the same crank at the same speed, mixing it up and noticing what happens will put more fish in the boat. Charters allow everyone to enjoy this bite.

There is a great option for those who don’t have a boat or equipment, don’t want to get so involved and want to simply relax and reel in walleyes. Jump on a charter boat. The resorts on Lake of the Woods have a large fleet of charter boats with very professional licensed charter captains. They provide absolutely everything needed for a great day of “Dog Days” fishing. Resorts combine groups making it possible to accommodate a single person or up to groups of 6.

The “dog days” of summer for many walleye anglers are a time to put down the fishing pole and wait for the cooler waters and dying vegetation of the fall bite. On Lake of the Woods, late summer is prime time, a time many anglers actually look forward to. Grab your trolling gear, a handful of cranks and be ready to reel in a bunch of walleyes!