Ponca City, Ok—May 22, 2019 —When surveyed, walleye anglers from around North America told the Bass Pro Shops and Cabela’s Masters Walleye Circuit staff there is only a few places that has great fishing anytime of year, one of those places is Lake Erie. Spring, Summer or Fall, Lake Erie provides a world-class opportunity to catch a fish of a lifetime and plenty for the freezer. 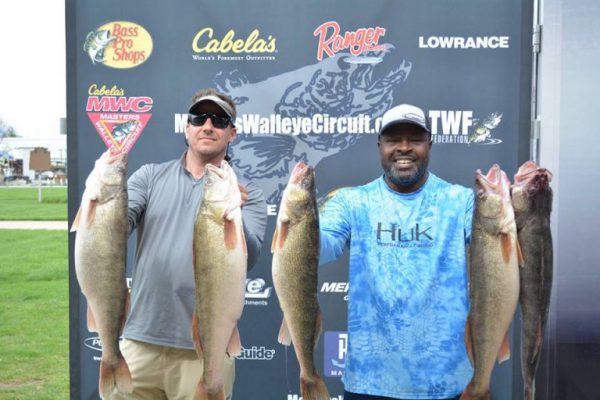 The numbers and sizes of walleye now found in the Ohio waters of Lake Erie are staggering, with catch rates over five times better than the “exceptional” rating, and even better than that in the month of June! (source: 2019 OhioDNR update) Anglers will likely find most fish ranging between 17-22 inches, and the previous Lake Erie MWC tournament weights tell a story of a growing bags. Looking back in the archives at masterswalleyecircuit.com, one will find the final weigh-ins to continue a trend in the ‘heavy direction.

Presented by Lowrance, the June 21-22 event will take place at the mouth of the Portage River and pits the “Toughest Walleye Angler on Planet Earth” against one another, all for a share of the large tournament purse and prizes. The “Team of the Year” race and “World Walleye Championship” qualifying continues to add another level of competition headed into this, the 5th event of the season.

Daily live weigh-ins at the Jefferson Street Pier are free and open to the public beginning at 3:00pm both days June 21, 22. If you can’t make it in person you can watch the weigh-ins live, online, at masterswalleyecircuit.com or on our Facebook page. Under the umbrella of The Walleye Federation (TWF), the Bass Pro Shops and Cabela’s Masters Walleye Circuit is North America’s longest-running and undisputed leader in team walleye tournaments and as an inductee into the freshwater fishing hall of fame, has set the standard for competitive walleye fishing for 35 years and is open to avid walleye anglers from all walks of life. The 2019 schedule includes eight qualifiers in six states, plus the 2020 Bass Pro Shops and Cabela’s MWC World Walleye Championship. Registration is now open for all events, and the registration deadline for the Lake Erie tournament is close of business June, May 17. Visit masterswalleyecircuit.com for full details.