September ‘skie tips – 52 pounder caught – How NOT to sucker fish 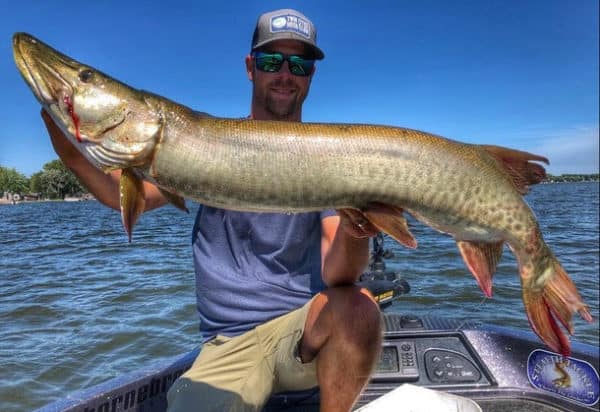 In case you haven’t noticed, summer’s officially gone and fall is HERE!

To kick off the season, we reached out to Metro guide Ryan McMahon and asked him to share some tips for catching muskies right now….and here’s what he had to say:

“Fall musky fishing is upon us, and this month is one of the most exciting for pursuing big fish. When talking fall fishing, I often find myself putting the season into different categories such as “early fall” or “mid-fall” or “early-late-mid-fall” (joking about the last one 😂).

“What I’ve come to realize is that the first half of fall is basically just different waves of fish pushing up onto structure. Different moon phases and weather patterns seem to drive fish from their warm weather deep haunts up onto shallow water structure, and I like to be there to intercept them!

“Shallow is a relative term when it comes to muskies. I’ll catch muskies in less than three feet of water on some lakes – these are typically darker water bodies. On fisheries with gin clear water, eight feet might be considered ‘ultra shallow’. Regardless, you’ll find me checking these shallow areas when water temps drop through the low 70’s and upper 60’s.”

FYI – Ryan wrote this up earlier this week, so with this crazy cold weather, water temperatures might already be in the 60’s where you’re at.

Now let’s dig into some of Ryan’s favorite baits:

“When I’m fishing shallow, I’ve traditionally liked fast moving baits like bucktails and prop-style topwaters. I can cover water quickly and pick off the aggressive fish.

“That said, we’ve been getting a lot of our best bites on slower moving baits lately. Flaptails and Hawg Wobblers have been a few go-to choices. Additionally, I like to fish the Cannonball Jr. slower than most to get fish to follow up behind it, then I’ll close the deal by speeding it up once fish start pushing a wake.

“Another bait that has made a huge difference in my boat is a new one from Kramer Bros. Tackle called the Woodtick. This bait has the Revolution style blade with tickers, but has a buoyant wood body that allows it to be fished slowly right under the surface.” “These slower moving baits have become go-to’s for me as fish push shallow and remain shallow throughout all the phases of fall.”

Thanks for the info, Ryan! Understanding where fish move throughout the season and why they do it is extremely important if you want to consistently put fish in the net..

BTW, no link to the new Woodtick bait because it hasn’t technically been released yet….shhhhhh

Love, love, LOVE this time of year as we typically see a ton of new stuff coming out from musky bait makers. New toys to play with is never a bad thing!

It also means we won’t have to endure secret/teaser/prototype posts much longer…. 😉

Some guys and gals can’t handle the anticipation, ya know!? This is an exciting time for all of us musky-heads.

We’ll keep ya up to date on the new stuff coming out this fall/winter, so stay tuned!

So that’s early fall…. but as we progress later and later into the season, suckers will start becoming more of a factor, too.

We all know that anytime you fish livebait, one of the biggest keys to success is keeping your bait alive and healthy, and a good harness can help with that.

Last year, we had Ryan do a tip on fall sucker fishing and he mentioned the Stealth dual treble inline harness as his top pick.

There’s no doubt that premium gear will up your chances of catching fish…. but dumb luck is undefeated 100% of the time!

Where should we start???

The single hook “sucker harness” (which is known to be terrible for the fish) or possibly the 400ish pound main line? What about the not-so-lively lookin’ sucker dangling there.

This is a clinic on what NOT to do, but it’s also proof that you don’t always need the “perfect” presentation to get bit. 😂

Ironically, this is one of the clearest underwater sucker strikes we’ve seen captured on camera – so there’s that! Here’s a pic of the monster ‘skie: The writeup says 57 inches long and 52 pounds on a certified scale, but what’s most interesting is where he caught it:

“Straight Lake is not a natural muskie lake, has never officially been stocked with muskies and the DNR has never captured one while doing its netting surveys.”

Apparently, it’s a stone’s throw away from a rearing pond in the Park Rapids area.

Gotta say it….We hate seeing mammoth muskies like this killed, but we’re not going to rip on a guy for taking a legal fish.

We also couldn’t help but notice this quote from Brandon in the writeup:

“It jumped one time. When he jumped and I saw him, I (defecated). I literally did.”

Probably more than I’d be willing to admit, but to each their own!! 🤷‍♂️

The Muskellounge
That’s one of the best restaurant names we’ve heard in a while…. and no surprise, it’s smack dab in the heart of the musky-crazed state of Wisconsin.

I can’t imagine opening a food joint during the middle of all this COVID-19 craziness. We’ll definitely be pulling for them!

Here’s a little writeup if you’re interested in more info. No clue if their food is any good, but if we’re ever in the Madison area, we’ll sample the cuisine and report back with our not-so-expert review. 😉
QUICK HITTERS:
– Low-light topwater muskies w/ Todays Angler (video)

– How to perform an in-water musky measurement (video)

– States with the most anglers per capita (link)

This Week’s Monster Muskies:
Congrats to Derek Diotte on crackin’ a new PB musky out in Quebec with this 54 inch French Canadian Esox masquinongy. Next up, we’ve got an extra-portly 46 inch northern Wisconsin tiger musky from Tom Boley. You can watch the entire cast-to-catch on his YT channel, too. This long, lean 51 inch sea snake from James Madigan spanked a Stagger 9/10 bucktail. Such a clean fish, I’d love to see her in a month or so! #FallFeedBag