Fall is a season of change: green leaves turn brilliant shades of amber and crimson, resident waterfowl feel primal urges to gather in large numbers and fly south, and many outdoor enthusiasts contemplate trading their boat seats for deer stands. Yet, across the pine-studded Northcountry, stark changes beneath the water’s surface fuel walleye and musky feeding frenzies, driving them to pack on the pounds in advance of winter’s icy grip. Now is perhaps the best window on the entire calendar to tangle with a toothy trophy of epic proportions, and Seaguar® braided lines and 100% fluorocarbon leaders stand ready to connect you with fantastic fall fishing. Short days and cooling water temperatures elicit dramatic changes to aquatic ecosystems as summer pivots to fall. Among the most noticeable of these is a reduction in the volume of vegetation available in the shallows. As weeds die back, baitfish that had successfully evaded predators in the lush greenery all summer now find themselves vulnerable, causing them to school up and head to remnant green weed edges and adjacent open water. Many weed-oriented fish, including walleye and musky, follow this annual prey movement, ready to cash in on Nature’s sudden bounty. As such, both of these apex predators are especially responsive to live bait presentations during this bountiful, if brief, fall period. 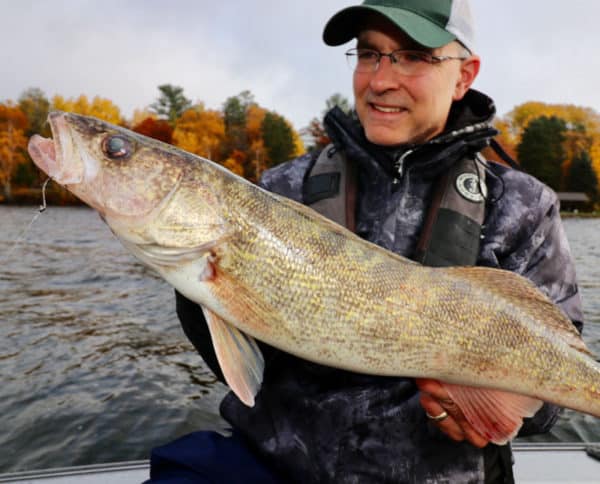 Across their range, fall walleye can be found concentrated along steep breaklines and around deep humps and sunken islands during the daytime hours, marauding on schools of baitfish that have been displaced from the shallows. Typical depths will frequently be in the 25- to 35-foot range featuring a relatively hard bottom – sand, gravel, or rock – but don’t overlook even deeper waters into the 40- to 50-foot range on very clear lakes in late fall. Feeding fish will typically position themselves on the upwind side of these structures; keep a close eye on your fishfinder’s display for the telltale sonar arches of walleye below. The classic approach for deep water walleye in the fall is to present oversized minnows – especially creek chubs or redtails – on a live bait rig. Begin with a 7’6”, medium-light power, fast action rod equipped with a 2500-series spinning reel and spooled with 20 lb test Seaguar Smackdown™ in the high-visibility Flash Green color pattern. This 8-strand braided main line features an extraordinarily tight weave, reducing its diameter to minimize water resistance and enhancing its sensitivity. Next, thread on a ½ oz (or larger) egg sinker, followed by a bead and a small, high-quality swivel. Finish the rig with a three- to four-foot leader of 6 to 8 lb test Seaguar AbrazX® leader and a 1/0 Octopus hook. One hundred percent fluorocarbon AbrazX is uniquely formulated for unparalleled abrasion resistance, a critical feature when fishing around boulders and rocks – and chasing fish with a mouthful of sharp teeth. Select a large bait – six inches certainly isn’t out of the question – and hook it carefully through the upper lip to keep it lively and kicking. Lower the rig to depth, and pull it slowly through those sonar arches. Nervous minnows frequently telegraph an impending walleye attack, and you’ll feel every twitch with help from Smackdown and AbrazX.

Pardon the pun, but muskies are suckers for big live baits in the fall. This is a time of the year when no meal is too big for those at the top of the food pyramid. Because live bait is so effective, it’s critically important that musky anglers follow contemporary, conservation-minded best practices to ensure that trophy-caliber fish can be released unharmed after a quick measurement and hero shot.

There are two ways to present live suckers to muskies in the fall: suspended beneath a bobber or vertically below the boat. In either case, select a medium-heavy, fast action musky rod. I favor rod lengths in the 7’ to 7’6” range to move a lot of line on the hookset. Pair the rod with a robust baitcasting reel, one with a bait clicker to provide an audible alert when a musky pulls line from the reel. Spool up with 80 or 100 lb test Seaguar Threadlock, a 16-strand, hollow core braided line, which provides all the strength you need to manage the lake’s most fearsome predators from hookset to landing net. If you plan to fish with a float, thread a bobber stop and then a cylindrical slip bobber onto the line; this float style is much more hydrodynamic than the ball-shaped, clip-on floats of yesteryear, reducing the frequency of the bait being dropped after the initial strike. Then, add some weight; big suckers are strong swimmers, and we need to use enough weight to keep them from swimming toward the surface, away from lurking muskies; egg singers in the 2-3 oz range work well. Next, add a Seaguar AbrazX Musky/Pike 100% fluorocarbon leader. This is a strong, stealthy replacement for wire leaders, which can cause severe damage to muskies that tend to roll and get wrapped up in the line during the battle. Seaguar AbrazX Musky/Pike leader is available in 25-yard spools, so that you customize your leader length to suit your own particular needs; use three feet of 100 lb test AbrazX to craft your sucker leaders. The business end of the presentation is a quick-strike rig: a multi-hook harness that allows you to set the hook quickly after the musky strikes, rather than waiting for the musky to swallow the bait and risk severe damage or even death during or after the catch. Dress the rig with a big sucker minnow. On the overall sucker size scale, you’ll want to fish with big baits early in the fall, bigger baits when the leaves are all off the trees, and the biggest suckers you can find when you’re busting skim ice at the ramp while launching the boat. Present your live offering along remnant green weeds early in the season, and then follow muskies out to rocky reefs and bars as winter approaches. The magical fall months have arrived and with them come opportunities to pose for pictures with your biggest fish of the year. Spool up with Smackdown and Threadlock braided lines, and close the deal with AbrazX leaders, and you’ll quickly appreciate that fall fishing, with help from Seaguar, is Always the Best!