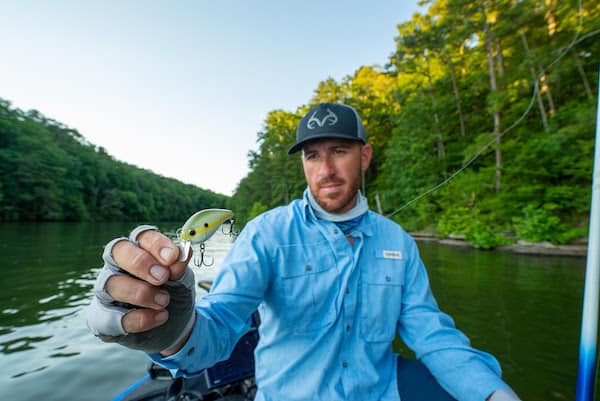 The angler dominating the pro bass fishing scene with first-place finishes has scored an industry first – representing two hardbait companies at the same time. Major League Fishing standout Jacob Wheeler, already a Rapala pro, will simultaneously fish and promote 13 Fishing hardbaits as well.
“I couldn’t be happier to work with the guys at 13 Fishing to establish and grow their line of hardbaits,” says Wheeler, who was welcomed into the dual sponsorship deal by none other than Rapala Manager of Field Promotions, Dan Quinn. After Rapala purchased a 49-percent stake in 13 Fishing last year, Quinn’s duties expanded to include managing the 13 Fishing Pro Team, in addition to his line-up of pros amongst the Rapala brands.

“Having worked with Jacob for more than 10 years, he has proven that he has taken his career and product knowledge to the next level and we couldn’t be more excited about having him grow and establish the 13 hardbaits line,” Quinn says. “He is certainly still with Rapala. This new role is really an extension of that, as the Rapala Family has grown to include 13 Fishing – they’re basically under the same roof now.”

“Wheeler is a great fit to represent 13 Fishing,” says James Coble, owner and president of DQC International Corp., which crafts the 13 brand. “He’s genuine and confident and his abilities speak for themselves, which lines up well with 13,” Coble says. “We’re looking forward to working with Jacob to design new hardbaits and helping him and our customers catch fish with them.”

For Wheeler, representing both 13 Fishing and Rapala is a best-of-both-worlds opportunity. “I get to fish all of Rapala’s legendary, tried-and-true baits that catch ‘em year in, year out wherever we go, but also get to push the envelope with a company that never hesitates to disrupt the industry by taking on challenges the way I often like to fish – on the fly, by the seat of my pants.”

The first 13 Fishing hardbait Wheeler will be slinging will be the innovative new Jabber Jaw, which combines a molded-plastic shallow-diving crankbait body with a one-of-a-kind “swing bill” – a free-swinging, vibrating metal lip like what comes on a bladed jig.

“I’m excited to release such a revolutionary crankbait to the market,” Wheeler says. “Fish have never seen, or heard, a crankbait like this.”

Below the Jabber Jaw’s nose, patent-pending metal jowls flank the articulation point of its swing bill. As the bait swims with erratic action and the bill vibrates, a unique, bite-triggering metal-on-metal clacking sound is broadcast to nearby bass.

“Those bass aren’t going to be able to resist that click-clacking and that action,” Wheeler says. “They’re going to be like, ‘I have got to check that out. Oh man, I have got to eat that! I truly believe it’s going to be a game-changer.”
The Jabber Jaw will swim to a maximum depth of four feet. It measures 2.3 inches and weighs a hefty 9/16th of an ounce. At that weight, Wheeler says, it casts a mile and can be easily roll-casted with tight precision to bass-holding targets.

Founded in 2012, 13 Fishing has evolved into a respected brand, generating more than $25 million in annual sales. DQC International brought on Rapala VMC last summer as 49-percent investor to help reach a growing global market. Rapala distributes existing and new 13 Fishing products outside the U.S. Wheeler’s deal marks a first for both 13 Fishing and Rapala.

“Wheeler has taken his career down a path that is far more than just catching fish,” Quinn says. “He’s a real powerhouse, with a very impactful presence, on all the social media fronts. He is a true asset on and off the water.”