Across the bass fishing universe, there is no more common piece of equipment stowed in rod lockers and strapped to casting decks than the baitcasting combo. Indeed, baitcasting gear is nearly synonymous with the pursuit of bass, due in large part to baitcasting tackle’s applicability to power fishing — characterized by long casts and ultra-fast retrieves — as well as its unmatched aptitude for extracting cantankerous fish from nearly impenetrable cover. As such, tackle manufacturers have directed considerable effort toward enhancing all of baitcasting gear’s strengths, producing reels with high gear ratios to support blazing fast retrieves, rods with the perfect balance of power and sensitivity, and lines that are tough-as-nails, yet easy to manage and cast.

Peer more keenly into those rod lockers and you’ll quickly identify equipment that would, at first glance, seem to be more at home in the hands of a walleye or panfish angler: spinning gear. While spinning tackle is perhaps not a front-line offensive weapon for many bass purists, there are specific presentations sprinkled throughout the fishing calendar that not only work with spinning gear, but are particularly well suited to the attributes that spinning rods and reels deliver to the tackle table. Moreover, seasoned professional anglers recognize that when the going gets tough, success often demands spinning gear.

Bassmaster Elite Series angler and Seaguar pro Chris Zaldain is a maestro of the spinning rod. Indeed, when an angler tucks five Bassmaster Classic appearances under their belt and finishes in the money over 70% of the time, you know that they’ve cracked the code for success not only when the fishing is good, but also when the bite is just plain tough. When power fishing sours and a paycheck is on the line, Zaldain pivots to the wizardry of the spinning rod, using it to cast bite-provoking spells that few bass can resist. Zaldain opened his spinning tackle playbook for us, providing an unmatched level of detail about how an experienced professional targets bass using spinning gear. 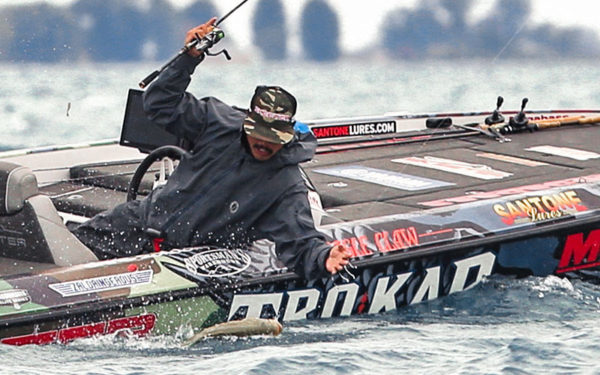 What’s so special about spinning gear?

“Spinning tackle is really the perfect complement to power fishing,” noted Zaldain. “If you’re good at fishing the banks but can’t connect on deep structure, or if you’re great with a frog but awful with a drop shot, then over the course of the season, you’re cutting your total number of bites in half. All bass anglers should aspire to becoming as proficient with a spinning rod as they are with traditional casting gear.”
What presentations make you turn to spinning tackle?

“Spinning gear is particularly well-suited to lighter baits,” continued Zaldain. “Of course, the first thing everyone thinks of when talking about spinning is the drop shot rig, but in fact, the spinning playbook is much deeper than that. I really like working a jerkbait with spinning gear. When I’m fishing smallmouth up north with tubes, I’m almost always working them with a spinning rod. The Mojo Rig, which is really a finesse version of the Carolina Rig, is best presented with spinning gear. My personal favorite, however, is casting small swimbaits, especially when the water is cold and clear and I need to get down deep for big bass.” Tell us more about your finesse swimbait approach.

“When a lot of bass anglers hear the word ‘swimbait,’ they think about supersized, trout-patterned lures that originated out west. No doubt, those big baits have caught a lot of monster bass. But when I fish swimbaits, I’m working on the opposite end of the size spectrum. My favorite is a 3” Spark Shad from Megabass, rigged on a ¼ oz ball head jig. There’s no effective way to cast such a light, compact bait on casting gear, but it absolutely shines with spinning tackle.”
What rod and reel do you recommend for fishing finesse swimbaits?

“A longer spinning rod, something just under 7 feet, is usually best. Not only is a long rod better for casting light lures, but it also lets me move a lot of line on the hookset, especially when a fish bites at the far end of the cast – and that happens a lot! When you’re choosing a rod, look for one that is lightweight and very sensitive; you want to be able to feel that swimbait deflect off cover as you retrieve it near the bottom and to determine if the bait has become fouled with a mussel shell or a piece of vegetation. A 2500 series spinning reel pairs well with a rod in this length range.” What role does line selection play in your swimbait presentation?

“My line and leader are mission-critical for swimbait success. In general terms, I spool up with 15-20 lb test Seaguar Smackdown in the high-visibility Flash Green color pattern, and then use an FG knot to link to an 18” leader of 8 lb test Seaguar Tatsu. When I’m fishing waters that are infested with Zebra mussels, or when there are lots of big fish around, I might step up to 10 lb test Tatsu, but 8 lb test is where I typically start.” Zaldain asserts that, “the ultra-thin diameter of Smackdown is essential. This line is incredibly thin – 15 lb test Smackdown has the same diameter as 4 lb test mono – so I can make super long casts. Moreover, once the bait is in the water and I start my retrieve, the line has minimal water resistance. That means my bait won’t get pulled toward the surface as I retrieve it; instead, it stays close to the bottom, right in the strike zone for big bass. And because I’m often fishing this way in 25-30-40 feet of water, keeping my bait deep is key for turning lookers into biters.” “A great example might be chasing fall smallies on an offshore rockpile. I might use my GPS mapping system to identify high-percentage areas, or I might simply troll around until I see deep fish on my sonar. Then, I’ll back way off that area and make a long cast – Smackdown lets me launch that 3” swimbait a country mile! Once the bait hits the water, I let it fall to the bottom with the bail open so that it goes straight down, rather than swinging like a pendulum back toward the boat. By watching the high-vis Flash Green line, it’s easy for me to tell when I’ve hit the bottom. Now, I close the bail, give the lure one little pop with the rod tip, and then begin a slow and steady retrieve back to the boat. I want to feel that lure deflect off cover every now and then during the retrieve, so I adjust my retrieve speed to get just the right rhythm of strike-provoking bounces and bumps. When a fish bites, I just lean into him to drive the hook home, confident that my Smackdown-Tatsu combination will deliver that fish to hand.”

Seaguar Smackdown is the braided line of choice for Bassmaster Elite pro Chris Zaldain, and you can leverage the same strength, smooth finish, and ultra-thin diameter of Smackdown to catch more and bigger fish anywhere you cast a bait this season. Look for Seaguar Smackdown to fill your spinning reels at your favorite retailer or by visiting Seaguar.com. Spool up with Smackdown this season and you’ll quickly realize that Seaguar is Always the Best