Shimano and G. Loomis Anglers’ Forecast for the Bassmaster Classic

Shimano and G. Loomis Anglers’ Forecast for the Bassmaster Classic

The attention of the bass fishing universe is focused squarely on Lake Ray Roberts in North Texas this week, as 54 professional anglers compete in the 2021 Academy Sports + Outdoors Bassmaster Classic presented by Huk. As Jeff “Gussy” Gustafson, Ed Loughran III, and Trevor McKinney dodge storms and snakes, tie knots, and devise plans to reach the pivotal final day of competition, they each opened their playbooks to provide us with their best guesses about how this year’s Classic will unfold. 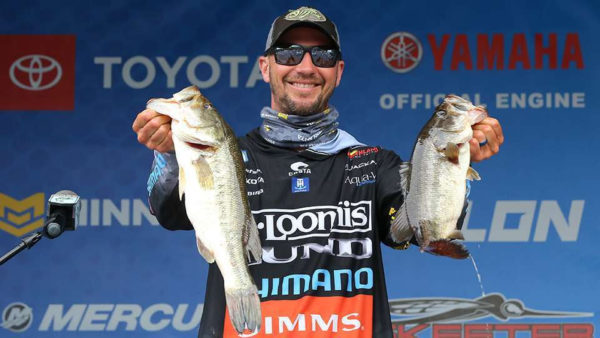 Gussy is riding the wave of success this year on the Bassmaster Elite Series, which crested with victory at the Tennessee River during a four-day smallmouth masterclass. Now preparing to fish his second Classic, the G. Loomis Pro faces many of the same uncertainties that all of this week’s competitors are learning to navigate. “At last year’s Classic, I took it all in, and was happy just to be in the mix – but this year, I’m working hard to find something special.”

“Lake Ray Roberts has never hosted a major B.A.S.S. event,” notes Gustafson, “and I’ve only been here once; I spent three days here last fall before the lake went off limits to take a look around. Ray Roberts isn’t necessarily known as a numbers lake, but it has some big bass. One way or another, this is going to be a heavy equipment derby.”

Gussy reflects, “once summer hits on a big southern impoundment, you’d typically expect the primary bite to be offshore – but that may not necessarily be the case at this year’s Classic. It has rained here for something like 25 of the past 30 days and the lake is two to three feet over normal pool. That high water is going to pull some fish into shallow brush and timber and put a lot more of the lake into play.”

“If I can unlock the offshore bite,” continues Gustafson, “I’ll be leaning on a football jig, presented with a G. Loomis NRX+ 903C MBR rigged with a Shimano Metanium with a 7.1:1 gear ratio. I’ll switch to a G. Loomis GLX 954C FPR for flipping to shallow wood.”

“Someone’s life is going to change this week, and I’ll be doing everything I can to put myself in position to hoist the hardware Sunday afternoon.”

Shimano Pro Ed Loughran III is a member of the 2021 rookie class at the Bassmaster Classic. Now competing in his third season of the Bassmaster Elite Series, Loughran expects a tight Classic with many anglers bunched up within a few pounds of each other.

“Like many of the other anglers, Lake Ray Roberts is brand new to me,” remarks Loughran. “I never made it down to pre-practice last year, so the official practice days represent my sole, very limited experience here. But having said that, practice has gone pretty well for me.”

“As anyone would tell you, the offshore, deep-water bite is the bread-and-butter of June fishing in the South, but based on what I’ve seen so far, I wouldn’t expect offshore fish to dominate this year’s Classic. With the lake holding much more water than normal, there are still plenty of fish in and near shallow cover where anglers can target them with very methodical presentations.”

Loughran notes that “this may turn into a one-rod tournament for me. Based on what I’ve seen in practice, I’ll probably be flipping the vast majority of the time with a 7’6” Heavy Shimano Expride (EX176HA), rigged with a Shimano Chronarch MGL and spooled with 65-pound-test PowerPro Super 8 Slick V2. I know of a few 7-pound bass that have been caught flipping during the practice period, and a couple fish like that would have a massive impact during the Classic.”

Collegiate angler Trevor McKinney is also competing in his first Bassmaster Classic, having earned a berth by winning the 2020 Carhartt College Classic Bracket. No stranger to success in competitive angling, McKinney speculates that Lake Ray Roberts will produce some giant bags this week. “I don’t think a lot of guys are going to have 50 or 60 fish days out there; five or six bites might constitute a good day, but those bites could easily go over 20 pounds.”

“I’ve never had a chance to fish Lake Ray Roberts before,” states the senior from McKendree University in Benton, Illinois, “but I have had some time on other big southern reservoirs. I’m really excited to be here and compete against some of the best bass anglers in the sport!”

“The shallow water bite is going to be important for me – and for a lot of other anglers out here. I’ll be flipping with a G. Loomis IMX-PRO 954C FPR paired with a Shimano Chronarch MGL with an 8.1:1 gear ratio. I like to catch up to the fish quickly when I’m flipping, and the high gear ratio of this Chronarch lets me do just that.”

Gustafson, Loughran III, and McKinney will be leveraging the power and precision of Shimano and G. Loomis products as they chase a spot in competitive bass fishing’s most prestigious history book. Shimano and G. Loomis salute the accomplishments that have brought each of them to this stage and look forward to following their progress up the leaderboard in the 2021 Bassmaster Classic.