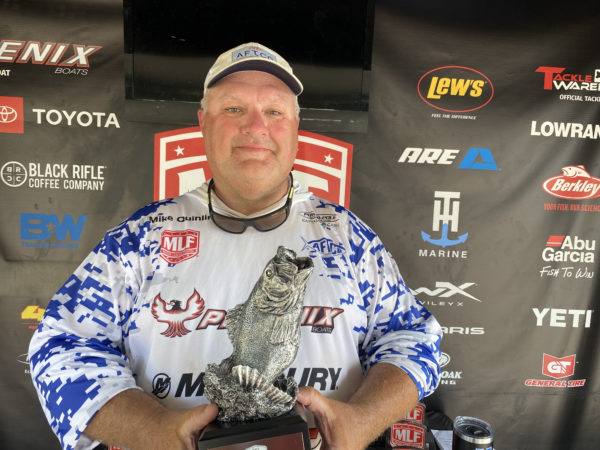 Quinlin’s victory was his second BFL Hoosier Division win in a row, as he won the BFL event on the Ohio River at Rocky Point on Aug. 6.

“Saturday, I caught all my fish shallow on a spinnerbait and had a 4-14 kicker, which is a pretty good fish for the Ohio River,” Quinlin said. “I only had four fish, but I was leading after Day 1.”

Quinlin said on Sunday he stayed close to takeoff and caught a quick limit that didn’t weigh very much, then made a 40-mile run and was able to cull out two more fish flipping a Hog Snatcher Baits tube.

“I probably didn’t even need to make that long run and still would have gotten the win,” Quinlin said. “The good old Ohio River changed on me, and the water went down a foot overnight. The fish would no longer chase a spinnerbait.”

With two straight wins behind him, Quinlin is now eyeing his next BFL event, the Regional Championship in La Crosse, Wisconsin.

“This feels great,” Quinlin said. “The Phoenix bonus was fantastic, as were the Mercury and General Tire and AFTCO bonuses. I’m looking forward to fishing the Regional Championship at the Mississippi River in La Crosse. That place is just full of fish.”

Ethan Hill of Columbus, Indiana, caught a bass weighing 5 pounds, 6 ounces – the heaviest of the event in the Boater Division – to earn the Berkley Big Bass Boater award of $780.

Jimmy Bean of Hamilton, Ohio, caught the largest bass in the Strike King Co-angler Division, a fish weighing in at 2 pounds, 7 ounces. The catch earned him the Berkley Big Bass Co-angler award of $390.