Michael Hood and Randy Wiggins Win the ABT on Wheeler Lake with 24.27 Michael Hood and Randy Wiggins Win the ABT on Wheeler Lake with 24.27

Decatur, Ala May 22— The Alabama Bass Trail North Division completed stop number four on Wheeler Lake. In recent years the lake has seen a huge rebound. In this event, many teams reported catching 70-100 fish throughout the day. With the return of the grass and the healthy bass population, Wheeler Lake is arguably one of, if not the best, lakes in Alabama. The team of Michael Hood and Randy Wiggins agree saying, “this is probably one of our favorite lakes right now, and to get this win against these guys, is a huge win we really wanted.” Michael Hood and Randy Wiggins 24.27 pounds finished first. “We had a terrible practice; we fished until 3:30 on two spots and only caught 4 fish. We started our day at the first spot on a grass mat not far from take-off,” an area also found by many other teams in the event. They spent some time fishing around in the area using “a Jack Hammer Chatter bait with a Strike King green pumpkin trailer” and catching a limit of 10-11 pounds around 7:00.” Because it was so crowded and the team realized they needed to upgrade those fish to have a chance, they moved to the second area they found in practice. This area is described as a “dirt shallow area.” The team positioned the boat in “1.9 – 2.0 feet of water and made casts up shallower where we believed the fish were still spawning. We made a cast and caught a 4.08 smallmouth and made another cast to catch a 5-pound largemouth- both fish barely had enough water over their backs, so it was so shallow. We believe the fish had just moved up on a hard spot.” Most of their quality fish were caught from 10:30 to 12:00 which is usually the worst time of the day to catch quality fish. They focused their time working the shallow area and caught 15 fish culling probably 15 pounds to reach the 24.27-pounds that won the money. With this win they collected $10,000 and punched their ticket to the ABT Championship on Lake Jordan in October. Jamie Smith and Michael Rains finished second place with 21.68. “In practice we found a little spot of fish but didn’t really know what was there. We ran straight to them this morning and got really lucky. We hadn’t seen a 5-pound fish in practice, but we caught two of them first thing. About 6:45 we had a limit and started culling from there.” The team spent the day in the Decatur Flats area just a mile or so from take-off catching fish near the river ledge. The fish they caught were post spawn fish that were making their way out to the river ledge. “We used a Freedom Tackle Chatterbait and a NetBait C-Mac 11 worm in plum apple along with American Bait Works Bait Fuel and believe it was the difference maker for us. We have fished the ABT from the beginning, and this is the third time we have finished second. We were sitting in 19th place in AOY before this event, so hopefully this will bump us up a little more to qualify to fish the BASS Team Championship. We are headed to our home, Lake Guntersville, for the next event and are really looking forward to that.” For second place, the team collected a $5,000 check. 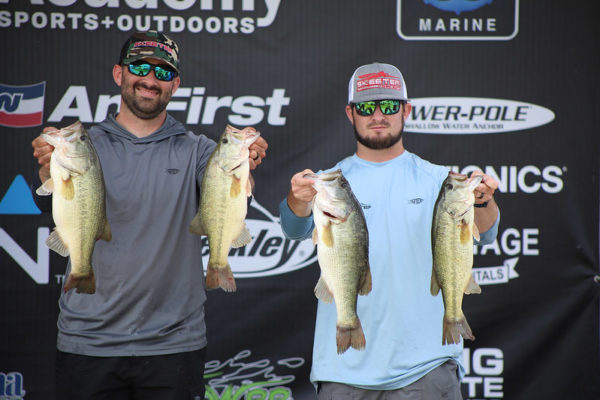 Tommy Reyer and Jeremy White finished in third place with 21.09. Their morning started on a spot they found late Friday afternoon in practice described by them as “a shell bed with milfoil grass surrounding it.” They began fishing the spot using a topwater but quickly realized that bait was not going to produce for them. After changing to go with a custom-made chatterbait they call “Daddy Hammer because a buddy’s daddy makes it for” them, they began to get some quality 3-pound fish catches. For the next two hours they caught fish every cast. Deciding about mid-day that they had really worked the spot over and possibly caught all the fish there, they decided to let that spot rest, so they headed down river to another spot. After sitting on the new spot about an hour, they caught one that weighed about 3-pounds. They thought about heading back to the original spot, but soon after they caught a 4-pound fish and decided to stay and continue to fish the area. About 2:00 they decided to slowly make the run back to weigh in to make sure to take good care of the fish they had. They caught about 100 fish off the first spot using baits that matched the blue gill bait fish. Those baits include a “Zoom Ol’ Monster in blue flake, a blue gill colored Senko- when we ran out of those, we use green pumpkin blue Senko and green pumpkin blue swirl Senko. We caught most of our better fish on the custom-made chatter bait in bluegill with a Strike King Menace trailer.” The team collected a $4,000 pay day for their finish. 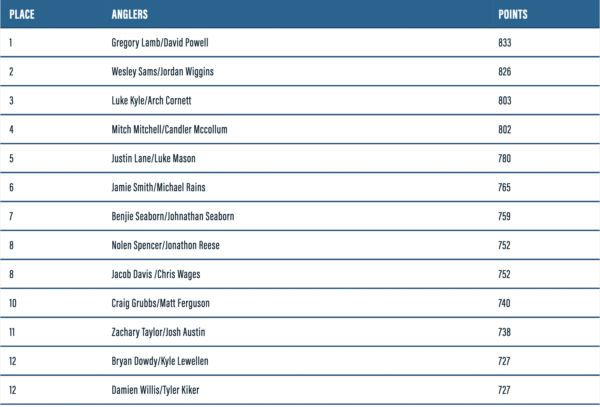 The Top 10 places are below for a complete list of standings visit: https://www.alabamabasstrail.org/wheeler-lake/results/ There is one more event in the regular season and one more chance to qualify for the ABT Championship and the BASS Team Championship as well as the coveted title of Angler of the year. Listed below are the top 12 in AOY after 4 events:

Download and listen to the ABT Podcast on your favorite Podcast app by searching for “Alabama Bass Trail Podcast.” The podcast is released each week on Tuesday, and this week will feature the winners form Wheeler Lake.