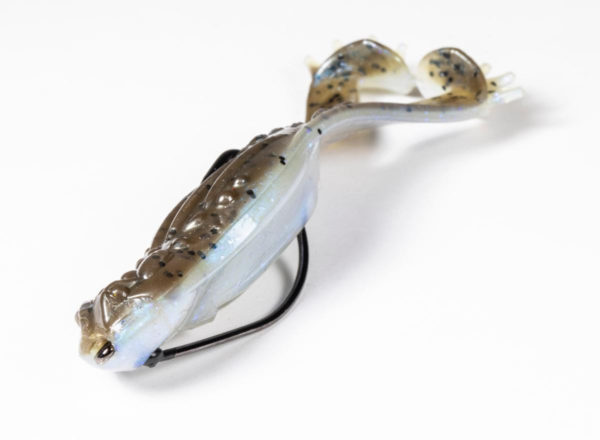 Bass Bait of the People

Ladson, SC (March 1, 2022) – Set aside the snark and the time wasters posing as social media pundits and you’re left with actual people—real-world folks driven by positivity, possibility and edifying ideas. Anglers, perhaps more than most, prefer to cheer their friends’ accomplishments and pass along cool new ways to simply have fun and catch more fish.

Among Z-Man’s faithful social media friends—nearly half a million strong—the entire design process has proven to be a fun, engaging exercise, and a rare peek behind the bait-crafting curtain. Judging by fan reaction, excitement for that first surface explosion has reached a crescendo.

“Can’t wait to see what this bait looks like in the water!” remarked dozens of fans on Z-Man’s Facebook page.

“If the GOAT ToadZ is as tough as their other ElaZtech stuff, a single bait might last me all year!” wrote another fan.

“Loved watching and participating in the design process,” noted Jerry Hargis and several others. “Watching how this bait came to life has been amazing!”

“This was fun! Thx for sharing the whole process!! Can’t wait to fish it!!!” said Steve Smith.

Z-Man’s Nussbaum, who spearheaded the GOAT ToadZ project, offered perspective on the bait’s unique evolution— from egg to tadpole to a fully-developed surface-kicking amphibian. “Typically, when a new product is released to the public, the first time you see or hear about it is the day you discover the bait hanging from the tackleshop aisle,” notes Nussbaum. “Or, if you’re lucky, you might hear about it through the grapevine, as the bait’s being developed.

“We wanted to turn traditional bait design on its head by allowing our fishing friends to virtually step into Z-Man laboratories and both watch and actively engage in the process,” he offered. “It’s been a fascinating, super rewarding exercise. We and our fans think the final version of this new ElaZtech surface bait is pretty exceptional.”

Among all the unique properties of ElaZtech, explains Nussbaum, the material’s buoyancy proved to be a perfect match for surface-fishing. “One of Z-Man’s most popular baits has been our Hard Leg FrogZ™. It’s been thirteen years since we released that bait—certainly among the most durable topwater toads ever built. Admittedly, anglers today have a lot of toads to choose from. But none of them offer all the advantages of ElaZtech. And we knew we could build a new design from scratch and give anglers something truly special—lively, versatile and incredibly durable on the hook.”

The GOAT ToadZ offers buoyancy and versatility in abundance, pairing perfectly with weighted or unweighted frog hooks or as a buzzbait trailer.

“Another difference-making feature of the GOAT ToadZ is its head and throat section,” adds Nussbaum. “The bait’s 10X Tough ElaZtech composition means the head and other parts of the body resist tearing. Even after multiple battles with bass through thick cover, that hook won’t rip through the throat. That’s a common problem among most toad baits, which get destroyed pretty fast. Hook and re-rig the ToadZ over and over again. Still good as new.”

Beyond buoyancy, resilience and other amphibious features like warts and eyeballs, the ToadZ’ central attribute is its customized kicker legs. “This was one of the most evolved elements of the bait,” notes Nussbaum. “With help and suggestions from our fans, we tweaked and improved our kicker legs at least a half dozen times. Fan engagement helped us land on a specific configuration that gurgles in the water and produces a fish-attracting bubble trail.”

Nussbaum further explains how early leg versions offered too little water resistance, which required thinning and angle alterations to properly churn, gurgle and propel the bait forward at any speed. “Along with fan interaction, we also integrated our customized cupped kicker tail design from the original GOAT™ bait to maximize mobility and flow at slow, medium or fast retrieve speeds. “That’s another key differentiator between the GOAT ToadZ and similar baits. No need to retrieve this bait fast to keep it up on top—unless you want. Go ahead and work it as slow as you like, or even stop and twitch the bait in place. It’s going to stay on the surface, period. We think that’s a pretty big deal.”

“This is probably going to become the best frog ever,” wrote Danton Lee. “It doesn’t take on water, it floats and it’s super tough but flexible. Z-Man does it again.”