Columbiana, Ala ‑May 15: The fourth stop of the Alabama Bass Trail South Division was held on Lay Lake. During practice leading up to the event teams reported a post spawn pattern that was causing the lake to fish a little tough. Teams were hoping the early morning shad spawn would produce a few big bites. Lay Lake is known for quality spotted and largemouth bass. 225 teams fished for a $10,000 first place price and $37,400 for the remaining 40 places. The team of Chris Rutland and Coby Carden are a well-known team on Lay Lake. They drew boat number 100 putting them about middle of the pack at blast off. The team had about 5 spots they wanted to start on. They ran past two of those spots with other competitors on them and stopped at the third spot to begin their day. They caught a limit there in about 30 minutes using a Spro Bronzeye frog in a brim color. Then they decided to move to their second spot while the shad spawn was still going on. They caught two really good ones on the second stop- probably the same ones they found in practice and checked on a few times during the week to make sure they were still there. Coby shared, “the lake is not fishing like it normally does with the shad spawn. It’s fishing really tough; I’m not sure exactly what is going on, but the fish just aren’t really up there.” A big plan for them was “not to get spun out this morning if the shad spawn wasn’t there. We knew if they weren’t there, we would move through some of our other spots and hit enough places during the day. Eventually, we could put ourselves in contention to get some bites.” The team spent the afternoon targeting brim beds using a Big Bite Baits YoMama in the Hematoma color. They culled up to 19.25 pounds and a $10,000 pay day. 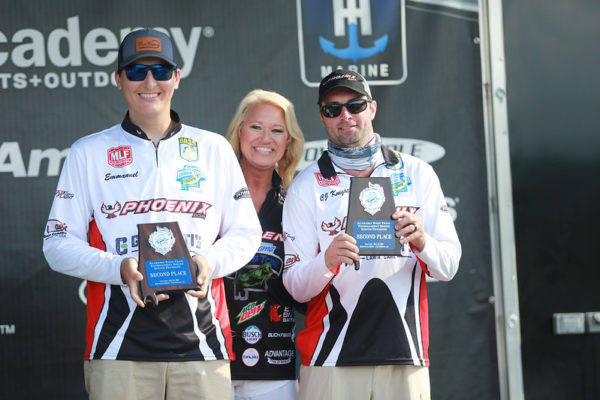 The team of Emmanuel Globetti and CJ Knight drew boat number 225, the last boat to blast off in the field. They didn’t let the low boat draw get to them saying, “your boat number is your boat number. We couldn’t let that affect our day. We had a slow morning only catching two fish in the first hour and a half. When we got to our first spot, there were some teams in the area, but they weren’t exactly where we wanted to fish. We started to just run water and fish and stumbled on a limit fishing that way. About mid-morning we dialed in a better pattern after running place to place getting a better bite until 3 o’clock. We feel like the key for us was the sun coming out and positioning the fish. We caught them on boat docks, lay downs, offshore brush piles and doing a little bit of everything today.” The wind was also key for them today along with the sun. “We used the wind and the sun to position the boat so we could make the cast to not spook the fish.” They weighed in 17.38 pounds and claimed a 2nd place check for $5000 The Team of Noah Godwin and Cole Godwin finished third with 16.21 pounds. “We started out in a creek where we found a shad spawn. The creek had a shad spawn on one side and brim beds on the other side. In practice the shad spawn seemed to last about 10 minutes first thing in the morning, and when we got there today, we probably just missed it. We hoped to catch some good ones in there, but it just didn’t happen. We caught one about 2-pounds and fished around in that area with a Chatterbait. We caught 20-30 fish but could only cull up to about 8-pounds. We decided to make a move about 1:00, and we caught 2, 4 and 6 pound fish in the last hour of fishing. We caught the big ones on a Big Bite Baits Trick Stick on a 3/8 oz Crusher Lures tungsten weight.” The team collected $4,000 with this finish. The Top 10 places are below for a complete list of standings visit: https://www.alabamabasstrail.org/lay-lake/results/ The Angler of the Year points race is also taking shape for teams looking to qualify for the BASS Team Championship and ABT Championship. There is only one more event remaining. The top 12 teams in AOY are listed below in a very tight race to the finish on Lake Eufaula June 18th.

Download and listen to the ABT Podcast on your favorite Podcast app by searching for “Alabama Bass Trail Podcast.” The podcast is released each week on Tuesday and this week will feature the winners form Lay Lake.