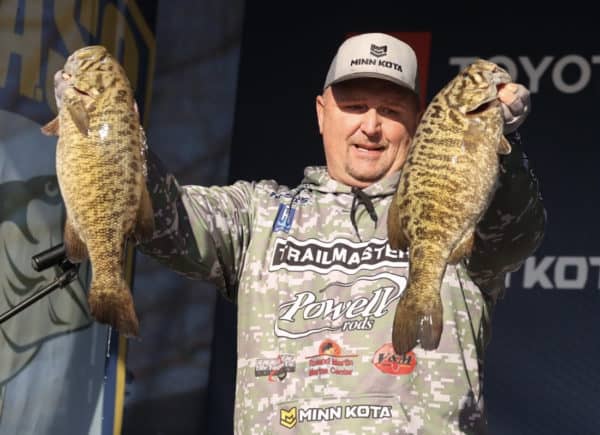 Koby Kreiger, of Alva, Fla., is leading after Day 1 of the 2021 Guaranteed Rate Bassmaster Elite at Pickwick Lake with 25 pounds, 12 ounces. Photo by Seigo Saito/B.A.S.S.

FLORENCE, Ala. — A strong start plus a strong finish was the formula for Koby Kreiger to lead Day 1 of the Guaranteed Rate Bassmaster Elite at Pickwick Lake. The veteran pro from Alva, Fla., caught a five-bass limit that weighed 25 pounds, 12 ounces. “I caught a 6-6 pretty early this morning on a balsa Wee Bait in the silver shad color and I kept that bait in my hand until I caught my limit,” Kreiger said. “It took me a little while to do it, but I got zeroed in on some stuff.”

“The current seams may be 5 feet off the bank today and tomorrow, they may be 20 feet off the bank,” he said. “I don’t like for the water to be too muddy because I’m throwing little bitty baits, so I want them to be able to see it.”

Around 2 o’clock, Kreiger relocated to a different part of the lake. He kept his cards low on the particulars, but he noted that the changing conditions likely triggered an opportunity. “I just went and tried something that hadn’t worked at all in practice, but it worked today,” he said.

“My first limit weighed 19 or 20 pounds and then I told my marshal ‘I need to go catch some big ones.’ I caught two big ones late and jumped another one off. I had a couple more chances to maybe have an even bigger bag, but it was a great start to the tournament.”

After the event’s start was postponed twice by extreme current levels caused by Wednesday’s fierce storm system, plus hazardous wind advisories, Saturday’s warm, sunny conditions starkly contrasted Thursday and Friday’s gloomy chill. Kreiger said brighter conditions helped position his fish. With his final limit comprising largemouth and smallmouth, Kreiger said he caught both species in both of his areas. Even though his first big bass was a smallmouth, that bite improved as the day progressed.

“Earlier this morning it was cloudy and I don’t think they could see stuff as well,” he said. “But when the sun came out, those smallmouth like sun a lot better and it brings them up off the bottom better. “I’m catching smallmouth on the same stretches of bank where I’m catching largemouth. It’s just completely random.”

Looking ahead to Sunday’s competition, Kreiger said: “I’m going to start doing that tomorrow. But who knows? I may not catch anything. It’s changing every day, so you never know what’s going to happen. They may sack ’em up down the lake. I’m happy to have what I have, for sure.”

Buddy Gross of Chickamauga, Ga., is in second place with 23-3. He committed his day to offshore gravel bars he had marked in practice. Spots located close to spawning areas were most promising, but he had to cover a lot of water before locating the right one.

“I hit 14 spots to find one that had them on it,” Gross said. “So at some point, I might have to go to places I’ve never been just to find another one if that one doesn’t keep producing. All the places I fished today were completely dry during practice. “I did that on purpose, anticipating the water coming up. I rode around and marked every gravel bar that I thought would have an eddy behind it.”

Gross caught his bass on a mix of red crankbaits and a 3/4-ounce chartreuse spinnerbait with a chartreuse willow-leaf blade and a red Colorado blade. The brilliant colors, he said, were essential in the turbid water. Bill Lowen of Brookville, Ind., is in third place with 21-3. Stressing that his day was not easy, the highly experienced river fisherman said the key was not sweating the changing conditions.

“When we get high, muddy water, I think it gets in a lot of guys’ heads; but to me, this is clean,” Lowen said. “Where I grew up on the Ohio River, when it floods, it turns to chocolate milk. So to me, this was just another day.”

Lowen caught his bass by targeting current breaks close to spawning areas.m “It’s hard to find those types of spots, but every time I found one today, I caught a big fish,” he said. “I caught them on stuff today where I hadn’t made a cast in practice because it was dry.” Clark Wendlandt of Leander, Texas, is in the lead for Phoenix Boats Big Bass honors with his 7-6.

Sunday’s takeoff is scheduled for 6:45 a.m. CT at McFarland Park. The weigh-in will be held at the park at 3 p.m.

After Sunday’s round, only the Top 50 anglers will advance to Monday’s semifinal round. The Top 10 will advance to Championship Tuesday with a chance at the $100,000 first-place prize. Live coverage of the event can be streamed on Bassmaster.com and the FOX Sports digital platforms. FS1 will also broadcast the action live starting at 7 a.m.