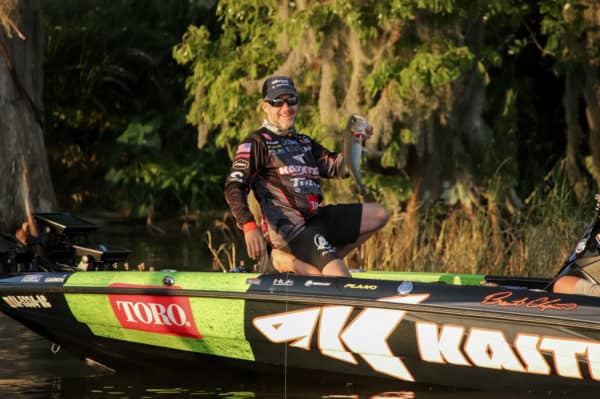 Final 10 Anglers Set for Championship Wednesday and Final-Day Shootout for $100,000

LEESBURG, Fla. (May 25, 2021) – Toro pro Brent Chapman of Lake Quivira, Kansas, caught 23 bass weighing 51 pounds, 12 ounces Tuesday to win the Knockout Round and advance to the final-day Championship Round at the Major League Fishing (MLF) Bass Pro Tour Favorite Fishing Stage Three Presented by Bass Cat Boats at the Harris Chain of Lakes in Leesburg, Florida. The field has now been cut to the final 10 anglers, and competition will resume Wednesday morning with the anglers departing Leesburg’s Venetian Gardens Ski Beach at 6:30 a.m.

The six-day tournament, hosted by Lake County, featured 80 of the top professional anglers from around the world competing for a purse of $805,000, including a top cash prize of $100,000 to the winner.

The top eight pros from Tuesday’s Knockout Round that will compete in Wednesday’s Championship Round on the Harris Chain of Lakes are:

“I knew it was going to be a special day for me when we had our 30-minute morning ride-around before lines in at 7 (a.m.),” Chapman said in his post-day interview. “The area where I wanted to sit down and start was an area that I had finished my day in on Sunday. When I pulled in there, there were birds everywhere feeding along the shoreline. There was a shad spawn going on, and when you see that many birds along the shore there are probably just as many bass under the water that you can’t see. It killed me to sit there and have to wait 20 minutes for lines in.

“Once we got going, it got going pretty quick,” Chapman continued. “But, the thing that was really crazy is that the birds dissipated pretty quickly and within 30 minutes the fishing went from really, really good to quite a bit tougher. It was interesting. You can learn a lot from the birds and I’m definitely going to be looking for as many more as I can possibly find tomorrow.”

Chapman said that he caught his fish Tuesday on just two key baits.

“Just like I’ve been doing all season, I’m fishing my strengths and sticking with the simple stuff,” the Kansas pro said. “I’m fishing a bladed jig – nothing fancy – just a shad color with chartreuse and white. And I’m throwing a big jig – 1-ounce – with a big chunk. When a good one bites, I want the upper hand so there is no sense in using anything lighter.

“Tomorrow, for me, is basically going to be that 1-2 punch,” Chapman went on to say. “I’ll have a couple of different colors of bladed jigs tied on and I’ll be flipping that big jig, and we’re going to go out and swing for the fences and see if we can’t bring home that big red trophy. It’s been a fantastic week. I just need it all to come together for me just one more day.”

The 40 Anglers in Group A competed in their two-day qualifying round on Friday and Sunday – the 40 anglers in Group B on Saturday and Monday. After the two-day Qualifying Round, the anglers that finished in 2nd through 20th place from both groups advanced to Tuesday’s Knockout Round, while the winner from each group advanced directly to Wednesday’s Championship Round. In the Knockout Round, the weights were zeroed and the remaining 38 anglers competed to finish in the top 8 to advance to the Championship Round. Tomorrow, in the final day Championship Round, weights are zeroed and the highest one-day total wins. Full breakdown of the format can be found at MajorLeagueFishing.com.

The final 10 anglers will take off from the Venetian Gardens Ski Beach Boat Ramp, located at 201 E. Lake Harris Drive, in Leesburg, at 6:30 a.m. ET Wednesday. The General Tire Takeout and Championship Moment will also be held at the Ski Beach at the Venetian Gardens, beginning at 3:30 p.m. Fans are welcome to attend, but encouraged to follow the event online throughout the day on the MLF NOW!® live stream and SCORETRACKER® coverage at MajorLeagueFishing.com.

The MLF NOW!® broadcast team of Chad McKee, Marty Stone and J.T. Kenney will break down the extended action from the final day of competition on Wednesday from 6:45 a.m. to 3:30 p.m. CT. MLF NOW!® will be live streamed on MajorLeagueFishing.com and the MyOutdoorTV (MOTV) app.