Insider Report: Dewey does it again, leads day one in Marinette 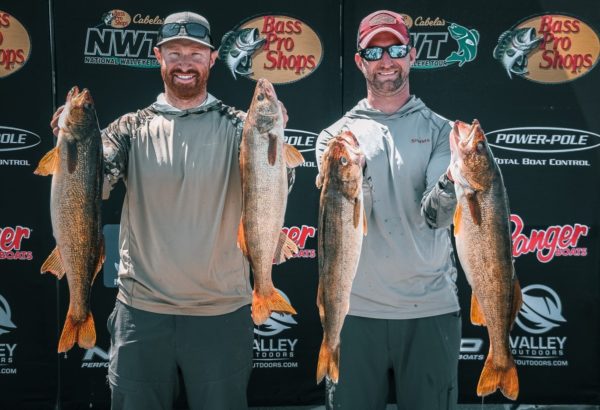 MARINETTE, Wis. – When Duane “Dewey” Hjelm won the 2017 National Walleye Tour event presented by Bass Pro Shops and Cabela’s on Lake Sakakawea, he proved his mettle on the Missouri River system. While he’s registered several solid tournaments since, his recent string of success demonstrates another level of versatility. In early June, Hjelm took second on pools 9, 10 and 11 of the Mississippi River out of Prairie du Chien, Wis. Back in Wisconsin this week, he’s moved up to the top spot after day one on the more expansive Green Bay.

Two weeks ago, Hjelm married his longtime girlfriend. Along with his mom and dad, the three have recently formed an informal support trio that has allowed Hjelm to relax as he battles the mental side of high stakes tournament fishing. If his hot streak continues, this might have to become a permanent arrangement.

Hjelm said he received eight or nine bites today, which is impressive considering the difficult conditions. He started quickly and ultimately finished his day early. His five weigh fish registered 31.68 pounds, giving him roughly a pound and a half lead over second place pro Korey Sprengel.

“It’s been tough,” said the Pierre, S.D., native. “There’s tons and tons of bait around. The alewives are thick, so thick in some places you can almost walk across the dead ones. There’s bug hatches and tons of gobies too. Your presentation has to be nearly perfect for them to eat. Right now, they can pretty much swim around with their mouth open and get an easy meal.”

During practice, two- and three-fish days were the norm.

“It was so tough at times it was hard to keep your focus, hard to keep your head in it. In that type of bite, tons of thoughts go into your head. I do think the bite is getting better though. In another two or three weeks this place will be on fire.”

“I stayed close. It was a combination of being the best spot in practice, but me also knowing how quickly this place can turn. By staying close today, I was able to maximize fishing time. There hasn’t been much traffic around me either. During practice, I was starting to think I was in the wrong area.”

Hjelm’s preferred technique is casting. He said he has both a casting and trolling pattern going this week.

“Trolling is definitely working, and I feel like I’m around the right fish to win it. But there’s lots of areas in this lake where you can be around the right fish. Right now, it’s more about how active they are. Overall, I’m hopeful and optimistic. In this area, we don’t catch many small ones. With how tough the bite has been, I won’t gamble and throw back a 4-pounder tomorrow, especially early.”

After registering his weight today, Hjelm has unofficially punched his ticket to the 2022 National Walleye Tour Championship. He’s also in serious contention for the Lucas Oil Angler of the Year award. He started the event fourth in the standings, 20 points behind Kevin McQuoid.

“Angler of the Year is possible, and it’s a goal of mine, but I’m just taking it one day at a time, and then one tournament at a time. It can be hard to duplicate weights on Green Bay, so I know I have my work cut out for me.”

The 2022 tournament season has been steady, yet unspectacular for Sprengel, arguably the sport’s most accomplished walleye angler. Like Hjelm, he’s still in contention for Angler of the Year as he currently sits seventh in the points. Today, the Berkley pro seemingly took his foot off the gas, yet still sits second with 30.14 pounds.

“I only caught five fish today, but that’s OK,” said Sprengel. “I played it somewhat safe. I didn’t want to risk too much and swing too much. You can’t win the tournament on the first day. I’m just super happy nobody came in and weighed 40 pounds.”

Sprengel knows plenty about winning big tournaments. In addition to capturing the 2014 NWT Championship, Sprengel dominated the 2020 and 2013 NWT events on Green Bay. It’s not only his home fishery, it’s his home pond with history. For example, he won the 2020 event by over 17 pounds.

“I was more nervous for this one,” said the Beaver Dam, Wis., pro. “I almost felt it was mine to screw up. I evaluated the situation and made sure I didn’t mess it up on day one. Sometimes I need a reality check. I have to remind myself I don’t need to have 40 pounds.”

Sprengel was somewhat tight-lipped about his location and presentation. All he would allow is that he’s structure fishing with crawler harnesses and purposely targeting larger fish. The area he chose today was part of the safe play.

“Practice was tough, but not impossible. I can catch them. I sort of like these tougher tournaments because it represents a real opportunity to separate yourself.”

Sprengel’s next decision is whether or not to swing tomorrow. After all, playing it safe currently has him second.

“If I play it safe and come in with another 30 pounds, I’ll probably be in the top three and maybe have a chance at winning. But if I swing, I can eliminate a lot of questions and just slam the door. I do have a longer day tomorrow, and it’s supposed to be a bit calmer.”

Like Hjelm, Blackfish pro Max Wilson was in contention at the prior NWT event on the Mississippi River. The 2018 NWT Championship winner is once again in the hunt after catching a 29.47-pound stringer.

“I went out today knowing there was no in between,” said Wilson, who finished 8th in a team tournament on Green Bay last weekend. “It was either going to be great, or it was going to be terrible. I could’ve gone and played the numbers game, especially with AOY on the line, but I didn’t.”

Wilson said he caught only four fish all week in practice. He caught six today, but none of them came where he practiced.

“I just knew about this spot; I knew what caliber was there. I left the crowds and went there today because it was my best chance. It was nerve wracking coming into this.”

Wilson explained that the number of walleyes in his area is impressive, but getting them to bite is a chore.

“Where I’m fishing, it’s a five-bite-a-day deal. It’s all-out war. It is just so hard to get them to bite.”

With one fish in the box, Wilson’s plan was to abort at 11 if they didn’t catch another. No. 2 came in at 10:52, and the rest of the day followed suit. For the second half of the day, Wilson had to fish with his outboard running as the voltage on his starting batteries was running low.

“We just grinded it out and found a way to make it work. I’m mainly pitching at individual fish, and I have a one-two punch. We caught four fish off one bait today and two fish off the other. Today we both trolled and jigged.”

With seasoned sticks ahead of him, Wilson knows he’ll have to repeat today’s performance to reenter the winner’s circle.

“Sprengel is the GOAT on this system, but I’m not worried about him or what he’s catching. I have to worry about myself. Quite simply, I have to back it up.”

Rounding out the top five are pros Drake Herd and Austin Ragotzkie. Herd, the reigning Angler of the Year from Alexandria, Minn., caught a limit weighing 28.18 pounds for fourth place.

Ragotzkie, the fisherman from Edgerton, Wis., sits fifth with 27.01 pounds.

Rounding out the top 10 pros after day one on Green Bay: