Are we having fun yet? I am loving it and here we are ready to go with Part IV. I have reached out to some friends of mine, muskie fishing Legends in their own right, for their input for Hotspots in their area of expertise. From the pen of Capt. Larry Jones comes details of one of the most prolific Hotspots for giant muskies, especially in the 1990’s located in western  NEW York State: Niagara River/Buffalo Harbor

“In the early 90’s the Niagara River was one of the premier go to muskie fisheries for a chance at a 50″ muskie. Many 48″to 55 1/2″ were caught here every spring and fall. In the spring big muskies were off the spawning beds on structure &amp; channel edges, usually if water temp was still 60 degrees or under. In the fall Bethlehem Steel Coke Ovens discharged warm water attracting gizzard shad and spurring Great Lakes Spotted Muskies to feed. Multiple numbers of muskies were caught and many 50+ inches and some over 40+ pounds .This brought fishermen here from all over the U.S.A &amp; Canada and it got fished hard.

“Then the Coke Ovens shutdown and no more warm water discharge. It changed how gizzard shad arrived along with fatty muskies. Around the same time the Great Lakes were hit with VHS disease and this took numbers away from the population of muskies as well. But we still catch some of the fattest girth muskies found anywhere, just many more hours per fish.

“Now you have to depend on many water temperature changing variables to have the right conditions to catch these fatties. Night cold weather cooling Lake Erie surface water temperature, then prevailing West or SW winds pushing the cold water to the Harbor, bringing baitfish and feeding muskies. Then if the winds go East or Northeast, this cold water gets pushed away and the Niagara River pulls from the bottom of Lake Erie the warmer water and as fast as everything showed up, it is gone. “Another good chance for action is when Lake Erie is mad and slapping waves over Buffalo Harbor walls, dirty water outside and green tint behind walls, everything moves in. Best action are the years when Lake Erie is under 45 degrees but the Harbor is slightly warmer, hang on for fatties. Trouble is with warming weather patterns this does not happen every year anymore. We do not have the catch rates of the late 90’s,but you will not find fatter girth muskies averaging 26″ to 28″ in most other waters. So, the Harbor does not get much pressure these days, but there are a few of us diehard locals that quietly enjoy our fatties when they come.” Capt. Larry with one of many Giants in his boat.

We thank Captain Larry Jones for this contribution. He has been Muskie hunting the Niagara River and Lake Erie for more than 30 years. Each year many trophy Muskies from 48 to 53 inches enter his boat and are released. The fall of 1997 he boated two muskies over 53 inches in length and 27 inches in girth. This happened in one hour! The following day he boated a 53 ½ X 28 ¼ dandy. In 1996, the Capt. caught and released 112 muskies personally to win the Muskie’s, Inc. Masters Division Championship. Clients added another 79 to his boat’s year total!

The Captain holds a U.S. Coast Guard Masters License and his boat is Coast Guard inspected every year and is fully equipped. I think it appropriate that this next Hotspot be included, (and probably should have been in Part II) as Lake Chautauqua, New York is one of the oldest historical muskie angling fisheries known and is home to the first viable muskie hatchery in the world, the Bemus Point Hatchery. An interesting lake, but not unusually large at 13,156 acres with two distinct basins; the north with a maximum depth of 75 feet and a shallower south basin around 20 maximum depth. It has put out many thousands of muskies including some giants. An interesting sidebar to the Lake Chautauqua story is the fact that when the Québec fishery folks needed muskies to restock the Ottawa River after the masquinongy population had been decimated from logging and dam building by the mid 1900’s, they got and stocked the Chautauqua Lake strain muskies from the New York 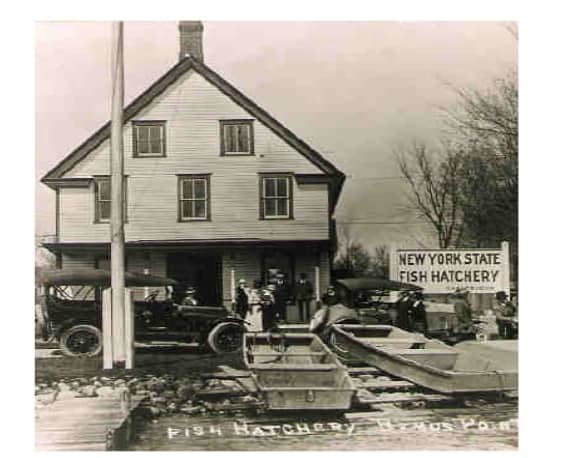 DEC! And of course, most knowledgeable muskie anglers of today know what a huge success that was as those genetics, when turned loose in much larger waters than Lake Chautauqua, grew to mammoth proportions…especially in the length category. Those genes are still important in that fishery today.

From Howard Levy’s 1962 book “Man Against Musky” I found an interesting story that triggered a thought in my mind that sometimes, the “Hotspot” can be a Person, rather than an area or stationery piece of structure! The reason for this thought is, as borne out in Levy’s book, that often this is the case where the fishing is done mostly by trolling, as was done back then on Lake Chautauqua, one Person’s catches far exceed those of the masses for both size and numbers. We probably all know someone like this on other waters and this story supports my theory. 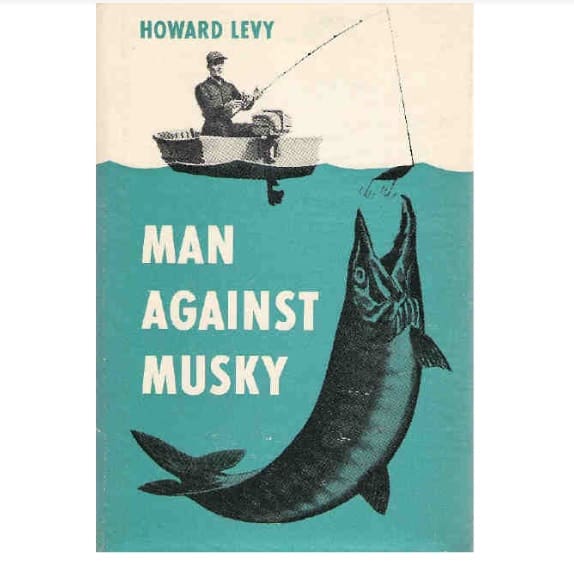 …”In every section of the country there is a legendary figure”…”Up in the Chautauqua Lake region, we fishermen also had such a figure, but this man was a real live person, though none the less legendary. His name was Dewey Baldensperger and he was from Warren, Pennsylvania. For several years, Bob Helfrich and I had heard reports about the fabulous catches made by this man. The tales grew and grew with the telling, and I, for one, was prone to take them with a pinch of the proverbial sodium chloride. I had never seen him and didn’t know where he lived or anything else about him, except that he was supposed to be the prime muskellunge fisherman on Lake Chautauqua.

“One hot clear afternoon, Bob and I had tired of casting”…”Bob stared awhile, then pointed to a small mahogany inboard boat some 500 feet ahead of us.”…”’I think that’s Dewey Baldensperger.’”…”Bob had recognized, not the man, but the inboard boat in which he was trolling.

“We followed this boat, staying a comfortable and, we thought, inconspicuous distance in the rear. And in the hour that we followed him we saw that man hook, fight, and land and release SEVEN MUSKELLUNGE!

“About that time, I couldn’t take it any longer”…”I told Bob I’d see him later, and I started on a hunt for this man Dewey.”… …” I walked down the steps, came to a neat white cottage, walked around the front to a large open porch, and saw a man sitting on a straight kitchen chair”…”his hands held a s set of long, powerful binoculars”…”

…” ‘Are you Mister Baldensperger?’”… …”’Yep,’ said the man, never taking his eyes off the binoculars, never moving a muscle.

“’We followed you today and watched you catch and release seven muskies,’ I offered. He never moved, just waited a minute, and said, ‘You were the fellows in the white outboard,’ to which I agreed. “’You sure don’t know much about fishing,’ were his next words to which I also agreed.”…

…”I asked Dewey what he was so intently watching, and he told me that his wife and son were out there trolling. I was amazed to learn that one or another of the Baldensperger family was on the lake during every daylight hour, from dawn ‘till dark!… …”This was an important point to me. This indicated to me that he had found out, or was endeavoring to find out, just what hours the fish would start feeding, possibly in an attempt to correlate this set of facts with the weather, temperature, or some other factor.

“’That last fish I caught today was number 157 for the year so far,’ was the next astounding fact that came from his mouth. And while I tried to make haste slowly, I could not resist from asking him the sixty-four-thousand-dollar question—‘How do you do it?’… …”I never did find out.’… …”And when Dewey Baldensperger started to think like a musky, he began catching fish. Small one, big ones, quantities of them. On several occasions he caught the year’s record fish from the lake, and I recall one year when he placed in the honored top ten of the Field&amp; Stream contest, which is quite a feat for Chautauqua Lake. I think 42 pounds was the largest he ever landed…”

“I only saw Dewey Baldensperger once again before he suffered a severe stroke and passed away. This meeting was on the last day of the season, October 15, 1950”…”I shouted greetings and asked him how the fishing had been. ‘Drop over to my cottage and see what’s on the shore,’ was his only remark.”…”there, out front along the shoreline, was a sight for sore eyes and for aching hearts. There was the catch that Dewey had made that day while fishing with some friends from Buffalo: THREE ‘LUNGE THAT WEIGHED A TOTAL OF 101 POUNDS, a record, I believe that would stand the test, of time, anywhere in the United States or Canada, for one day’s catch.” Pre 1907 reference-could have been-not verified … From an undated article from my archives comes a story about a big muskie. It appeared in a Buffalo, NY newspaper written by Bob Feeney and was entitled Is 60-Pound Chautauqua Muskie a Hoax? …A 60-pound muskie was gaffed into a boat by “a crippled angler eons ago” on Chautauqua Lake, as being shown these days on a seemingly authentic picture-postcard in Hogan’s Hut in Lakewood. Roland Vaillancourt and Mrs. Elsie Hogan insist: “It’s not a fake; it actually was taken on this lake… While I cannot verify that the above referenced muskie was indeed 60-pounds the caption on said postcard (I have two different versions in my collection) says “Sixty lb. Chautauqua Lake, N.Y. Muscallonge”. One of my postcards had a postmark date of 1907 on it so the fish would have to have been caught prior to that. It certainly does look big in the photograph and could have possibly weighed 60 pounds!

1915 legend-not verified … In July of 1937 a Detroit, Michigan man received a color postcard from New York with the following message. Bert: I just came from town and happened to see this card (the 75 lb. ‘lunge) caught 22 years ago. You doubted me as did Field and Stream so am sending one to them too. Yours for bigger and better fish. Helen A genuinely nice fish and an excellent photo for that time, but 75 pounds? You be the judge. This fish was also caught from Lake Chautauqua, N.Y.

I am sure that there are many other Hotspots that I am not aware of even though I have fished muskies in 23 states and 2 provinces of Canada over the past 65 years. Any reader who knows of one or more Legendary or famous Hotspots, please let me know with a write-up of same and supporting photos if available and I will include them in a follow-up article(s). Send it to me at: [email protected] Thank you!