Throughout the history of organized muskie angling, beginning in and around the 1880’s and continuing through today, there are certain places throughout the North American muskellunge range that have become famous muskie “hotspots” (some locally only). These spots or areas have become legend and have, over the past (up to) 140 years or so, drawn muskie anglers from far and wide.

Most serious muskie anglers like to “name” many of their favorite spots. This has multiple reasons. First, anglers can talk among themselves at days end and all in the group will know whereof they are speaking. In addition, by naming their spots, they can talk safely without fear that someone outside the group will overhear and jeopardize their “secrets”. However, many named Hotspots in the muskie range cannot be kept secret as they have, over the decades, produced so many muskies that their fame has spread far and wide.

While the majority of the muskie angling population is located in the north central United States, muskie anglers come from far and wide, including all the US States and all Provinces of Canada, as well as from many other foreign countries. The reason I mention this is because some of these famous spots are far from the north central US and will mostly be recognized by the segments of the population that have historically fished the waters where these places exist. Two of the most famous spots in existence are about as far from the north central US as one can get and still be in the muskellunge’s native range. The simple reason for this is the fact that while organized “sport angling” for muskies began in the east central end of Canada circa 1880, settlers in the north central United States were still involved in land disputes and wars with Native Americans. For example, there were battles
that were still going on in Minnesota in the very late 1890’s. So, naturally, the earliest named famous Hotspots were in the east and we shall begin there.

Perhaps, arguably, the oldest Legendary Hotspot is Windmill Point, Quebec. While not always a terribly prolific and consistent producer of big muskies, it has been a focal point for locals for over 140 years, not to mention the occasional tourist. Windmill Point, is located in the Fleuve Saint-Laurent (St. Lawrence River), Quebec just below St. Anne de Bellevue where the Rivière des Outaouais (Ottawa River) dumps into the St. Lawrence River. It is and was often spoken of by members of a long-time angling club in the area, although written about mostly in French language publications. This area knowledge was brought home to me a few years ago when I met one of the club members and his son at a launch ramp nearby. The son was excited to show me their scrap book containing many big muskies caught from the Windmill area…where they spent most of their fishing time in their small aluminum boat.

These 2 following photographs, on two of the earliest post cards that exist, likely date to the late 1800’s from this area and are classic. 40-Acre Shoal
While listed second, this next world-famous area, Forty-Acre Shoal, Ontario may likely be as old as the prior one, and it is most certainly far better known in the muskie world throughout time, due primarily to the fact that is in English speaking waters and highly written about in English publications in the US and Canada as well.
Organized muskie angling was often written about beginning (as far as I have been able to find) in the 1880’s. Forty-Acre Shoal is located near Gananocque, Ontario, Canada, just across the St. Lawrence River from Clayton, New York and not far from Cape Vincent and Alexandria Bay, New York, and Kingston, Ontario, and was heavily fished for muskies beginning in the 1880’s, by the wealthy anglers from both countries. The “shoal” is located not far from the mouth of the St. Lawrence River that begins at the eastern end of Lake Ontario and at the head of the section of the river known as the Thousand Islands, on the Canadian side of the river. This Legendary area was the target of muskie anglers, on a daily basis, throughout the season.

The most common early angling method was using local guides and row-trolling Skinner Fluted Spoons (spinners like used on many of the bucktails of today) with a feather covered treble (gang) hook, from a double-ended St. Lawrence River Skiff. These skiffs were towed to the fishing grounds in a long chain of skiffs by a large motor launch, dropped off and retrieved at the end of the fishing day. I first fished Forty-Acre Shoal in the 1970’s. I had never caught one there the few times I had fished it until 2012. The primary method of angling there has always been either row trolling (early days) or motor-trolling. I was amazed that chilly December 6th day in 2012, to actually see a couple of anglers casting the shoal…tough dudes! We caught 4 that day and lost a 5th (see pics for two biggest, weighed on a certified scale and released). At least two other boats boated monsters that day also. This limited Legendary area, where the river is 7 miles wide, can get quite crowded when the muskies are “in” and it The author above and friend Rich Wren with 51 & 49 pound released muskies caught from 40-Acre Shoal 3 hours apart. Guide Mike Lazarus.
can be amazing! At other times…well, they don’t call it the “Big Empty” for nothing!

Pete’s Bar
This next “spot”, while not nearly as old as the first two, could possibly be the best known Legendary muskie Hotspot in existence due to its location; in close proximity to the heaviest concentration of muskie anglers on the planet. Even though this “spot” wasn’t “discovered” until late 1925, (Peterson’s) Pete’s Bar, is located in the world-famous Chippewa Flowage in NE Wisconsin, near and between the towns of Winter and Hayward. This flowage wasn’t in existence until the Winter Dam was built and the reservoir was filled in 1923. 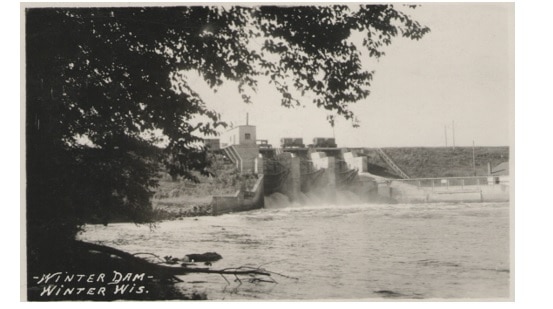 The Winter Dam circa 1941 when the Muskie Hatchery (R) was there.

To quote the late Bob Kutz, “Peter C. Peterson was guiding a Texas couple on this new impoundment in 1925 and left the best area at that time, the mouth of the West Fork of the Chippewa River, often being pounded by “40 to 50 boats”. He was familiar with the land recently flooded and wanted to get away from the crowd. He found a “jut of land that he liked now covered with flowage water”. The Lady caught a 15 pounder on her first cast, and a drift down the bar produced several additional strikes. Pete fished with the White’s for 10 days and they caught 50 muskies, all of which were released except one fine 38-pound specimen. All were caught in this new area which eventually became Peterson’s Bar and later Pete’s Bar. He had it to himself until 1927, when other guides finally learned of the hot new spot.”

In July of 1956, Pete’s Bar would produce three muskies in 35 minutes that would total 106+ pounds! Well known Flowage guide Ken Ackley, who himself landed a 23-pounder during the melee, guided Lloyd Sauer to a 40 ½-pounder and Bill Crawford, fishing nearby caught an even larger 42#-9oz. giant! Needless to say, Pete’s Bar was on the map forever and the numbers of anglers that pounded this ¼ mile long, fairly narrow, sand bar became Legendary. Literally hundreds of muskies have been caught from this “Hotspot” over the past 97 years, however it is now just a shadow of its former glory days! Overfishing in the days of “catch and keep” and more recently the invasion of milfoil and limited stocking has taken its toll on this once great fishery. 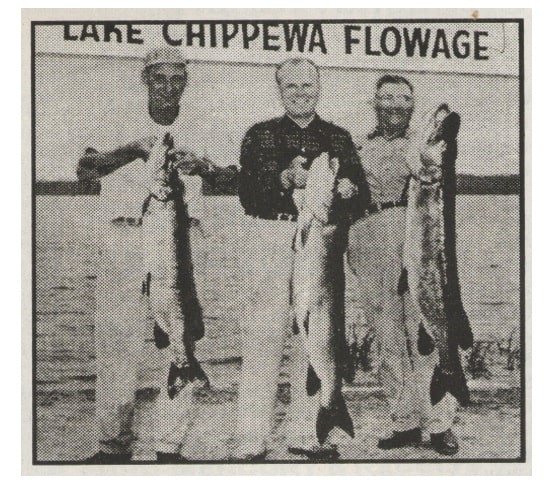 During the late 1950’s through 1970’s, it was nothing to see over 30 boats fishing the Bar and at times, especially evenings. With the right wind blowing, one literally had to “get in line” to make a drift down the Bar! One summer evening in 1957, I was fishing Pete’s Bar with my Mom and Dad and we saw a couple of the many boats nearby hook and land a muskie. One of the boats near us caught a beautiful 32 ¾ pounder. Pete’s was on fire…again!
In circa 1977, well known lure maker and guide, the late Wayne Gutsch of Tallywhacker and Gooch bucktail lure fame, brought Pete’s Bar back to life once again when he caught two 35-pound muskies in 3 casts! However, these catches did not occur on the same day…there was apparently a bit of a celebration after the first catch, and a day or two elapsed before the second one was caught! 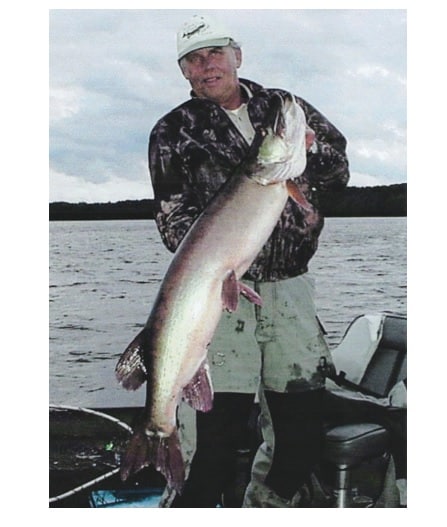 Wayne was a top Chippewa Flowage Muskie Guide and spear-headed the 1979-1986 Muskie’s, Inc. catch and release tagging study on the flowage, the real start of promoting Muskie release, from which a treasure trove of information was learned about Chippewa Flowage muskies. The average size of the muskies caught dramatically increased by the study’s end and increased releasing of caught muskies eight years later. From 1979 to 1986, the percentage of muskies caught over 40-inches increased from only 2.6% in 1979 up to 15.3% in 1986. The number of muskies caught increased dramatically as well during those years. Average annual growth rates of fish tagged and recaptured was over 2½ inches, with some growing as much as 4 or 5 inches or more in a single year! Wayne Gutsch in a not unfamiliar pose.
Well, I will end part l here. These first three locations, in my humble opinion, are the three top World-Famous and Legendary Muskie “Hotspots” in North America. In Part II, I will detail a few more areas, albeit lesser-known places, Legendary, at least in my mind and others, spots that belong on the list.

I am sure that there are many other Hotspots that I am not aware of even though I have fished muskies in 23 states and 2 provinces of Canada over the past 65 years. Any reader who knows of one or more Legendary or famous Hotspots, please let me know with a write-up of same and supporting photos if available and I will include them in a follow-up article(s).
Send it to me at: [email protected]
Thank you!