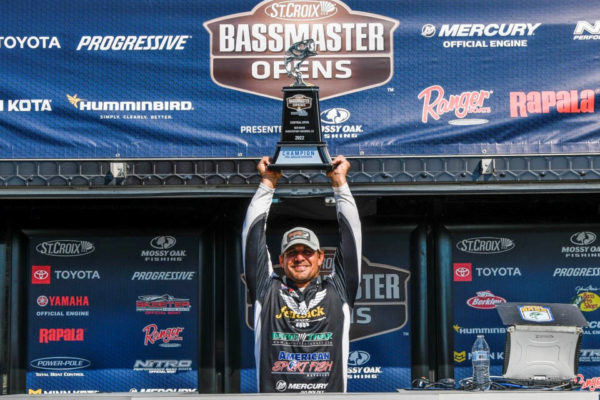 Keith Poche of Pike Road, Ala., has won the 2022 St. Croix Bassmaster Central Open at Red River presented by Mossy Oak Fishing with a three-day total of 37 pounds, 12 ounces. Photo by Andy Crawford/B.A.S.S.

BOSSIER CITY, La. — You might say Keith Poche channeled Frank Sinatra, because the pro from Pike Road, Ala., absolutely did it his way en route to a three-day total of 37 pounds, 12 ounces that won the St. Croix Bassmaster Central Open at Red River presented by Mossy Oak Fishing.

After catching 13-3 on Day 1, Poche trailed the leader by a mere 6 ounces. Matching that weight again on Day 2, he took over the top spot with a 14-ounce margin over Bassmaster Elite Series pro Greg Hackney. Although Championship Saturday saw Poche weigh his smallest bag of 11-6, he edged Hackney by 2 1/2 pounds.

“To do it like I like to do it; to just go get back into stuff, I fish more comfortably like that,” said Poche, who’s originally from nearby Natchitoches, La. “They say fishing is (largely) mental and it is. It’s making good decisions on the water — and when you’re comfortable, you’re going to make good decisions.”

Poche spent the majority of his time in a small backwater area about 10 minutes from takeoff. Having found the area with a drone during pre-practice, he described it as a long, narrow ditch that led to a deeper backwater with shoreline vegetation and laydowns.

Approaching the area required Poche to traverse a treacherously shallow zone. This barrier, he said, would likely prevent a heavier fiberglass bass boat from reaching the fish, but Poche’s vessel was ideally suited for the task.

“I run an 18-foot Gatortrax boat with a 90-horsepower Mercury and that’s the toughest aluminum boat on the market,” Poche said. “That boat is perfect for getting into little places like this. I do what I do — it’s a style of fishing; it’s who I am.

“There’s so much that can go wrong; you can break down, you can get stuck. I’m just so happy it worked out.”

Poche caught his bass by flipping a 3-inch Berkley Havoc Pit Boss rigged with a 3/8-ounce weight and a 4/0 Berkley Fusion 19 hook. Green pumpkin was his top color, but when he ran out, he found black/blue also produced.

Days 1 and 2, Poche got the weight he felt he needed and then left his backwater spot to fish the remaining hours on main-river structure. Both days he made key afternoon culls by flipping random cover, but the final day saw Poche committed to his top spot.

“You have to manage these fish when you get back in these places,” he said. “I didn’t have a lot back in there; it’s not like I was running around and fishing a lot of spots. It’s just one of those deals where you go with it and see what happens.

“It wasn’t just that hole that got me to the win; it was making good decisions to manage those fish and go out to the main river and get those big bites to carry me into the final day so I could stick it out in there and catch all I could catch.”

Poche took home the $48,100 top prize and earned an invitation to fish the 2023 Academy Sports + Outdoors Bassmaster Classic, to be held in Knoxville, Tenn., March 24-26.

Spending most of his time in Pool 4, Hackney found his bass by looking for areas of greater current flow. September on the Red River typically sees slow water movement, but surges for lock releases often triggered bites.

“Anytime I get to fish in the state, I like to,” Hackney said. “I like to fish at home and I don’t get to do this much because I do a lot of traveling. But it’s been a good week; it’s been fun.”

Noting that he caught his fish on a spinnerbait, a Strike King Sexy Frog and a Texas-rigged Strike King Rage Bug, Hackney said the key to his success was getting around concentrations of baitfish.

“The river is really healthy now,” he said of the Red River’s upward trend, after altering floods of 2015 and 2016. “It’s crazy how many shad are in the river. I’ve been all the way to Pool 3, Pool 4 and all the way up here to Pool 5 and every pool is exactly the same.

“There’s just so much bait and the vegetation is coming back. There’s grass and pads in the backwaters.”

“It was really tough; the secret this week was water and sunscreen,” Gaston said. “Three fish is what I thought I was going to have the first day and the second day, so I needed a crash and this was a good day to do it because I could only finish 10th.”

Gaston leads the Central Open standings with 393 points. Jimmy Washam of Covington, Tenn., is second with 390, followed by Risinger with 371, Doug Guins of Lake Charles, La., with 366 and Nick LeBrun of Bossier City, La., with 362.

The tournament was hosted by the Shreveport-Bossier Sports Commission.