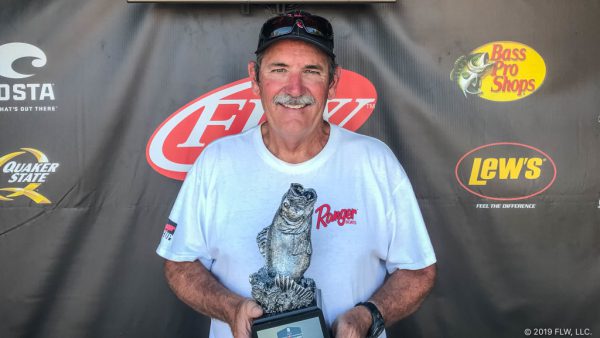 Fishing in his 200th tournament with FLW, Schroeder said he primarily fished brush piles with a 9/16-ounce green-pumpkin jig with a Zoom Salty Pro Chunk.

“It was sheer knowledge of the lake that allowed me to win,” said Schroeder, who earned his sixth career victory. “I started out on Saturday trying to get something established, so it took me a couple of hours to figure it out. I tried topwater around some stumps and rock. For some reason these fish aren’t on stumps right now, I guess the water hasn’t cooled down enough. They’ll get on stumps in the next two or three weeks, but I never had a single bite on stumps. Once I started fishing those brush piles I started getting bites. I probably fished 20 on Saturday and 30 or 40 on Sunday, and I still had more I could have fished.”

Plagued by lost fish on Saturday, Schroeder turned it around in a big way on Sunday. Starting off with a fish on a bone-colored Evergreen Shower Blow topwater bait, he turned to the brush piles the rest of the day.

“It’s old-school fishing. It’s the way I like to fish, and it’s the way I’ve been fishing all my life,” said Schroeder. “Once I got in the meat of the brush pile I kept my jig in them as long as I could, and if I didn’t get bit I went on to the next one.

“At 10:20 on Sunday I had two fish and I made a decision to go south of Paris,” Schroeder said. “As I was running I came by some buoys and saw the current was pulling pretty hard. So, as I ran toward Paris I actually changed my location and started fishing some brush piles out in the lake, and I was glad I did, because I caught two on the first one I stopped on and two on the next one.”

Schroeder said he never fished south of Kenlake on Saturday, and primarily fished brush piles in the bays on the first day. Though he fished deeper piles on both days, Schroeder said that brush in about 12 feet was the best.

“It’s been a while since I won one,” said Schroeder of his win. “I think it’s time on the water that’s killing me, because my fishing on Saturday was really, really rusty. If I’d have been fishing four days a week like when I was winning a lot I might have done even better.”

Scott McGlinchey of Dexter, Kentucky, caught a 7-pound, 2-ounce bass – the heaviest of the event in the Boater Division – and earned the event’s Boater Big Bass award of $457.

McBride caught the largest bass in the Co-angler Division, a fish weighing in at 5 pounds, 15 ounces. The catch earned him the event’s Co-angler Big Bass award of $229.

The top 45 boaters and co-anglers in the region based on point standings, along with the five winners in each qualifying event, will be entered in the Oct. 17-19 BFL Regional Championship on Lake Guntersville presented by Mercury Marine in Guntersville, Alabama. Boaters will compete for a top award of a Ranger Z518L with a 200-horsepower outboard and $20,000, while co-anglers will fish for a new Ranger Z518L with a 200-horsepower outboard.