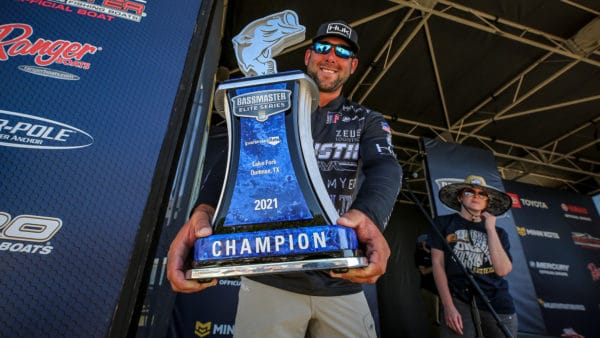 Lee Livesay, of Longview, Texas, has won the 2021 Guaranteed Rate Bassmaster Elite at Lake Fork with a four-day total of 112 pounds, 5 ounces.

As the 32nd individual to enter the prestigious Bassmaster Century Club (a five-fish limit of 100 pounds or more), Livesay outpaced Day 1 leader Patrick Walters by a 10-pound margin. Along with his second Elite trophy — his first came last fall at Chickamauga Lake — Livesay won a first-place award of $100,000.

For Livesay, it was a monster final-day limit that weighed 42-3 and ranks as the third-heaviest, single-day weight in Bassmaster history that sealed the deal.

“I have no words right now, it’s amazing,” he said. “I’ve been around them, but I haven’t caught any big ones all week; I just survived. Everything just worked out and it never goes like that.”

Hailing from Longview, Texas, Livesay made no assumptions and fished hard until the last minute. But when the smallest bass in your five-fish limit goes 7 pounds, 6 ounces, good things are likely.

Spending his tournament in Little Caney Creek, Livesay rotated among several secondary points where bass were chasing big gizzard shad. His main spot — a bar extending off a small island — allowed him to sneak into range of bass schooling on the opposite side without spooking them.

On Sunday, the latter produced all of his weight fish. A 7-foot medium-heavy Halo HFX cranking rod and 40-pound braided line was essential for reaching distant fish and keeping them connected.

“Those fish are wanting to feed up and they’re seeing so many swimbaits, they’re just not eating them,” he said. “I kept getting bites and I kept throwing it.

“Working that big topwater really erratic and just getting them to react was the deal. I think they really think it’s a shad.”

Livesay kept himself in the hunt all week, starting with a seventh-place bag of 25-6 on Day 1. He slipped two spots on Day 2 after catching 17-14, but put himself within striking distance on Semifinal Saturday by adding 26-14 and improving to fifth.

Overcoming the hometown curse — succumbing to the pressure of local expectations — made Livesay’s victory even sweeter.

“I’ve spent thousands of days with clients and fun fishing on this lake,” Livesay said. “I never thought I had it. I knew I was around them, but I never thought I’d catch 42 pounds.

“So, doing it in front of family and friends, and a lot of sponsors were here, too, it’s just amazing. I couldn’t ask for anything better.”

Hailing from Summerville, S.C., Walters started strong this week by leading Day 1 with 32-14. He slipped to third on Day 2 with a smaller limit of 15-7.

Walters got back on track Saturday with 22-13 and reached the final round in fourth place. Adding 31-3 Sunday, he tallied 102-5 and was the only competitor to break 30 pounds twice.

He did most of his work at the mouth of Little Caney where prespawners were staging on the breaks. Leveraging his forward-facing Garmin Panoptix LiveScope, he fished a mix of jerkbaits, swimbaits and topwaters.

After a slow start, Walters got rolling with a midmorning rally that produced several big topwater bites. He steadily chipped away at the lead Livesay had built for much of the morning until the leader’s midday rally put the event out of reach.

“The topwater came into play huge today, as expected,” he said. “One to 3 o’clock has been my window. I was just pacing around, hitting as much as I could and looking for bait activity.

“When that water temperature got warm throughout the day, they would come up and get active. And when the wind pushed those shad against the bank, they showed themselves.”

Seth Feider of New Market, Minn., leads the Bassmaster Angler of the Year standings with 436 points. Walters is in second with 432, followed by Drew Cook of Cairo, Ga., with 387, Livesay with 385 and Chris Johnston of Peterborough, Canada, with 384.

Josh Stracner of Vandiver, Ala., leads the Rookie of the Year standings with 333 points.

The tournament was hosted by the Sabine River Authority and Wood County Economic Development Commission.