DECATUR, Ala. (July 21, 2020) – The 2020 Toyota Series Southeastern Division will continue with a tournament next week in Decatur, July 30- Aug. 1, with the Toyota Series at Wheeler Lake. Hosted by Decatur Morgan County Tourism, the three-day tournament will feature the region’s best bass-fishing pros and co-anglers casting for a top prize of up to $65,000, plus a $35,000 bonus if the winner is a qualified Phoenix Boat owner. 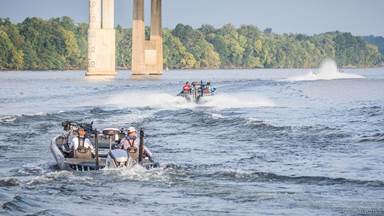 “This is going to be a fun tournament to watch,” said Major League Fishing pro Jesse Wiggins of Addison, Alabama, “I think it is going to play out very similar to the FLW Cup event that John Cox won here in 2016. There will be some fish out deep, but it won’t be a complete offshore tournament.

Wiggins said that if he was competing in the event, he’d have a drop-shot rig, a jerkbait, a shaky-head rig and a shallow-diving crankbait all tied on.

“It’s summertime in Alabama so it may be a grind, but we’re going to see some good limits,” Wiggins went on to say. “I think a guy is going to have to average 15 to 16 pounds a day to be there at the end. I predict the winner ends up with a three-day total of 48 to 50 pounds.”

Anglers will take off daily at 6 a.m. CDT from Ingalls Harbor, located at 701 Market St. NW, in Decatur. Weigh-ins will also be held Ingalls Harbor and will begin at 2:30 p.m. Attendance is limited to competing anglers and essential staff only. Fans are encouraged to follow the event online through the “FLW Live” weigh-in broadcasts and daily coverage at FLWFishing.com.