BENTON, Ky. (Nov. 21, 2019) – Fishing League Worldwide (FLW) announced Thursday the schedule, rules and entry dates for the 2020 FLW College Fishing presented by YETI season, highlighted by the FLW College Fishing National Championship on the Harris Chain of Lakes in Leesburg, Florida, and advancement opportunities for anglers to compete in the Bass Fishing League (BFL) All-American and the FLW Series Championship. All teams also now have the freedom to add as many nonconference tournaments to their schedule as they like. 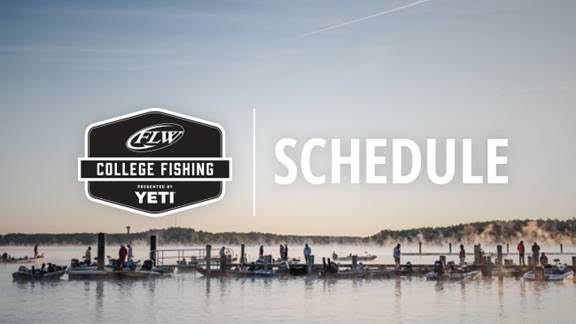 “Opening up conferences for participation by nonconference teams was a request several schools had this season, so we are glad to extend this opportunity to all teams in 2020,” said Kevin Hunt, FLW Senior Director of Tournament Operations, College and High School. “This change will allow teams the opportunity to travel and fish incredible lakes and rivers that are not in their conference. It also gives teams more chances to qualify for the National Championship while maintaining the prestige of our conference and overall School of the Year titles.”

Registration for teams wanting to compete in the 2020 FLW College Fishing tournaments is now open. Teams can register at FLWFishing.com or by calling 270.252.1000. The entry fee is unchanged for 2020 at $75 per team for teams entering prior to onsite check-in. The onsite entry fee is $100 per team.

(Open to teams from all conferences)

Top 20 teams advance to the 2021 National Championship. One additional team advances for every 10 teams over 200 competing.

(Open to teams from all conferences. Nonconference teams do not earn School of the Year points.)

Top 10 teams advance to the 2021 National Championship. One additional team advances for every 10 teams over 100 competing.

Complete rules for the 2020 FLW College Fishing presented by YETI program can be found online at FLWFishing.com.

About FLW
FLW is the world’s largest tournament-fishing organization, providing anglers of all skill levels the opportunity to compete for millions in prize money across five tournament circuits. Headquartered in Benton, Kentucky, FLW and their partners conduct more than 290 bass-fishing tournaments annually around the world, including the United States, Canada, China, Italy, South Korea, Mexico, Namibia, Portugal, South Africa, Spain, and Zimbabwe.

FLW tournament fishing can be seen on the Emmy-nominated “FLW” television show while FLW Bass Fishing magazine delivers cutting-edge tips from top pros. Acquired by Major League Fishing in late 2019, FLW programming expands in 2020 to the Outdoor Channel and the Sportsman Channel as well as on-demand at MyOutdoorTV (MOTV).