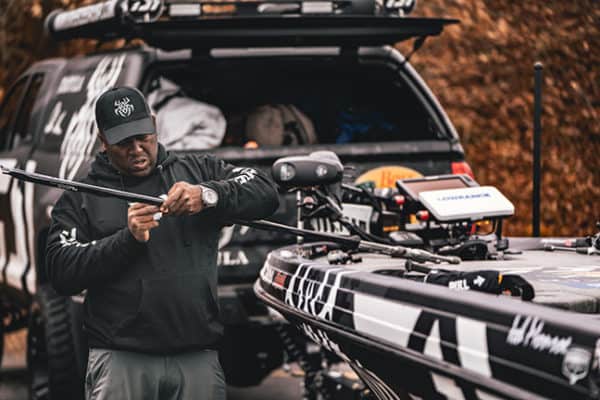 Cypress, CA (August 31, 2020) – Some wins come down to the wire, others are by a landslide. For Oakdale, California’s Ish Monroe the latter was certainly the case as he weighed hefty bags throughout the three-day tournament—a total of 65-13 for 15 bass—edging out second place by a margin of 16-pounds, 7-ounces—the third-largest margin of victory in Toyota Series history.

“I was really looking forward to this tournament because it’s basically in my backyard. There isn’t another body of water in the country that I understand as well as the California Delta. I said I was going to spend the time out there practicing and fish how I know it’s going to take to win. That’s usually punching mats and froggin’, especially in the summer. The fish get under the vegetation where there’s shade and baitfish. I always say where there’s bait there’s bass,” remarks Monroe. “Punching and froggin’ come down to the equipment. You don’t use a hammer to screw in a screw. When it comes to punchin’ you have to have the right rod, the right reel, and the right line or you’re not doing it correctly. You’re going to miss fish, lose fish, or not even get the bite at all. The same thing with a frog—you’ve gotta be able to make the right cast, have the backbone to the rod, the large handles—those are the kind of things that are important,” comments Monroe.

The first day of the tournament Monroe says he pulled a bit of an audible. “I had about a half hour of slack tide where I really wanted to go fish so I had a spot where the tide had already made its move—it’s already on the outgo and we’re going to stop and I knew it to be a pretty consistent spot. I wanted to get a bite or two just to get comfortable to give the area farther south the time to get the water moving. Then, by 8:30, I’ve got 21 pounds in the boat. Having discussions with some friends of mine it seemed 20 pounds a day was going to win the event, so if I could go out and get 20 pounds the first day and not hit any of the stuff that I had intended on fishing, I knew I was already ahead of the game. So, by 8:30, I had literally punched mats to 21 pounds.” “On Day two the tide was already moving so I decided to stop where I caught the fish on day one and they were biting. But it’s day two and cut day so I said I’m not going to hold anything back. I had 17 pounds in the boat when I left the spot to head down to my primary area. I made one pass on one stretch, caught a 7-pounder and a 4-pounder and left because I knew I had over 20 pounds again.”

He caught the 7-pounder and the 4-pounder on a frog. His gear for the froggin’ regimen included a River2Sea Ish Monroe Phat Mat Daddy Frog fished on a 7-foot, 4-inch heavy Daiwa Tatula Elite rod with a 7.1:1 Daiwa Tatula Elite reel spooled with 55-pound-test Daiwa Samurai braided line.

He says day three was pretty comfortable. “I had a six pound lead and I went back to the same place I had started the first two days and just picked a little bit different section of it and I caught a two-pounder and a five-pounder right away. That settled me down to fish through the area and catch a limit. I was punchin’ and froggin’ both. So I ran down to the water I had intended on fishing for the tournament and ended up froggin’ a keeper and the stretch I had caught the two frog fish before they really weren’t biting that well. The tide was still slowly going out, so I made an adjustment to go punch another stretch and ended up catching another 7-pounder and another 4-pounder. Once I did that, I knew it was over. I had over 20 pounds again and a six-pound lead and 20 pound sacks were hard to come by.” Ultimately, Ish would finish some 16-pounds, 7-ounces over second place, earning him the top payout of $23,420 in the second tournament of the 2020 Toyota Series Western Division.

Looking forward, Ish is gearing up for more tournaments. “I’ve got some more team tournaments coming up—one is actually on Clear Lake where I won right before the Toyota Series win. I won a tournament there on a frog and the conditions are going to be pretty much the same. Hopefully, they’re still eating frogs because it’s fun and you have the opportunity to win!”