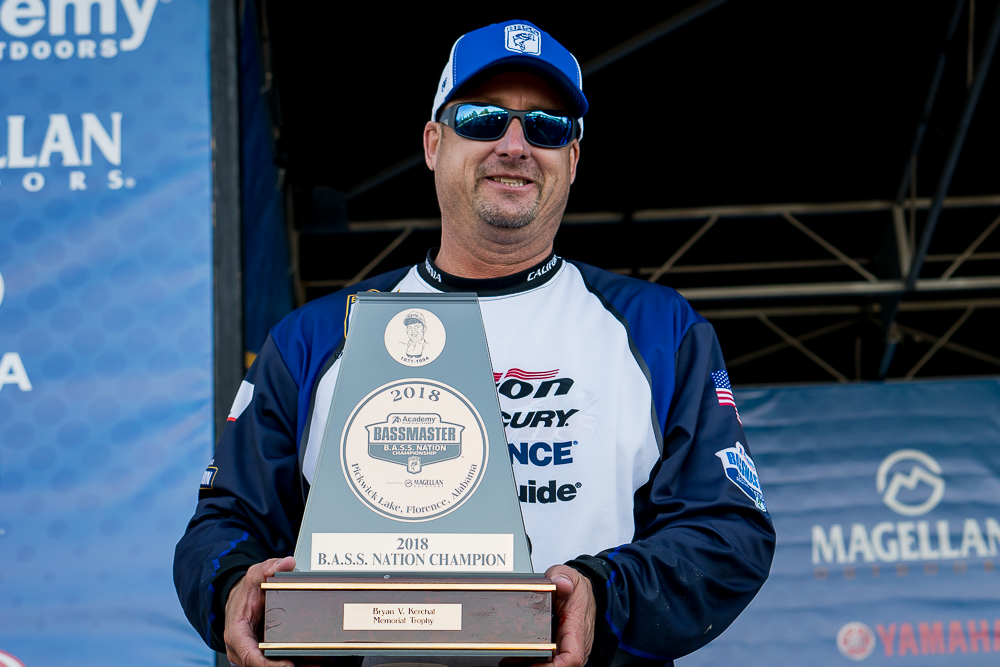 Pierson of Oakdale, Calif., encountered the best of worst-case scenarios during the October visit.

“Every fishing scenario I could possibly come across on Pickwick happened while I was there,” said the Oro Madre Bass Anglers club member.

High water and tough post-front fishing conditions were all in play. As fate would have it, those same conditions prevailed this week.

Today, Pierson weighed 15 pounds, 8 ounces to complete his winning catch of 55-11. Kyle Dorsett of Odenville, Ala., finished second with 51-14, while Jacapo Gallelli of Firenze, Italy, took third with 46-4.

Pierson, Dorsett and Gallelli received invitations to bass fishing’s most prestigious event, the Bassmaster Classic presented by DICK’S Sporting Goods. The Classic is March 15-17, 2019, in Knoxville, Tenn., where the anglers will compete for a total purse of $1 million on the Tennessee River.

Pickwick’s water level rose 7 feet during Pierson’s rainy scouting trip. The Tennessee Valley Authority responded by releasing massive amounts of water from Wilson Lake into Pickwick. Pierson then took a crash course in how to pattern fish in strong current, which helped him win the tournament.

There was more of the same this week and the current put Pierson’s lesson to the test.

“It was all about the current,” he said. “When the current turned on, so did the fish.”

The current got stronger each day, ideally playing into his hand. Pierson rotated through areas where the bass sought refuge from the strong flow – behind rocks, bluff walls and points – where they fed on passing baitfish.

Timing was everything. Pierson located so many prime areas that eventually he would end up where the fish were actively feeding. When a stop at one area failed to produce he moved on to the next spot.

“Having plenty of areas to go through, which I found during the scouting trip, allowed me to increase my odds of eventually catching them sometime during the day.”

Early in the tournament he found the bass positioned on the extreme outside edges of the current breaks. As more water was released the fish moved away from the edges.

Pierson made his lure presentations down current in the swift water, which was nothing like he had experienced before.

He rotated through three lures for the win. A 1/4-ounce homemade hair jig with a Zoom trailer was his most productive bait. Alternatively, he used a 1/8-ounce homemade darter jighead with a 3.3 Keitech Swing Impact FAT Swimbait. A 5/8-ounce Zorro Aggravator Spinnerbait was another choice.

“I caught all 13 of my keepers from one area,” he said. “It was a textbook kind of spot that really held a lot of fish in the strong current and the more of it, the better.”

Dorsett used a 1/2-ounce Kajun Boss Outdoors Spinnerbait without a trailer to catch all of his fish.

Gallelli became the first Italian angler to qualify for the Classic. His campaign to earn it was serious, considering the fact he bought a new fully rigged bass boat to fish the championship.

Like the other top finishers, he concentrated on current breaks created by rocks near the river channel. A 3/8-ounce spinnerbait was his best lure.

Pierson, Dorsett and Gallelli also earned the “Nation’s Best” package, which includes paid entry fees into the 2019 Basspro.com Bassmaster Opens Series division of their choice, and the use of a fully rigged Phoenix boat for the year.

The championship is the only international competition of its kind for bass club anglers. Competing were qualifiers from 47 states and 10 foreign nations. Canada, Mexico, Australia, Japan, Portugal, France, Italy, Zimbabwe, Namibia and the Republic of South Africa were represented.

The Florence/Lauderdale Convention and Visitors Bureau was event host.