With anglers chomping at the bits to get back to fishing, the Alabama Bass Trail North Division was back in action this weekend. The previous two events have been re scheduled for later this year, so anglers picked the season up with stop number 2 on Weiss Lake in Cherokee County, AL. With 22.60 pounds of all largemouth, the team of Mark McCaig and Tim Hurst took a commanding win on Weiss Lake with 6-pound lead over the rest of the field along with $19,250 in winnings and bonuses.

Mark and Tim spent a day and a half practicing in separate boats where they both found their own areas they thought they could catch some fish. However, neither of them felt the areas they found were winning areas. They both had a decent bite in one similar area and decided the night before they would go to that area to get started and try to fish something new in that area. 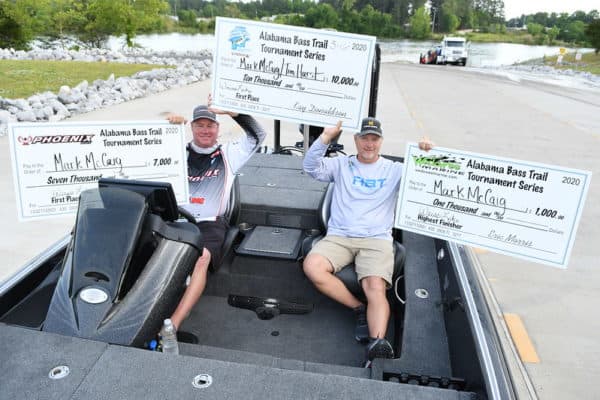 At the first stop, they caught three and a half and five pounders that “clued them in to what they had been missing in practice.” Mark said, that clue was “I felt like a lot of fish were still spawning but had expected this to be a post spawn bite with most of the fish out deep.” Once we realized it wasn’t a deep bite this morning “we started running around fishing similar areas upriver all the way down to the dam.”

The team said they “targeted fish in the spawning areas”- not necessarily bed fishing but primarily fishing shallow areas where fish were spawning or headed to and from spawning. Mark said, “we realized that the farther we went back in pockets, the smaller the fish were, so we targeted shallow areas instead of the backs of pockets.” They caught their fish primarily on two baits; in the morning, they started with a Spro Poppin frog, and later in the day when it got tough, they used a Bass Pro Shops Green Pumpkin Senko.

The up and down temperature changes in the seasonal weather have broken up the spawn cycle on Weiss causing this lake to fish tough for a couple reasons. Mark said “there are fish in many different stages and there is a lot of shallow water in this lake, so when these fish get post-spawn, they can be 50 yards off the bank and still be in shallow water. You can go through an area and you might be around the better fish, but you can’t get them to bite because they are so spread out.” It is really hard to target and catch post spawn fish. Mark said “winning a tournament with 225 boats is more about the decisions that you make during the day or the maybe decisions you make to start somewhere more so than fishing ability. This field is packed with great fishermen who all have the same fishing ability, and there are a lot of winners here.” Their key decision today was to “sit down before we made move, look at the map and say if the fish spawned here, this is where we are going and just try and catch them somewhere in between.” 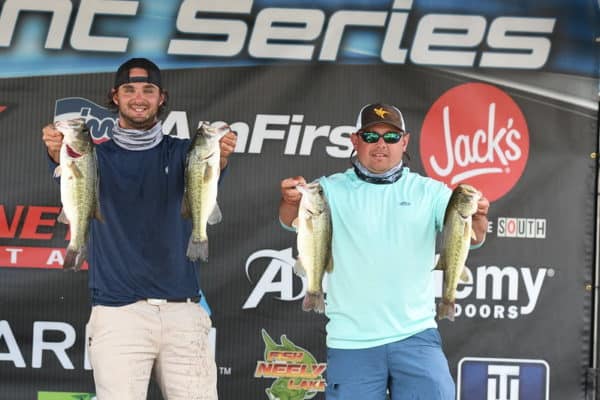 Second place went to Stephen Mcavoy and Josh Butts with 16.14. They started their morning on a shad spawn point that was about two feet deep. Their second cast with a Booya Buzz Clacker in white caught a four pounder. On the third cast, they caught a three pounder. Within ten minutes they had a limit that was pushing 12 pounds. They described this point as a mid- pocket point with grass right next to a wooden seawall.

The shad spawn was over in about an hour, and from there they tried to fish docks, but it didn’t pan out. So, they went back to the grass and started catching fish and made a few culls using a Dirty Jigs White Sim Jig. They, like others, found them in the back of pockets, but they were the smaller fish. The team felt that the better fish were moving out of the pocket and heading to deeper water. So, they targeted them about mid-way out and caught better fish there. Third place was separated by just two hundredths of an ounce with the team of Bryan Dowdy and Kyle Lewellen weighing in at 16.12 pounds. They caught them flipping a Strike King Rage Craw and swimming a Dirty Jigs 3/8 swim jig in white with a Strike King Menace trailer. They targeted shallow grass areas in the Yellow Creek area. They said they “didn’t catch a fish over two-feet deep. “First, we went to a couple bed fish spots we found in practice and caught one off the bed but couldn’t find the others.” They spent the rest of the day “junk fishing” their way into third place. They caught over 20 fish up until 11:00 when they got their last bite. They had a mixed bag of two spotted bass and three large mouth.