Tungsten Super Shot is Changing the Game for Turkey Hunters Tungsten Super Shot is Changing the Game for Turkey Hunters

Nothing is more rewarding than punching that tag on a Tom you had been chasing. Fall is almost here, and the thrill of the chase is upon us again. Fall Turkey hunting has its challenges, as the Tom’s are no longer eager to find a hen to breed and are not as responsive to calls. In the Spring, turkeys will roost in the same general area, but during the fall, they spread out and can be harder to pin down. As a result, you may find it harder to get the birds to come within range for a shot, and you may leave the field empty-handed. However, ammunition has made giant leaps and bounds, and now with TSS available, you may find yourself bagging that fall turkey with ease.

Tungsten Super Shot flies farther, hits harder, and penetrates deeper than any other shot on the market. The benefits come from tungsten’s higher denser compared to any other pellet material. Tungsten is 60% more dense than lead. Therefore, you can reduce shot size and increase pattern retention at longer distances compared to heavier steel or lead loads.

Since Tungsten Super Slam TSS is denser, harder and smaller, it maintains its shape longer and has significantly higher penetration energy. This means you will have more shot hitting your bird and penetrating deeper, ensuring a clean kill at longer distances. For example, the Tungsten Super Slam TSS Turkey Loads #9 shot has 720 pellets, and Winchester’s Double X #5 shot has approximately 311 pellets. When shooting Tungsten Super Slam TSS Shot, instead of having 311 pellets flying at your turkey, you’ll now have 720 pellets that will hit harder and deeper. So the next time that Tom gets hung up outside of your normal range, you won’t have to worry. 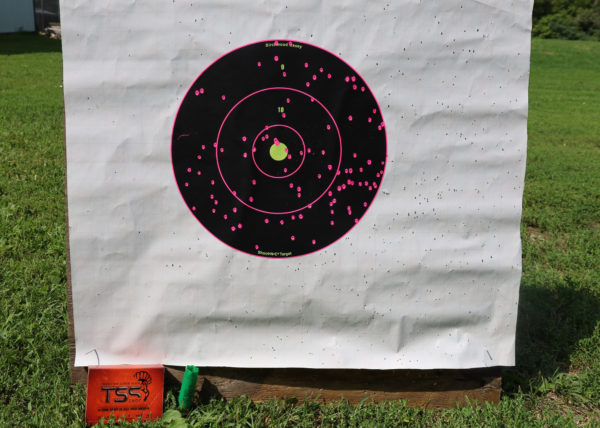 As you can see, the TSS holds a tighter pattern and has significantly more pellets in the kill zone. Now, if this target was a turkey, think about how many more pellets will strike that bird with the TSS verses the lead. I don’t know about you, but I would choose TSS over lead if I wanted to ensure a successful kill. TSS is becoming more popular among turkey hunters for this very reason. I recommend using a modified choke tube that can handle tungsten. Again, check before shooting, not all choke tubes can take tungsten.