One of the most prized fish in the Northeast is undoubtedly the striped bass. They are revered for their fighting ability and have the hearts of anglers throughout the region. Over the years, common knowledge said that the striper’s migration route is coastal, running from Massachusetts and New York to Maryland and down to Virginia.

Some of that groupthink was turned upside down in 2019 with two stripers that were satellite tagged by Gray FishTag Research (GFR). The research showed a much different migration route than anyone had imagined. They have since replicated that in subsequent studies with other tagged fish.

The tagging efforts are showing a new light on one of the most popular sportfish in the Northeast. About Gray FishTag Research and How it All Started

Collecting data on popular sportfish has many benefits, with the data being helpful for better understanding the migration of fish and many other interesting tidbits of information. Fisheries managers also seek out information to develop size and creel regulations. While the data is in high demand, collecting it can be challenging to obtain and often unreliable.

Understanding this predicament, Bill Dobbelaer, President of GFR, had the vision to incorporate charter captains to help. Gray Taxidermy’s relationship with over 10,000 captains and mates worldwide could be used to easily tag fish caught by clients as they are on the water almost daily.

“Bill was close friends with my late colleague and friend, John DeVries, who was a long-time Seaguar employee and avid Seaguar fan,” said Gerry Benedicto, Seaguar General Manager. “Bill approached us in 2016 with the idea of Seaguar becoming a sponsor and we were immediately interested. We were particularly interested in real-time data collection from the tags, especially because it was being done internationally. That was something we had not seen before in saltwater gamefish tagging and we wanted to be a part of it.”
Grey FishTag Research Since they developed the program in 2015, GFR has provided everything the captains need to start tagging, with thousands of green spaghetti tags distributed yearly along with applicators, data cards and instructions on how to use them.

GFR records these tags and the data is provided free to the public and other interested parties. As fish are recaptured and reported, that information is updated to understand the migratory movements of fish better. There have been over 70 species tagged and the angler gets to name the fish whatever they choose.

“The tagging program started with the green spaghetti tags and upon recovery, we get valuable data,” said Roxanne Willmer of GFR. “Then, we began to use long-term satellite tags on roosterfish, showing more detailed migratory patterns of the fish.”

The GFR tagging is something that Seaguar has been part of for several years. “The first game fish Seaguar sponsored was roosterfish in Costa Rica,” said Benedicto. “That first tagging expedition was done in memory of John DeVries and was co-sponsored by Costa and the Guy Harvey Ocean Foundation. We also supported the program by providing our Threadlock braid, fluorocarbon leader, and tools to help the captains.” At the 2018 annual meeting, the discussion was “why not use satellite tags on striped bass?” and a new project was born. The fish were large enough to carry the tags and there were many questions about their migration routes after stories of seeing them offshore.

“There were discussions of fish being seen far offshore, from those including Capt. Dave Marciano of Wicked Tuna, who had reported seeing huge schools of stripers off the coast of Massachusetts at Georges Bank,” she said. “The response to that was, “are you serious?” and he was right. Our first satellite tags showed that the fish we tagged traveled much further offshore than anyone thought they would.”

The MiniPAT satellite tags that are used track large-scale movements of fish that do not spend time near the surface and they are programmed for either four or six-month deployments and will release from the fish at that time. The sensors within the tag track depth, sea surface temperature, and geo-location and the data begins to transmit after reaching the surface.
Grey FishTag Research Then, GFR works with the local community to recover the tag and offers a cash reward for whoever finds it. Since the program started, they have been retrieved on beaches and in the water.

“We are very confident in the data we have received from the tags,” said Willmer. “It’s been fascinating to see the data and also poses more questions about whether only large fish go offshore. Do they seek different salinity, or is it for another reason?”

The program began in 2019 with two fish tagged in the Hudson River, one named “Liberty” and one “Freedom” for their proximity to the Statue of Liberty. One of the tagged fish, called “Freedom,” was tagged and headed toward the Hudson Canyon, spending over a month in deep water. “At first, there was a lot of skepticism from the data because it goes against what everyone has thought,” she said. “The common thinking was that fish migrated north and down to Virginia along the coastline, moving into freshwater estuaries to spawn. We are not saying every fish travels that far offshore during migration; we only know the data from our tags.”
The 2022 Northeast Striped Bass Study

In May, GFR gathered local captains, fishing media, and supporting sponsors, including Seaguar for the Northeast Striped Bass Study. The event was out of Raritan Bay, New Jersey and the primary goal was to tag three fish with satellite tags. The fish included “Pappy Jim,” a 40-inch fish, “Van Staal,” a 48–inch specimen and the 40-inch “Seaguar Striper.

When Seaguar learned of the striped bass tagging, the team wanted to be part of it. “What we love about the GFR project is reading reports about the tags being recovered and then being able to see the migration data of the game fish,” said Benedicto. “It’s fascinating and you can learn so much about the fish. Seaguar has sponsored these tags for striped and blue marlin, sailfish, swordfish, and now striped bass.”

On May 12th, 2022, “Seaguar Striper” was caught by angler Frank Garcia aboard the “Fin Chaser” with Captain Frank Waggenhoffer. Garcia captured the specimen while trolling using a 40-pound Seaguar Inshore Fluorocarbon leader.

Unfortunately, data was inconclusive for this event as the tag “Seaguar Striper” deployed prematurely and “Pappy Jim” stayed too close to land masses such as buildings along the coast and the data was unreliable. 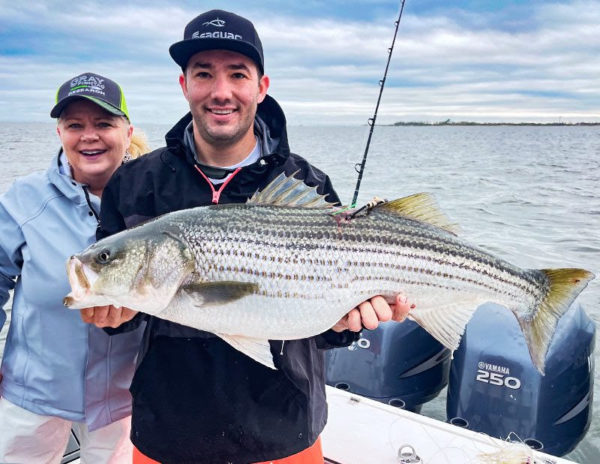 The tag in “Van Staal” remained intact for the full 120-days but stopped transmitting and sending data after just one day. This could have been that the tag became buried or physically destroyed or recovered by an individual.

While there was some disappointment from this study, this trip was not a total loss. In addition to the three fish tagged with satellite tags, 75 specimens were outfitted with green spaghetti tags. The awareness and information from the event will help to further GFR’s efforts to track striped bass and other species in the future.

“This type of research work comes with great risk, expense, and pressure for the tags to perform as we expect,” said Willmer. “It is a great reminder that we need more funding to continue this research work to deploy more tags.”

While the group may have struck out for this trip, the program’s success rate has been good. “To date, we have tagged 15 striped bass with MiniPAT satellite tags and eight of them have been recovered, giving us valuable data,” said Willmer. “This year, there have also been 50 stripers with green spaghetti tags that were re-caught and reported, helping more information about their movements.”

The GFR tagging program operates thanks to generous donations from sponsors, research centers and contributors. To get involved or to make a tax-deductible donation, you can visit www.grayfishtagresearch.org or contact Roxanne Willmer at [email protected]